History of the Ainu 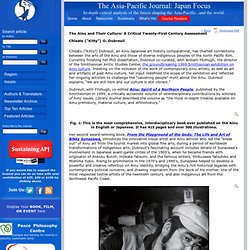 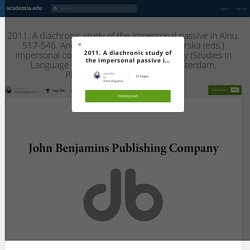 Or-o wa ‘from the place of’ for animate actors (1b) or ‘by’ for inanimate actors (10), which is rather uncommon cross-linguistically (Siewierska 1984: 174). Recommended readings on Ainu people. A recently published photo collection put together over a span of almost two decades explores the traditions of the Ainu through a portrait of a woman and her extended family in Nibutani, Hokkaido. 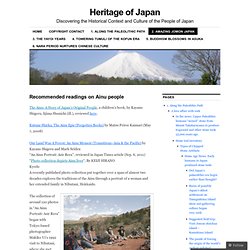 The collection of around 120 photos in “An Ainu Portrait: Asir Rera” began with Tokyo-based photographer Makiko Ui’s 1992 visit to Nibutani, where she met Yasuko Yamamichi, an Ainu. Asir Rera is Yamamichi’s Ainu name, meaning “new wind.” Yamamichi has lived a communal lifestyle, adopting children as well as acting as a foster parent. She has also accepted lodgers from elsewhere in Japan and abroad who had a variety of aims, including studying Ainu culture and engaging in spiritual contemplation. To attract readers, the photo book provides captions in both Japanese and English, Ui said. Some photos in the book show children and lodgers at Yamamichi’s house practicing traditional Ainu songs, called “upopo,” and a dance called “ku rimes.” Ainu Success: the Political and Cultural Achievements of Japan’s Indigenous Minority アイヌの成果−−日本先住少数民族の政治的文化的業績.

Ainu Success: the Political and Cultural Achievements of Japan's Indigenous Minority Simon Cotterill Discourse on indigenous peoples tends to be a discourse of unhappiness. 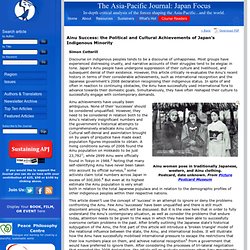 Most groups have experienced distressing cruelty, and narrative accounts of their struggles tend to be elegiac in tone. Ainu History and Culture. The Ainu People "Ainu" means "human". 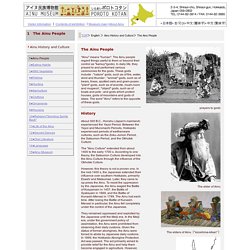 The Ainu people regard things useful to them or beyond their control as "kamuy"(gods). In daily life, they prayed to and performed various ceremonies for the gods. Ainu Identity and Japan's Identity: The Struggle for Subjectivity. 4were incorporated into Japan proper, becoming the 'Northern Gate of the Empire'. 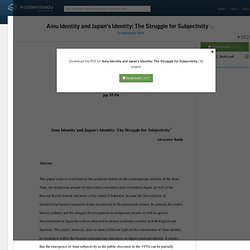 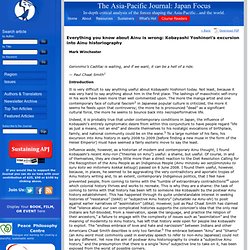 Indeed, it is probably true that under contemporary conditions in Japan, the influence of Kobayashi’s entirely symptomatic desire from within this conjuncture to have people regard “life as just a means, not an end” and devote themselves to his nostalgic evocations of birthplace, family, and national community could be on the wane.3 To a large number of his fans, his excursion into Ainu history in early 2008 to 2009 (before finding a new muse in the form of the Heisei Emperor) must have seemed a fairly esoteric move to say the least.

It goes without saying that Kobayashi himself comes nowhere near to breaking down this phenomenon. Where, since when and how have the Ainu People existed? Japan’s Resilient Native People, the Ainu. Who are the Ainu people? According to genetic tests, the Ainu people belong mainly to Y-DNA haplogroup D2 (a haplogroup that is found uniquely in and frequently throughout Japan including Okinawa with its closest relations being Tibetans and Andaman Islanders in the Indian Ocean). 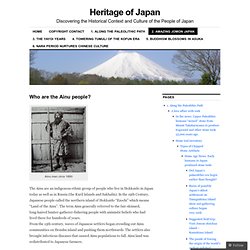 On the paternal side, the vast majority (87.5%) of the Ainu were, according to a 2004 study to be of Asian-specific YAP+ lineages (Y-haplogroups D-M55* and D-M125), that were only distributed in the Japanese Archipelago. The Ainu exhibited no other Y-haplogroups (i.e. none of the common East Asian C-M8, O-M175*, and O-M122* haplogroups) and shared no other Y-DNA in common in mainland Japanese and Okinawans. According to a 2005 study, haplogroup D originated in Eurasia OR in sub-Saharan Africa, but reached higher frequency outside of Africa and during the human migration out of Africa, and that its emergence coincided with the spread of domestication and emergence of cities from the Middle East. Relationship to other populations. Ainu museum planned for 2020 to promote understanding of indigenous people.

A national museum dedicated to Ainu culture will open in southwestern Hokkaido in 2020 to coincide with the start of the Tokyo Olympic Games. 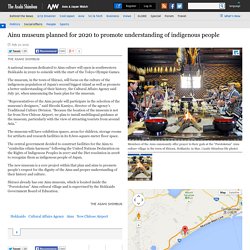