History of a Leader

LeBron James New Nike Commercial - Together (2014) For LeBron James, leadership is everything now. CLEVELAND – The Miami Heat never truly were LeBron James' team, no matter how Dwyane Wade tried to spin it. 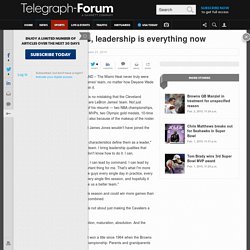 But there is no mistaking that the Cleveland Cavaliers are LeBron James' team. Not just because of his résumé — two NBA championships, two NBA Finals MVPs, four regular-season MVPs, two Olympic gold medals, 10-time All-Star, eight-time all-NBA first team — but also because of the makeup of the roster. Kevin Love, Shawn Marion, Mike Miller and James Jones wouldn't have joined the Cavaliers without James' presence. "I think everyone will lead by however their characteristics define them as a leader," James says. "But I will be the leader of the team. "I can lead by example. The Cavaliers should be so much better this season and could win more games than they won (57) in the two previous seasons combined.

But James' celebrated return to Cleveland is not about just making the Cavaliers a better team. LeBron James: "I will be the leader of the team" INDEPENDENCE, Ohio – This is LeBron James' team. 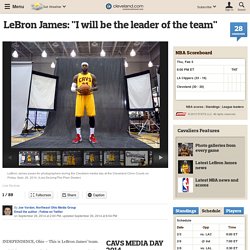 And if there was any doubt, James put it to rest during his press conference at Cavaliers' media day this afternoon. "I will be the leader of the team," James said, back in a Cleveland jersey for the first time in four seasons at the team's practice facility. Practice for the 2014-15 season starts Saturday. "I believe I bring leadership qualities that a lot of guys either don't want or just don't know how to do it," James said. "And I can. James was the star attraction on a team of stars so bright that ESPN's SportsCenter broadcast live from Cleveland Clinic Courts all day. "There's nothing in this league that I haven't seen. For LeBron James, leadership is everything now. Video Keywords Indiana Pacers Cleveland Cavaliers Miami Heat Dion Waiters Tristan Thompson Brazil USA Today Sports' Jeff Zillgitt shares what LeBron James has added to his offensive repertoire and how his leadership is already paying dividends in Cleveland. 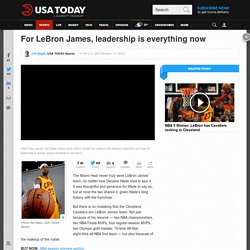 Video Transcript Automatically Generated Transcript (may not be 100% accurate) 00:03 Cleveland Cavaliers superstar LeBron James returned to action on Wednesday 00:07 against the Indiana Pacers. Had delivered one of its typical. The Miami Heat never truly were LeBron James' team, no matter how Dwyane Wade tried to spin it. But there is no mistaking that the Cleveland Cavaliers are LeBron James' team. BUY NOW: NBA season preview section. Andrew Carnegie Leadership.

Andrew Carnegie Leadership Case Study is a part of Leadership Stories, a series of biographies of great leaders in history that have impacted the world in a huge way. 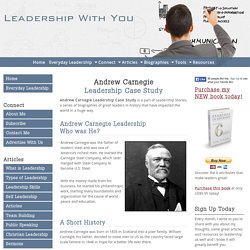 Andrew Carnegie LeadershipWho was He? A Short History Andrew Carnegie was born in 1835 in Scotland into a poor family. William Carnegie, his father, decided to move over to US as the country faced large scale famine in 1848 in hope for a better life over there. Andrew Carnegie started his first job at the young age of 13 changing the spools of thread in a cotton. 2 years later, he went to Ohio Telegraph Company as a telegraph messenger boy. 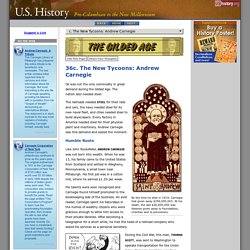 At his death, the last $30,000,000 was likewise given away to foundations, charities and to pensioners. Oil was not the only commodity in great demand during the Gilded Age. The nation also needed steel. The railroads needed steel for their rails and cars, the navy needed steel for its new naval fleet, and cities needed steel to build skyscrapers. Andrew Carnegie - Biography - Philanthropist - Biography.com. Andrew Carnegie, a self-made steel tycoon and one of the wealthiest 19th century U.S. businessmen, donated towards the expansion of the New York Public Library. 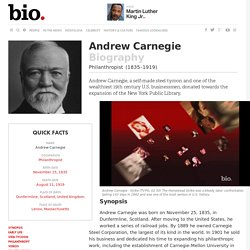 Synopsis Andrew Carnegie was born on November 25, 1835, in Dunfermline, Scotland. After moving to the United States, he worked a series of railroad jobs. By 1889 he owned Carnegie Steel Corporation, the largest of its kind in the world. In 1901 he sold his business and dedicated his time to expanding his philanthropic work, including the establishment of Carnegie-Mellon University in 1904. Early Life. Martin Luther King Jr., Civil Rights Leader.

In 1963 King led protests in the heavily segregated city of Birmingham, Ala., drawing thousands to the southern town to challenge racial division. 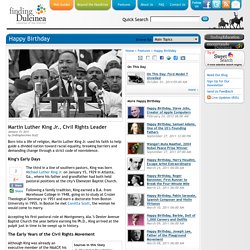 By the time the protest had been halted, hundreds, including King himself, had been arrested, but not before Police Chief Eugene “Bull” Connor had used excessive and violent force against those gathered. From jail, King penned his “Letter from Birmingham Jail,” defending the protest to critics and capturing a message for change, concluding, “injustice anywhere is a threat to justice everywhere.” In 1963, 100 years after the Emancipation Proclamation, Negro American Labor Counsel leader A. Philip Randolph, who in 1941 had planned a march in Washington to protest the exclusion of blacks from national defense jobs, organized a march along with leaders of the most prominent civil rights organizations: Jim Farmer (CORE), Martin Luther King (SCLC), John Lewis (SNCC), Roy Wilkens (NAACP), and Whitney Young (Urban League).

Related:  US History   -  Unit 4   -  Daisy Girl Scout Leader Resources   -  Our Dear Leader makes a Stand   -  Our Dear Leader & Son, now Our Dear Leader   -  How To Be A More Effective Leader   -  Qualities of a Great Leader   -  the servant leader   -  The Art and Science of Leadership   -  When Power Goes To Your Head, It May Shut Out Your Heart   -  20 Things I Learned While I Was in North Korea | Wait But Why   -  Six Emotional Leadership Styles - Leadership Training From MindTools.com   -  6 Things The Most Organized People Do Every Day   -  How to Deal with Chronic Complainers   -  Education   -  Enterprise