Harappan Civilization, Indus valley civilization. More than 500 years from now in the 4th millennium BC, some people from the foothills of baluchistan, started moving into the river valley of Indus and Saraswati. 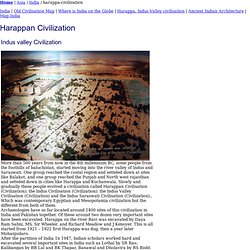 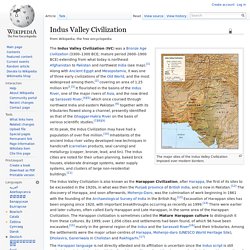 Along with Ancient Egypt and Mesopotamia, it was one of three early civilizations of the Old World, and the most widespread among them, covering an area of 1.25 million km2.[3] It flourished in the basins of the Indus River, one of the major rivers of Asia, and the now dried up Sarasvati River,[4][5] which once coursed through northwest India and eastern Pakistan together with its tributaries flowed along a channel, presently identified as that of the Ghaggar-Hakra River on the basis of various scientific studies.[7][8][9] The Harappan language is not directly attested and its affiliation is uncertain since the Indus script is still undeciphered.

Indus Civilization Introduction. N fact, there seems to have been another large river which ran parallel and west of the Indus in the third and fourth millenium BCE. 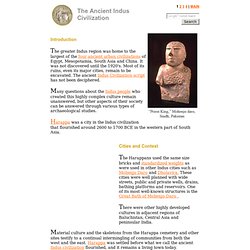 This was the ancient Saraswati-Ghaggar-Hakra River (which some scholars associate with the Saraswati River of the Rg Veda). Its lost banks are slowly being traced by researchers. Along its now dry bed, archaeologists are discovering a whole new set of ancient towns and cities. Meluhha Ancient Mesopotamian texts speak of trading with at least two seafaring civilizations - Magan and Meluhha - in the neighborhood of South Asia in the third millennium B.C. Cities of the Indus Valley. Since the first discovery of this civilization in 1920-21 at Harappa in the Indus Valley, hundreds of sites spread over more than a million square kilometres in the Indian subcontinent have been excavated, many of these are in Northern and Western India. 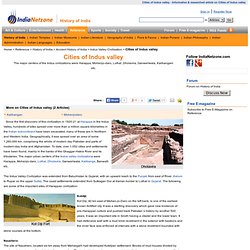 Geographically, it was spread over an area of some 1,260,000 km, comprising the whole of modern day Pakistan and parts of modern-day India and Afghanistan. To date, over 1,052 cities and settlements have been found, mainly in the banks of the Ghaggar-Hakra River and its tributaries. The major urban centers of the Indus valley civilizations were Harappa, Mohenjo-daro, Lothal, Dholavira, Ganweriwala, Kalibanga, Banwalli etc. The Indus Valley Civilization was extended from Baluchistan to Gujarat, with an upward reach to the Punjab from east of River Jhelum to Rupar on the upper Sutlej.

The coast settlements extended from Sutkagan Dor at Iranian border to Lothal in Gujarat. Early Civilization in the Indus Valley. Aryans probably used the Khyber Pass to cross the mountains during their Indian invasion. 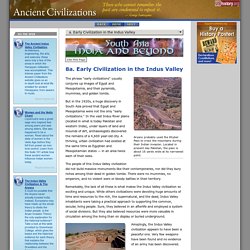 Located in present day Pakistan, the pass is about 16 yards wide at its narrowest point. The phrase "early civilizations" usually conjures up images of Egypt and Mesopotamia, and their pyramids, mummies, and golden tombs. But in the 1920s, a huge discovery in South Asia proved that Egypt and Mesopotamia were not the only "early civilizations. " In the vast Indus River plains (located in what is today Pakistan and western India), under layers of land and mounds of dirt, archaeologists discovered the remains of a 4,600 year-old city. A thriving, urban civilization had existed at the same time as Egyptian and Mesopotamian states — in an area twice each of their sizes. The people of this Indus Valley civilization did not build massive monuments like their contemporaries, nor did they bury riches among their dead in golden tombs. 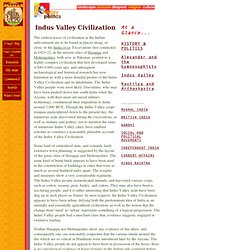 The earliest traces of civilization in the Indian subcontinent are to be found in places along, or close, to the Indus river. Excavations first conducted in 1921-22, in the ancient cities of Harappa and Mohenjodaro, both now in Pakistan, pointed to a highly complex civilization that first developed some 4,500-5,000 years ago, and subsequent archaeological and historical research has now furnished us with a more detailed picture of the Indus Valley Civilization and its inhabitants. The Indus Valley people were most likely Dravidians, who may have been pushed down into south India when the Aryans, with their more advanced military technology, commenced their migrations to India around 2,000 BCE.

The Indus River Valley Civilization: Mohenjo-Daro and Harappa. Indus Valley - How They Managed Their Water Resources. Think of any civilization and it is almost certain that you will find that it thrived along some major river or another. 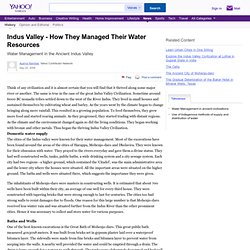 The same is true in the case of the great Indus Valley Civilization. Sometime around 6000 BC nomadic tribes settled down to the west of the River Indus. They lived in small houses and sustained themselves by cultivating wheat and barley. As the years went by the climate began to change bringing along more rainfall. This resulted in a growing population. Mohenjo-daro. Location of Mohenjo-daro within the Pakistani province of Sindh. 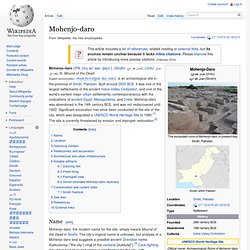 Mohenjo-daro (IPA: [muˑənⁱ dʑoˑ d̪əɽoˑ], (Sindhi: موئن جو دڙو), (Urdu: موئن جودڑو‎), lit. Mound of the Dead; English pronunciation: /moʊˌhɛn.dʒoʊ ˈdɑː.roʊ/), is an archeological site in the province of Sindh, Pakistan. Dholavira. Dholavira (Gujarati: ધોળાવીરા) is an archaeological site in Bhachau Taluka of Kutch District, in the state of Gujarat in western India, which has taken its name from a modern village 1 km (0.62 mi) south of it. 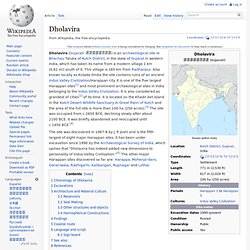 This village is 165 km from Radhanpur. Also known locally as Kotada timba the site contains ruins of an ancient Indus Valley Civilization/Harappan city. It is one of the five largest Harappan sites[1] and most prominent archaeological sites in India belonging to the Indus Valley Civilization. It is also considered as grandest of cities[2] of its time. It is located on the Khadir bet island in the Kutch Desert Wildlife Sanctuary in Great Rann of Kutch and the area of the full site is more than 100 ha (250 acres).[3] The site was occupied from c.2650 BCE, declining slowly after about 2100 BCE. The site was discovered in 1967-8 by J. 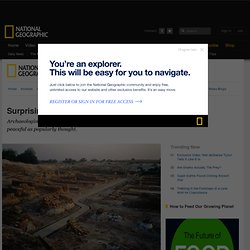 But the people of the sophisticated Indus civilization—which flourished four millennia ago in what is now Pakistan and western India—remain tantalizingly mysterious. Unable to decipher the Indus script, archaeologists have pored over beads, slivers of pottery, and other artifacts for insights into one of the world's first city-building cultures. Now scientists are turning to long-silent witnesses: human bones. In two new studies of skeletons from Indus cemeteries, researchers have found intriguing clues to the makeup of one city's population—and hints that the society there was not as peaceful as it has been portrayed.

Peaceful or not, the Indus civilization accomplished great things. But who was living in those cities? This skull of an adult male shows traces of a broken nose and a blunt-force injury. Photograph courtesy Gwen Robbins Schug Bones from about 1900 to 1700 B.C. Indus Valley.