“We need to think outside the box, and look at hemp”: Farmer. Growing Hemp For Profit. About Hemp Ireland. Born and raised in Galway, Ireland. 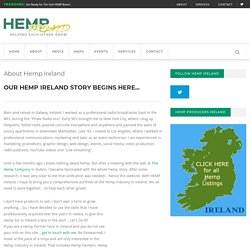 I worked as a professional radio broadcaster back in the 80's, during the "Pirate Radio era". Early 90's brought me to New York City, where I dug up footpaths, felted roofs, poured concrete everywhere and anywhere and painted the walls of luxury apartments in downtown Manhattan. Late '93, I moved to Los Angeles, where I worked in professional communications, marketing and later as an event technician. I am experienced in marketing, promotions, graphic design, web design, events, social media, video production, radio podcasts, YouTube videos and "Live streaming". Until a few months ago, I knew nothing about hemp. I don't have products to sell, I don't own a farm or grow anything... Forgive me, for I have launched this site unfinished. Application Process — Hemp Cooperative Ireland. So you are interested in growing hemp in Ireland but you have no idea how you go about the process. 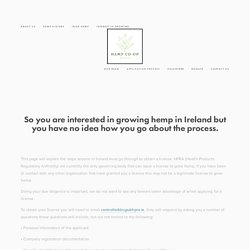 This page will explain the steps anyone in Ireland must go through to obtain a license. HPRA (Health Products Regulatory Authority) are currently the only governing body that can issue a license to grow hemp, if you have been in contact with any other organisation that have granted you a license this may not be a legitimate license to grow hemp. Doing your due diligence is important, we do not want to see any farmers taken advantage of when applying for a license. To obtain your license you will need to email controlleddrugs@hpra.ie, they will respond by asking you a number of questions these questions will include, but are not limited to the following; • Personal information of the applicant • Company registration documentation • Specific identification of the lands for cultivation, including Ordnance Survey Maps • Authorisation for making Confidential Enquiries by the Gardaí • Convictions.

A Guide To Supercritical CO2 Extraction Of Cannabis Oil - Hemp Gazette. How to Make CBD Oil. What is CBD Oil? 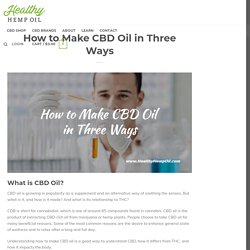 CBD oil is growing in popularity as a supplement and an alternative way of soothing the senses. Grow hemp legally anywhere in Europe! - Hemp Seed Shop. Thanks to “HEMPFLAX” (a company founded in 1994 by Ben Dronkers, founder of Sensi Seeds) it is finally possible to grow hemp 100% legally, whether it is in an effort to reduce your carbon footprint or simply to enjoy the beauty of the plant! 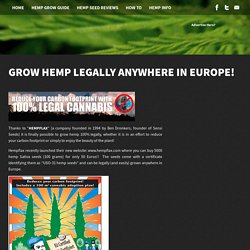 Hempflax recently launched their new website: www.hempflax.com where you can buy 5000 hemp Sativa seeds (100 grams) for only 50 Euros!! The seeds come with a certificate identifying them as “USO-31 hemp seeds” and can be legally (and easily) grown anywhere in Europe. By buying your “USO-31” seeds you will also be adopting a100m2 field in Holland which will be used to grow cannabis. To find out more about this, click here. Below is a copy of the certificate you will receive as proof: Although there has been some publicity in trade publications, yesterday saw the launch of 15 second long TV commercials on Comedy Central in Holland: [youtube= EDIT: Please note that the THC content of USO 31 seeds is less then 0.2 percent, conform to European legislation.

HempFlax - Oplossingen uit de natuur! NORML Ireland - REFORMING CANNABIS LAWS IN IRELAND. The Swiss cannabis farm aiming to supply 'legal weed' across Europe. In fields across Switzerland the harvest time for cannabis is coming to an end, and workers are distributing the crop to shops in France and Switzerland. 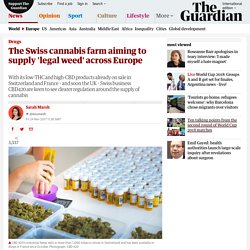 Soon, the plants could be available across much of Europe. The man behind the operation is 31-year-old Jonas Duclos, a former banker, and what he is doing is legal. His business, CBD420, sells BlueDream, a strain of hemp cultivated to ensure the level of tetrahydrocannabinol (THC), the main psychoactive ingredient in cannabis, is low enough (0.2%) to be lawful in most European countries. The UK is one of the exceptions: any trace of THC is outlawed.

Europe's largest CBD producer. Hemp Flowers For CBD Extraction - ihempfarms.com. Home - EIHA European Industrial Hemp Association. Start A Hemp Business – Growing Hemp For Profit. ATTENTION: If you have a industrial hemp business or you are about to start one this may be the most valuable letter you will ever read…” Dear Friend, You probably know that between 2005-2008 hemp food sales increased on average by 47% per year, making hemp one of the fastest-growing natural food categories. 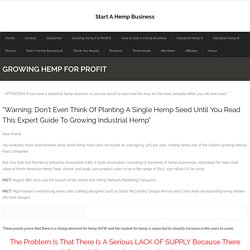 Not only that, but the Hemp Industries Association (HIA), a trade association consisting of hundreds of hemp businesses, estimated the total retail value of North American hemp food, vitamin and body care product sales to be in the range of $113 -129 million US for 2009. FACT: August 28th 2010 saw the launch of the worlds first Hemp Network Marketing Company! CBD Oils and Hemp Oils - Legal Status. Hemp production and uses in Ireland. Hemp (Cannabis sativa L.) production and uses in Ireland J. 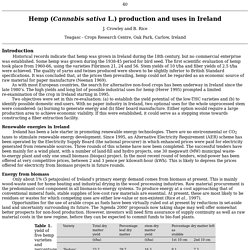 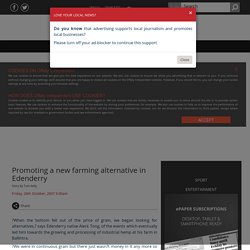 When the bottom fell out of the price of grain, we began looking for alternatives,? Says Edenderry native Aleck Tong, of the events which eventually led him towards the growing and processing of industrial hemp at his farm in Ballintra. ? Hemp and medical cannabis could be a boost for farmers – Cannabis Ireland. Everything HEMP in Ireland. Hemp Cooperative Ireland. Medicinal Cannabis plant to open in Donegal next year - Donegal News.

A MEDICINAL cannabis research plant is reported to be on its way to Donegal early next year, along with the creation of over 50 jobs. 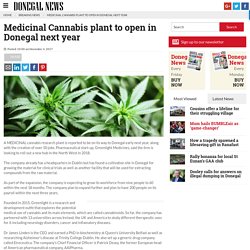 Pharmaceutical start-up, Greenlight Medicines, said the firm is looking to roll out a new hub in the North West in 2018. The company already has a headquarters in Dublin but has found a cultivation site in Donegal for growing the material for clinical trials as well as another facility that will be used for extracting compounds from the raw material. As part of the expansion, the company is expecting to grow its workforce from nine people to 60 within the next 18 months. The company plan to expand further and plan to have 200 people on its payroll within the next three years. Founded in 2015, Greenlight is a research and development outfit that explores the potential medical use of cannabis and its main elements, which are called cannabinoids. The Hempture Team @ Wicklows largest HEMP farm – Hempture.ie OFFICIAL SITE.

26th September 2015 – The sun was shining as The Hempture Team took final pre-harvest samples from one of Ireland’s largest HEMP cultivations in Wicklow. 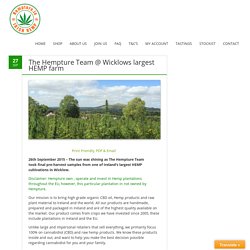 Disclaimer: Hempture own , operate and invest in Hemp plantations throughout the EU, however, this particular plantation in not owned by Hempture. Our mission is to bring high grade organic CBD oil, Hemp products and raw plant material to Ireland and the world. All our products are handmade, prepared and packaged in Ireland and are of the highest quality available on the market. Our product comes from crops we have invested since 2005, these include plantations in Ireland and the EU. Unlike large and impersonal retailers that sell everything, we primarily focus 100% on cannabidiol (CBD) and raw hemp products.

We have been supplying our CBD products in small batches with love for nearly 20 years before we decided to make them available to the public. Take a look at some photos below: Huge 'cannabis farms' could be established in these 4 Irish counties. 5788 ProducingBiomassFromHemp. Hemp for MDF production. Oliver Moore: Hemp thrives in coastal north Kerry.