China pledges to boost healthcare in Africa. Africa: China Out to Tackle Malaria. Photo: The New Times A mother and her child sleep under a mosquito net. 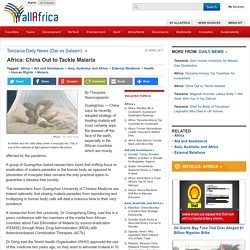 This is one of the methods to fight against malaria (file photo). By Theopista Nsanzugwanko Guangzhou — China says its recently adopted strategy of treating malaria will most certainly wipe the disease off the face of the earth, especially in the African countries which are mostly affected by the pandemic. A group of Guangzhou based researchers insist that shifting focus to eradication of malaria parasites in the human body as opposed to prevention of mosquito bites remains the only practical option to guarantee a disease free society. The researchers from Guangzhou University of Chinese Medicine are indeed optimistic that stoping malaria parasites from reproducing and multiplying in human body cells will deal a massive blow to their very existence. Dr Deng said the World Health Organisation (WHO) approved the use of this medicine two years ago, so they want to eliminate malaria in 10 years. 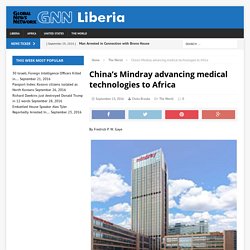 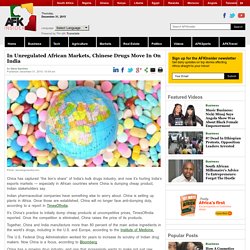 Indian pharmaceutical companies have something else to worry about. China is setting up plants in Africa. Once those are established, China will no longer face anti-dumping duty, according to a report in TimesOfIndia. It’s China’s practice to initially dump cheap products at uncompetitive prices, TimesOfIndia reported. Together, China and India manufacture more than 80 percent of the main active ingredients in the world’s drugs, including in the U.S. and Europe, according to the Institute of Medicine. The U.S. China has a growing drug industry, and one that increasingly wants to make not just raw ingredients but finished drugs for export. Chinese company producing medicine in Mali. Talk Africa: China and Africa's Health.

China to scale up medical aid and support in African countries. China promises to build 100 hospitals, clinics in Africa - Footprint to Africa. The Chinese government has promised to build 100 hospitals and clinics across Africa in the next three years as part of a plan to improve health systems and preparations for containing future disease outbreaks on the continent. 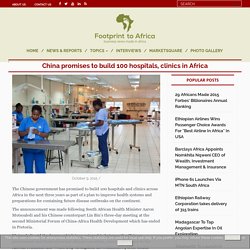 The announcement was made following South African Health Minister Aaron Motsoaledi and his Chinese counterpart Lin Bin’s three-day meeting at the second Ministerial Forum of China-Africa Health Development which has ended in Pretoria. Motsoaledi said the forum, which is a partnership between the Chinese government and those of several African countries, was a major boost to the African continent and would help strengthen the continent’s public health systems during the post-Ebola era. “Learning from the EVD [Ebola Virus Disease] crisis, Chinese and African leaders in the health sectors fully support a new, well-funded, and functional international response system to manage future pandemics,” the South African minister said. 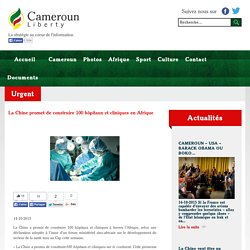 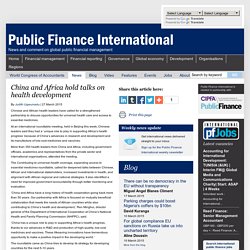 At an international roundtable meeting, held in Beijing this week, Chinese leaders said they had a ‘unique role to play in supporting Africa’s health progress’ because of China’s advances in research and development and its manufacture of low-cost medicines and vaccines. More than 350 health leaders from China and Africa, including government officials, academics and representatives from the private sector and international organisations, attended the meeting. 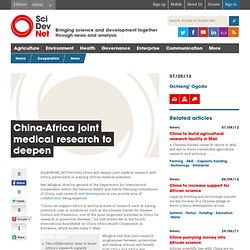 Ren Minghui, director-general of the Department for International Cooperation within the National Health and Family Planning Commission of China, said research and development is one priority area of collaboration being explored. "China can support Africa in technical areas of research such as having scientists train in institutions such as the Chinese Center for Disease Control and Prevention, one of the most important institutes in China for research in preventive diseases," he told SciDev.Net at the Fourth International Roundtable on China-Africa Health Cooperation in Botswana, which ended today (7 May). The collaboration aims to boost Africa's research capacityChinese drugs firms are being urged to transfer technologyThe initiative is not driven by commercial interest, says Chinese official "Data are important for decision-making and for knowing where we are.