What Happens If Trump Repeals Obamacare? Donald Trump Says He May Keep Parts of Obama Health Care Act. The new plans drop all mention of reining in high drug prices, which Mr. 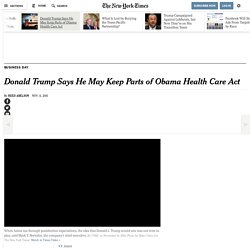 Trump had advocated for months, and add new language about modernizing Medicare, a potential nod to congressional efforts to give people vouchers toward buying private health insurance. “Health care is shaping up as a priority for the Trump administration and Republicans in Congress,” said Larry Levitt, an executive at the Kaiser Family Foundation, which closely tracks health policy. “But we still have very little detail about what that really means.” The health care industry, which invested hundreds of millions of dollars in preparing for business under the Affordable Care Act, is disoriented about what to do next — and scrambling for ways to avoid a financial shock. A repeal of the act would mean the loss of millions of customers for insurance companies and uninsured people turning to hospital emergency rooms for basic care.

Mr. Donald J Trump for President. Since March of 2010, the American people have had to suffer under the incredible economic burden of the Affordable Care Act—Obamacare. 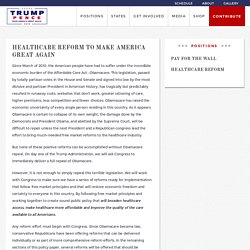 This legislation, passed by totally partisan votes in the House and Senate and signed into law by the most divisive and partisan President in American history, has tragically but predictably resulted in runaway costs, websites that don’t work, greater rationing of care, higher premiums, less competition and fewer choices. Obamacare has raised the economic uncertainty of every single person residing in this country. As it appears Obamacare is certain to collapse of its own weight, the damage done by the Democrats and President Obama, and abetted by the Supreme Court, will be difficult to repair unless the next President and a Republican congress lead the effort to bring much-needed free market reforms to the healthcare industry.

But none of these positive reforms can be accomplished without Obamacare repeal. Any reform effort must begin with Congress. Donald Trump elected: His 7 point plan for healthcare. President-elect Donald Trump campaigned on promises to shake up Washington, with radical ideas on immigration and trade - but that is only the beginning. 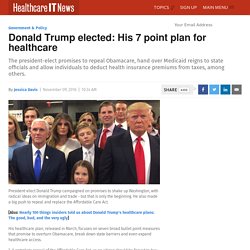 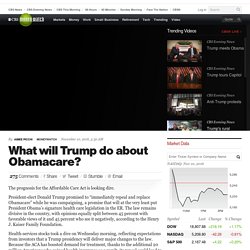 President-elect Donald Trump promised to “immediately repeal and replace Obamacare” while he was campaigning, a promise that will at the very least put President Obama’s signature health care legislation in the ER. The law remains divisive in the country, with opinions equally split between 45 percent with favorable views of it and 45 percent who see it negatively, according to the Henry J. Kaiser Family Foundation. Health-services stocks took a dive on Wednesday morning, reflecting expectations from investors that a Trump presidency will deliver major changes to the law. Because the ACA has boosted demand for treatment, thanks to the additional 20 million Americans who gained health insurance as a result, its repeal could lead to sharply lower demand for health care and pharmaceutical services. Trump's Health Plan: Pay Your Own Medical Bills.

Five disgruntled Republican physicians and one nurse warmed up the conference room at a Hilton DoubleTree hotel in Pennsylvania yesterday. 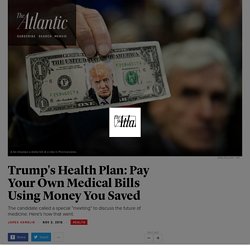 All were members of the U.S. Congress, gathered for a rally that Donald Trump would call “a meeting talking about health care.” California Faces Major Reversal If Trump, Congress Scrap Health Law. The 2016 Election Reveals The Differences On Health Care Are Deeper Than Ever. We are nearing the grand finale of our long and disheartening election opera, one we dare not ignore because the outcomes matter so much. 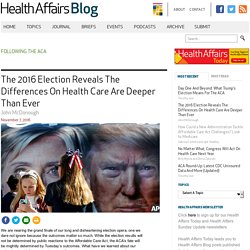 While the election results will not be determined by public reactions to the Affordable Care Act, the ACA’s fate will be mightily determined by Tuesday’s outcomes. What have we learned about our collective health future over the past 18 months and what might this mean for our health system’s future? Public opinion on health reform is as frozen today as it was in spring, 2015 Kaiser monthly tracking polls show reliably unfavorable attitudes toward the ACA, slightly beating favorables, and stuck since 2014 in 40 percent purgatory.

What Lies Ahead For Obamacare In The Trump Administration. President-elect Donald Trump has consistently promised to repeal Obamacare. 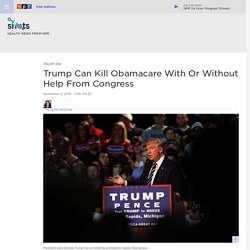 Jeff Kowalsky/AFP/Getty Images hide caption toggle caption Jeff Kowalsky/AFP/Getty Images President-elect Donald Trump has consistently promised to repeal Obamacare. President-elect Donald Trump has promised over and over in recent months that he will repeal and replace the Affordable Care Act, also called Obamacare, when he reaches the White House. "Obamacare is a disaster. Now that Trump will move into the Oval Office in January, the question is whether he'll be able to completely repeal the six-year-old law that has had an impact on every aspect of the U.S. health care system. "It's a challenge for a Trump presidency," says Jack Hoadley, a research professor at Georgetown University's Health Policy Institute.