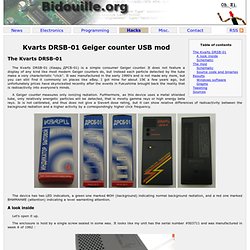 It does not feature a display of any kind like most modern Geiger counters do, but instead each particle detected by the tube make a very characteristic "click". It was manufactured in the early 1990's and is not made any more, but you can still find it commonly on places like eBay. I got mine for about 15€ a few years ago, but unfortunately prices have skyrocketed recently after the events in Fukushima brought back the reality that is radioactivity into everyone's minds. A Geiger counter measures only ionizing radiation. The device has two LED indicators, a green one marked ФОН (background) indicating normal background radiation, and a red one marked ВНИМАНИЕ (attention) indicating a level warranting attention.

A look inside Let's open it up. About Air Ions. Sky Zone Tabletop Mist Fountain. Add a mist fountain to any room for decoration, and reap the benefits of owning the best looking humidifier, air purifier and aroma diffuser available. 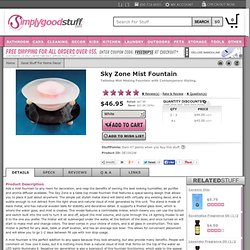 The Sky Zone is a table top model fountain that features a space-saving design that allows you to place it just about anywhere. The simple yet stylish metal stand will blend with virtually any existing decor, and is subtle enough to not detract from the light show and natural cloud of mist generated by this unit. The stand is made of black metal, and has natural wooden balls for stability and decorative detail. It supports a frosted glass bowl, which is where the water goes, and mist is created. This model features a controllable mister, which means you can use the button and switch built into the cord to turn it on and off, adjust the mist volume, and cycle through the 16 lighting modes to set it to the one you prefer. A mist fountain is the perfect addition to any space because they look amazing, but also provide many benefits.

Mozilla Firefox. Negative ion exists in the forest, periphery of waterfall, grassland and seashore in plenty. 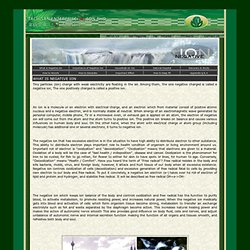 Human being feels refreshed and relaxed touching o the nature. We often feel refreshed in the forest or hot spring, at the periphery of waterfall and after the thunder.Soil on the earth, stream of water rain, and electric discharge phenomenon such as thunder are the source of negative ion provides well balanced ion into the body. The water splash separated minutely in the air such as in the waterfall become positively charge (+) and surrounding air become negatively charged (-) by air ionizing phenomenon.

When molecule group of steam is mechanically separated by strong wind, or by the outside energy such as discharge by thunder, sunbeam, heat, radiation (cosmic rays, radiation from the earth's surface), the air with negative ion is generated as in the waterfall. There are places on the earth that have large oxygen molecule and small oxygen molecule. How to Absorb Negative Ions. Ultrasonic Water Fogger-The Mist Maker. Indoor Fountains - Add Beauty and Health Improving. DIY Geiger Counter (with build plans) SALE! Sensitive Geiger Counter Kit-The Electronic Goldmine.

Cell phone RF radiation detector. Toy Ion Chamber Radiation Detector. EXTREMELY SIMPLE DIY GEIGER COUNTER - Built it dirt cheap (nearly all vendors are sold out and back ordered for months) Face it, buying a Geiger Counter right now and you will have to wait for months....or pay out your life savings to buy one on Ebay IF they are available. 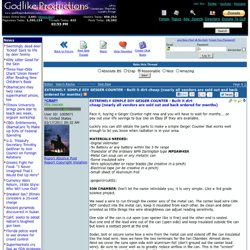 Luckily you can still obtain the parts to make a simple Geiger Counter that works well enough to let you know when radiation is in your area. -Digital Voltmeter -9v Battery -Transistor -Metal Can -Some insulated wire -Small sheet of Aluminum Foil :geigercircuit01: Don't let the name intimidate you, it is very simple. DIY radiation / ion detector. Air Ion Counter. Manufactured in the USA by AlphaLab, Inc. 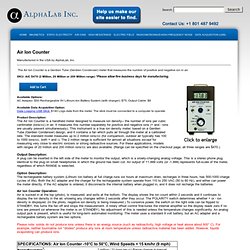 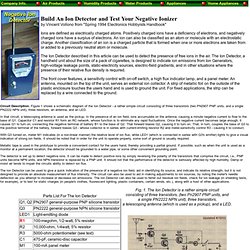 Figure 1 shows a schematic diagram of the Ion Detector - a rather simple circuit consisting of three transistors (two PN2907 PNP units, and a single PN2222 NPN unit), three resistors, an antenna, and an LED. In that circuit, a telescoping antenna is used as the pickup. In the presence of an ion field, ions accumulate on the antenna, causing a minute negative current to flow to the base of Q1. Capacitor C1 and resistor R1 form an RC network, whose function is to eliminate any rapid fluctuations. With Q3 turned on, meter M1 indicates (in a non-linear manner) the relative level of ion flux, while LED1 (which is connected in series with Q3's emitter) lights to give a visual indication of strong ion fields.