Motherboard TV: Free The Network. Eyeo2012 - Julian Oliver. WikiLeaks and Anonymous respond to status quo journalism - Opinion. The work of an intellectual is not to mould the political will of others; it is, through the analyses that he does in his own field, to re-examine evidence and assumptions, to shake up habitual ways of working and thinking, to dissipate conventional familiarities, to re-evaluate rules and institutions and to participate in the formation of a political will (where he has his role as citizen to play) 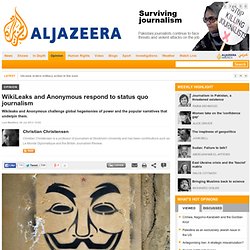 . - Michel Foucault, "The Concern for Truth" The real political task in a society such as ours is to criticise the workings of institutions that appear to be both neutral and independent, to criticise and attack them in such a manner that the political violence that has always exercised itself obscurely through them will be unmasked, so that one can fight against them.

. - Michel Foucault, " Human Nature: Justice Versus Power " So, what does this have to do with journalism? Q: Is WikiLeaks a member of the networked Fourth Estate? A (Benkler): Absolutely. Q: Why do you believe that? ZXX. Hacktivists as Gadflies. The Real War on Reality. The Stone is a forum for contemporary philosophers and other thinkers on issues both timely and timeless. 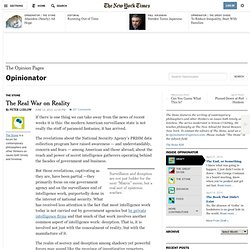 If there is one thing we can take away from the news of recent weeks it is this: the modern American surveillance state is not really the stuff of paranoid fantasies; it has arrived. The revelations about the National Security Agency’s PRISM data collection program have raised awareness — and understandably, concern and fears — among American and those abroad, about the reach and power of secret intelligence gatherers operating behind the facades of government and business.

Surveillance and deception are not just fodder for the next “Matrix” movie, but a real sort of epistemic warfare. But those revelations, captivating as they are, have been partial —they primarily focus on one government agency and on the surveillance end of intelligence work, purportedly done in the interest of national security. 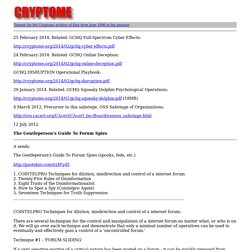 There are several techniques for the control and manipulation of a internet forum no matter what, or who is on it. New speech-jamming gun hints at dystopian Big Brother future. Japanese researchers have created a hand-held gun (pictured above) that can jam the words of speakers who are more than 30 meters (100ft) away. 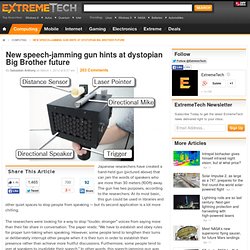 The gun has two purposes, according to the researchers: At its most basic, this gun could be used in libraries and other quiet spaces to stop people from speaking — but its second application is a lot more chilling. The researchers were looking for a way to stop “louder, stronger” voices from saying more than their fair share in conversation. The paper reads: “We have to establish and obey rules for proper turn-taking when speaking. However, some people tend to lengthen their turns or deliberately interrupt other people when it is their turn in order to establish their presence rather than achieve more fruitful discussions. Furthermore, some people tend to jeer at speakers to invalidate their speech.” Suffice it to say, if you’re a firm believer in free speech, you should now be experiencing a deafening cacophony of alarm bells. "The Transparency Grenade" Megaupload Dirty Diaries Fucked Hacktivism using SOPA, PIPA, NDAA to gain Fools Sympathies Thievn'

28C3: Does Hacktivism Matter? (en) Bruce Sterling on Hacktivism Video. Professor Zittrain Q&A Hacktivism: Anonymous, lulzsec, and Cybercrime in 2012 and Beyond. Whaling: campaigners use drones in the fight against Japanese whalers. The drone is launched from the deck of the Steve Irwin. 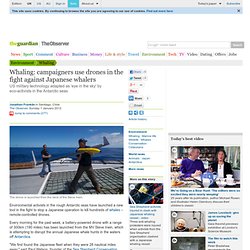 Environmental activists in the rough Antarctic seas have launched a new tool in the fight to stop a Japanese operation to kill hundreds of whales – remote-controlled drones. Every morning for the past week, a battery-powered drone with a range of 300km (190 miles) has been launched from the MV Steve Irwin, which is attempting to disrupt the annual Japanese whale hunts in the waters off Antarctica. "We first found the Japanese fleet when they were 28 nautical miles away," said Paul Watson, founder of the Sea Shepherd Conservation Society, an international marine wildlife protection group based in the United States. 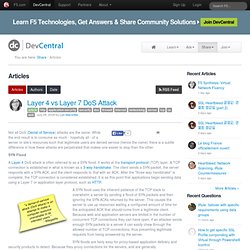 While the end result is to consume as much - hopefully all - of a server or site's resources such that legitimate users are denied service (hence the name) there is a subtle difference in how these attacks are perpetrated that makes one easier to stop than the other. SYN Flood. Wikiscanner.