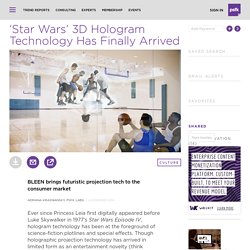 Though holographic projection technology has arrived in limited form as an entertainment novelty (think Coachella’s Tupac hologram), it has not yet entered the everyday consumer market. Or so you may believe, until you meet the BLEEN Projection System. Bleen is a projection device that uses large-scale 3D reconstruction to create a moving holographic image.

Projected images are over eight feet in height and do not require any screens, lenses, or glasses for viewing. Bleen technology relies on fast-pulsed laser beams and optical focusing systems to coordinate light color, intensity, and distribution. Elegant woman in a room full of fashion accessories Bleen systems are expected to ship in late 2015. ‘Star Wars’ 3D Hologram Technology Has Finally Arrived. Singapore: How Slum Became Asia's Sustainable City State. One of the key questions of our time is how to ensure the sustainability of tomorrow’s cities in times of rapid urban growth. 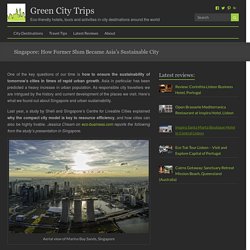 Asia in particular has been predicted a heavy increase in urban population. As responsible city travellers we are intrigued by the history and current development of the places we visit. Here’s what we found out about Singapore and urban sustainability. Last year, a study by Shell and Singapore’s Centre for Liveable Cities explained why the compact city model is key to resource efficiency, and how cities can also be highly livable. Jessica Cheam on eco-business.com reports the following from the study’s presentation in Singapore.

Massive Urban Population Growth in India, China, Nigeria, West Africa, US The global urban population is expected to rise from 3.6 billion in 2010 to 6.3 billion by 2050, and the top five locations for this urban population explosion are India, China, Nigeria, West Africa and the United States. Study: Make Cities Compact, Avoid Sprawl. Transparency. We believe transparency is the first step to transform the industry. 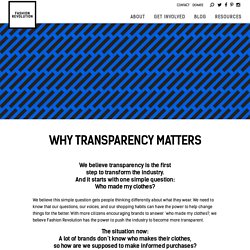 , we believe Fashion Revolution has the power to push the industry to become more transparent. The situation now: A lot of brands don’t know who makes their clothes, so how are we supposed to make informed purchases? The latest Behind the Barcode report found that out of 87 of the biggest fashion brands less than half publicly state which countries they source from, only 16% publish a full list of the factories where their clothes are sewn, and less than a fifth of brands know where all of their zippers, buttons, thread and fabric come from.1 Lack of transparency costs lives. Tackling the Food Waste Crisis. Materials. Denimite Denimite is a solid, marbled material derived from recycled worn-out denim, from both post-consumer and post-industrial waste. 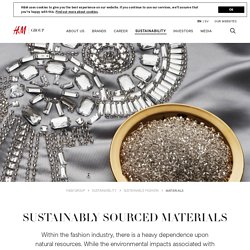 The jeans are shredded, mixed with resin, heated up and pressed - ultimately becoming a very hard and durable material that resembles gemstones. That is why it is perfect to use in accessories. We were the first fashion company to use the material in a collection; in the H&M 2016 Conscious Exclusive collection it was used for deco-inspired clip-on earrings. Organic hemp Hemp is a fairly new material for us, but it has been used to make textiles for thousands of years.

Organic silk Conventional silk comes from silk worms living in mulberry trees. FSC™ natural rubber The Forest Stewardship Council™ (FSC) is a global, independent, non-profit organisation, which protects and supports millions of acres of forest around the world. Black cabs must face up to reality - it's all Uber now. The new value economy. "Upcycling" — Turning Trash Into Products To Create Zero Waste.

PARIS — Can we one day live in a world where there’s zero trash? 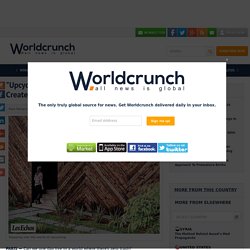 A German chemist named Michael Braungart believes it is possible. He encourages companies to put a complete end to waste in The Upcycle: Beyond Sustainability — Designing for Abundance, a book he co-wrote with U.S. architect and designer William McDonough. “The trash can means failure,” says Braungart. "We need to design not to waste.” In order to reach this goal, Braungart believes a worldwide bank of raw materials needs to be created. Braungart is trying to convince an audience beyond intellectuals and environmentalists the value of his argument. "This is what I call ‘upcycle,’ the capability to anticipate the lifecycle of all the components of a product so as to organize their recovery and reuse before they're discarded,” says Braungart. But less than 300 companies made the manufacturing changes that a circular economy needs, namely turning the content of our trash bags into a deposit of raw materials.

'Upcycling' art & crafts store helps turn trash into treasure. CLEVELAND - Some of it came from someone's attic, while other materials may be leftover from a local factory. 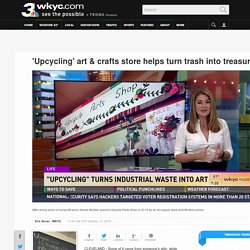 If Nicole McGee gets her wish, it will all be repurposed into artwork and useful everyday products. "Upcycling is about looking at things differently," says McGee. "It's also about diverting waste materials. It's sustainability, as well as creativity, as well as community coming together. " Mc Gee's Upcyle Part Shop carries everything from colored pencils and paint to skeleton keys and old industrial sampling tills -- all ready to be re-imagined into something else. "If you see beauty and potential in a plastic bottle, then where can we find value around us. in our homes, in our neighborhoods, among our neighbors, in our communities? " RELATED | Fresh Water Cleveland: Upcycle Parts Shop engages the community though creative reuse After doing years of nonprofit work, she opened the shop in 2014 as an art supply store at thrift store prices.