Uber 'willing to change' as drivers get minimum wage, holiday pay and pensions. Uber drivers entitled to workers' rights, UK supreme court rules. The UK supreme court has dismissed Uber’s appeal against a landmark employment tribunal ruling that its drivers should be classed as workers with access to the minimum wage and paid holidays. 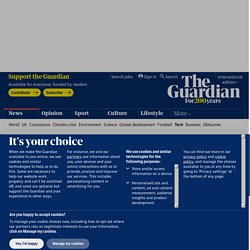 Six justices handed down a unanimous decision backing the October 2016 employment tribunal ruling that could land Uber with a big compensation pay out and lead to better terms for millions of workers in the gig economy. Uber, like many delivery and courier companies, has argued that its drivers are independent self-employed “partners” not entitled to basic rights enjoyed by workers, which include the legally enforceable minimum hourly wage and a workplace pension. But the supreme court said any attempt by organisations to draft artificial contracts intended to side-step basic employment protections were void and unenforceable. It ruled that Uber must consider drivers as workers from the time they log on to the app, until they log off.

Uber will not be able to launch further appeals against the ruling. Uber drivers are workers not self employed, Supreme Court rules. Uber and Lyft must classify drivers as employees, judge rules, in blow to gig economy. A California judge has issued a preliminary injunction that would block Uber and Lyft from classifying their drivers as independent contractors rather than employees. 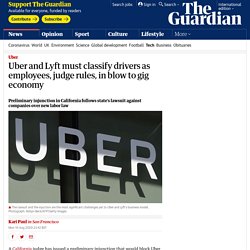 The move on Monday came in response to a May lawsuit filed by the state of California against the companies, which alleged they are misclassifying their drivers under the state’s new labor law. That law, known as AB5, took effect on 1 January. The strictest of its kind in the US, it makes it more difficult for companies to classify workers as independent contractors instead of employees who are entitled to minimum wage and benefits. The lack of workers’ compensation and unemployment benefits for drivers has become increasingly urgent during the coronavirus pandemic, as ridership plunges and workers struggle to protect themselves. The rise and rise of the gig economy. The Brainstorm long read: how did part-time work, zero-hours contracts and independent contracting become the norm? 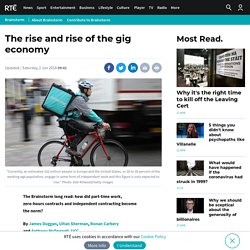 By James Duggan, Ultan Sherman, Ronan Carbery and Anthony McDonnell, UCC The emergence and continuing rise of the gig economy has been phenomenal. One of the most widely debated trends in the world of work, this system features online platforms that match the supply and demand of work in a range of areas, on a short-term and payment-by-task basis. Although offering varied services, organisations in the gig economy share a new, seemingly alternative means of conducting business exclusively via digital platforms (usually smartphone apps) to share and capitalise on skills and resources in local markets.

Recent years have seen several businesses grow under this umbrella across diverse sectors and offering a wide variety of services. Dublin’s Gig Economy is Booming. Its Workers Aren’t – The University Times. I’m standing directly outside the National Lottery headquarters on Lower Abbey St, on a freezing cold October night in Dublin’s city centre. 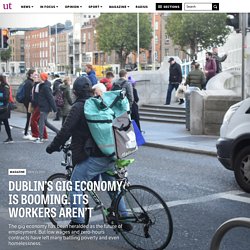 Underneath the blithe, starry logo protruding from the front of its shut offices lies a homeless man wrapped up in a worn sleeping bag. This tragic irony is not lost on the Dublin Inner City Helping Homeless (ICHH) volunteer team I’m on an outreach run with. They swiftly make up a small food bag for the man, who is sound asleep, and we continue on our rounds. In truth, the entire night I spend volunteering with the team is full of contradictions of this sort. It begins with the observation, made en route to meet the rest of the outreach team, that the ICHH is situated virtually adjacent to the International Finance Services Centre – the Haughey brainchild of global renown, and perhaps the most egregious symbol of Ireland’s status as a tax haven.

Working homeless people trundle through a Dublin dressed up with boutiques, cranes and modern buildings. Sunday Business Post The Gig is Up 110218 EMPLOYMENT (Emmet Whelan) The gig economy: anathema to integral human development? In June I presented a keynote on privacy and regulation in Germany at the annual meeting of the Societas Ethica, the European Society for Research in Ethics. 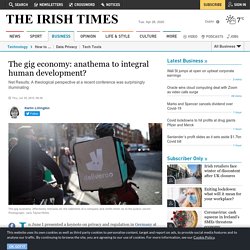 It was founded in 1964 by a Swiss theologian and maintains its theological grounding, though such a perspective is neither required nor expected from members, who come from many areas of study and interest. Speakers also represented many diverse backgrounds. The theme for the event was Digital Humanity: Ethical Analysis and Responses in the Age of Transformation, discussed over four days at the beautiful 17th-century Evangelische Akademie in Tutzing, in the Bavarian lakeland area south of Munich.