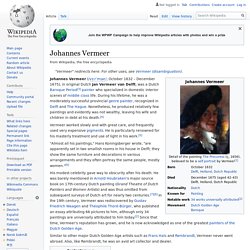 During his lifetime, he was a moderately successful provincial genre painter, recognized in Delft and The Hague. Nonetheless, he produced relatively few paintings and evidently was not wealthy, leaving his wife and children in debt at his death.[4] Vermeer worked slowly and with great care, and frequently used very expensive pigments. He is particularly renowned for his masterly treatment and use of light in his work.[5] "Almost all his paintings," Hans Koningsberger wrote, "are apparently set in two smallish rooms in his house in Delft; they show the same furniture and decorations in various arrangements and they often portray the same people, mostly women His modest celebrity gave way to obscurity after his death. Pronunciation of name[edit] Life[edit] Career[edit] ^ W. Search. Victorian era. Period of British history encompassing Queen Victoria's reign Ideologically, the Victorian era witnessed resistance to the rationalism that defined the Georgian period and an increasing turn towards romanticism and even mysticism with regard to religion, social values, and arts.[2] Terminology and periodisation In the strictest sense, the Victorian era covers the duration of Victoria's reign as Queen of the United Kingdom of Great Britain and Ireland, from her accession on 20 June 1837—after the death of her uncle, William IV—until her death on 22 January 1901, after which she was succeeded by her eldest son, Edward VII. 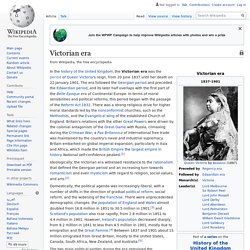 Her reign lasted for 63 years and seven months, a longer period than any of her predecessors. Political and diplomatic history Early In 1832, after much political agitation, the Reform Act was passed on the third attempt. Middle. Claude Monet: 10 works. Jane Eyre. 1847 novel by Charlotte Brontë The novel revolutionised prose fiction by being the first to focus on its protagonist's moral and spiritual development through an intimate first-person narrative, where actions and events are coloured by a psychological intensity. 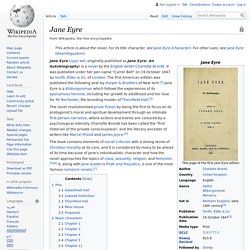 Charlotte Brontë has been called the "first historian of the private consciousness", and the literary ancestor of writers like Proust and Joyce.[3] The book contains elements of social criticism with a strong sense of Christian morality at its core, and it is considered by many to be ahead of its time because of Jane's individualistic character and how the novel approaches the topics of class, sexuality, religion, and feminism.[4][5] It, along with Jane Austen's Pride and Prejudice, is one of the most famous romance novels of all time.[6] Plot[edit] Jane Eyre is divided into 38 chapters. The second edition was dedicated to William Makepeace Thackeray. Gateshead Hall[edit] Young Jane argues with her guardian Mrs. 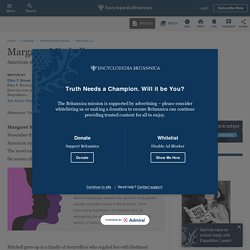 —died August 16, 1949, Atlanta), American author of the enormously popular novel Gone With the Wind (1936). The novel earned Mitchell a National Book Award and a Pulitzer Prize, and it was the source of the classic film of the same name released in 1939. Mitchell grew up in a family of storytellers who regaled her with firsthand accounts of their experiences during the American Civil War, which had ended just 35 years before her birth. An active tomboy, she played in the earthen fortifications that still surrounded her hometown of Atlanta and often went horseback riding with Confederate veterans. She also was a voracious reader and wrote numerous stories and plays throughout her youth. Mitchell graduated from Atlanta’s Washington Seminary in 1918 and enrolled at Smith College in Massachusetts. Get exclusive access to content from our 1768 First Edition with your subscription.

Appearances Can Be Deceiving: The Dresses of Frida Kahlo – W86th. In April 2004, some fifty years after Frida Kahlo’s death, the curator of her house museum in Coyoacán gained access to a number of rooms in the attic and private quarters that had been reserved for the artist’s surviving housekeeper. 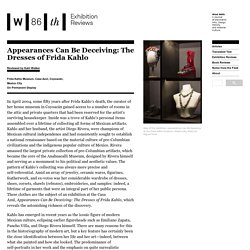 Inside was a trove of Kahlo’s personal items assembled over a lifetime of collecting all forms of Mexican artifacts. Kahlo and her husband, the artist Diego Rivera, were champions of Mexican cultural independence and had consistently sought to establish a national renaissance based on the material culture of pre-Columbian civilizations and the indigenous popular culture of Mexico. Frida Kahlo: Appearances Can Be Deceiving – Riot Material. At the Brooklyn Museum (through May 12) Reviewed by Ellen C. 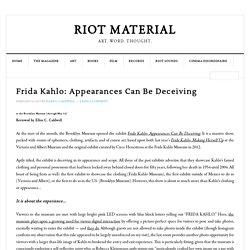 Caldwell At the start of the month, the Brooklyn Museum opened the exhibit Frida Kahlo: Appearances Can Be Deceiving. Frida Kahlo: 8 works.