Where Did You Wear It. Arduino and Microcontrollers Daily. Geocaching - The Official Global GPS Cache Hunt Site. Google. Geo-Location Game “Urban Defender” using Arduino. By using an Arduino, GPS, and an accelerometer, this group put together the “Urban Defender” – A hyper-local geolocation based game which allows users to “claim” various districts of a city by throwing the ball against a wall to claim the territory.Â The ball tells you whether you’re in friendly or enemy territory through it’s built in speakers and LEDs. 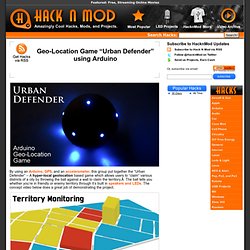 The concept video below does a great job of demonstrating the project. The map above is how the users can track which geo-locations are owned by different groups.Â It’s just a concept for now, but it would make for a great iPhone app to use to monitor which territories are owned by each team. The Concept: The superb concept video above demonstrates the goal of the game, mapping out your “territory” by claiming and taking over blocks of a city.Â Awesome stuff!

Sightsmap. Check In on Facebook, Foursquare, and Twitter with locc.us. Encounter (game) Project logo Encounter is an international network of active urban games. 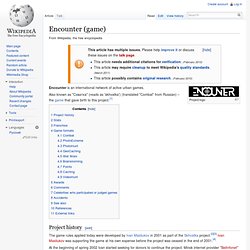