Tunnels of Love. Recently the show was much praised at the Centre for Contemporary Arts in Glasgow as part of Glasgay! 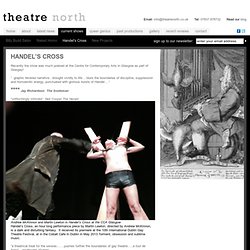 Www.vimeo.com/71011132. Sussex History - Brighton Sewers Tour. On Saturday 9th June 20 members of Subterranea Britannica headed down to Brighton for a gentle stroll round the town sewers.

During the summer months, Southern Water, who own the network of Victorian sewers running under the town, take visitors a short distance into the Brighton underworld. The entrance to the sewers is through pier arch 260 beneath the Palace Pier. As soon as the door opened the smell of raw sewage hit us and stayed with us through out the trip. "Your nose soon get anaesthetised to it" our guide told us; my nose certainly didn't. Having donned hard hats a tally and gloves to protect our hands from rats which have been known to scurry along the hand rails, we were also warned about open cuts coming into contact with rats urine which can lead to Weil's disease. Having seen the video we split into two parties as the first section involves some narrow passages and small rooms.

We retraced our steps and descended another flight of stairs into the parallel overflow sewer. Underthepavilion. Mary - Character sheet. The Argus headlines (Brighton & Hove) Pool. Brighton History. Brighton began as a Saxon village. 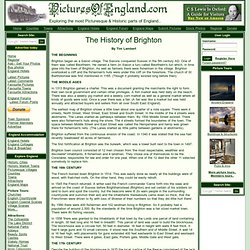 The Saxons conquered Sussex in the 5th century AD. One of them was called Beorthelm. He owned a farm (in Saxon a tun) called Beorthelm's tun which, in time grew into the town of Brighton. As well as farmers there were fishermen in the village. The History of Brighton's West Pier. 1896 a landing stage of mild steel was constructed to cater for steamer excursions. 1901 the landing stage was enlarged. 1903 the pavilion was converted into a theatre with seating for 1000 people. 1914 - 16 the covered bandstand was demolished, the pier widened and a low eight sided oval concert hall seating 1400 was built around a skeleton of iron arches. 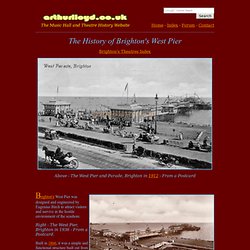 A History of the Pubs of Hastings & St Leonards. Steine House. Steine House is the former residence of Maria Fitzherbert, mistress and wife of the Prince Regent, in the centre of Brighton, part of the English city of Brighton and Hove. 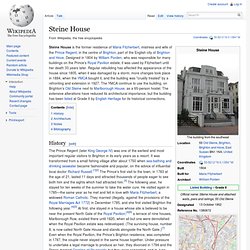 Designed in 1804 by William Porden, who was responsible for many buildings on the Prince's Royal Pavilion estate, it was used by Fitzherbert until her death 33 years later. Regular rebuilding has affected the appearance of the house since 1805, when it was damaged by a storm; more changes took place in 1884, when the YMCA bought it, and the building was "cruelly treated" by a refronting and extension in 1927. The YMCA continue to use the building, on Brighton's Old Steine next to Marlborough House, as a 65-person hostel. The extensive alterations have reduced its architectural importance, but the building has been listed at Grade II by English Heritage for its historical connections. History[edit] Steine House survived an attempt in 1964 to demolish it and replace it with offices, shops and a showroom.

Notes[edit] Brighton ghosts and hauntings - paranormal places and strange activity in Sussex. Cemeteries and crematoria in Brighton and Hove. In 1930, a crematorium was added to the 1857 chapels of the Woodvale Cemetery off Lewes Road, Brighton. 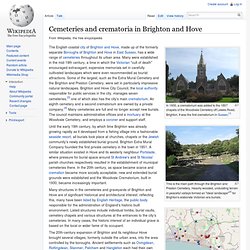 It was the first crematorium in Sussex.[1] This is the main path through the Brighton and Preston Cemetery. Heavily wooded, undulating terrain in peaceful valleys formed an "ideal landscape"[2] for Brighton's elaborate Victorian-era burials. Map of Brighton and Hove showing churchyards and chapel burial grounds (blue) and cemeteries (red). Hover over points to see their name. The English coastal city of Brighton and Hove, made up of the formerly separate Boroughs of Brighton and Hove in East Sussex, has a wide range of cemeteries throughout its urban area. Until the early 19th century, by which time Brighton was already growing rapidly as it developed from a fishing village into a fashionable seaside resort, all burials took place at churches, chapels or the Jewish community's newly established burial ground. History[edit] Development of Hove Cemetery began in 1879.