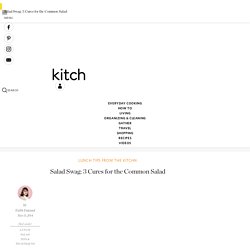 Oh wait, what's that? Salads are your lunch of last resort? Quinoa and Black Bean Salad with Orange-Coriander Dressing. Quinoa and black beans are pillars of our pantry. 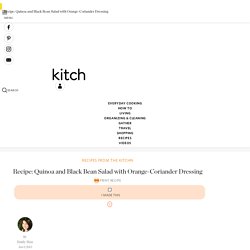 Shredded Egg Salad Recipe - 101 Cookbooks. Warm French Lentil Salad with Bacon & Herbs — Healthy Lunch Recipes from The Kitchn. Last fall I tagged along with my husband on a work trip to Toulouse, France (as one does when one's spouse has meetings in such nice places). 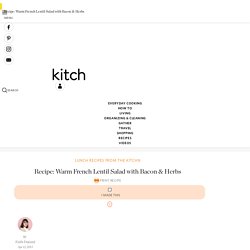 It was our first time in Toulouse, and it was stressful. I feel like the first trip to any new city is a kind of sacrifice to the travel gods, seasoned with blunders and bad maps and jet lag, especially when you don't speak the language or have a credit card with the right kind of chip inside. But in the middle of dripping rain, closed shops, and terrible hotel wifi, our fortunes turned glowing. The reason, of course, was food, and a hospitable table spread with the comforting food of the South of France: terrines, dark soup, good bread, and a perfect lentil salad. A table of students finishing their dinner at Chez Navarre. (Image credit: Faith Durand) I don't remember how we first heard about Chez Navarre; it's lost in the jumble of panicked research one does before landing in a new place.

Well. Makes 4 3/4-cup servings. POWER GREEN SALAD. It was funny how similar in sentiment Hugh and my Valentine's cards were. 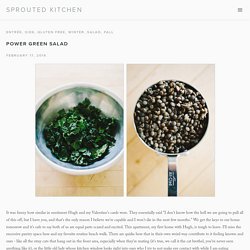 They essentially said "I don't know how the hell we are going to pull all of this off, but I have you, and that's the only reason I believe we're capable and I won't die in the next few months. " We get the keys to our house tomorrow and it's safe to say both of us are equal parts scared and excited. This apartment, my first home with Hugh, is tough to leave. I'll miss the excessive pantry space here and my favorite routine beach walk. There are quirks here that in their own weird way contribute to it feeling known and ours - like all the stray cats that hang out in the front area, especially when they're mating (it's true, we call it the cat brothel, you've never seen anything like it), or the little old lady whose kitchen window looks right into ours who I try to not make eye contact with while I am eating something standing over the sink.

Lunch Recipe: Radicchio Salad with Avocado, Red Quinoa & Ricotta Salata Recipes from The Kitchn. At this moment, I have my kitchen door open, and from my table I can see daffodils, new green grass, and yes, leaves. 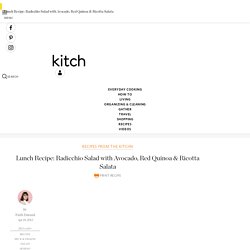 Hallelujah. It's about time. I love winter, and snow, but the leaves are overdue this year and I've missed them. Green leaves mean crunchy leaves on the plate, too — tender lettuce, juicy and crisp. Shaved Fennel, Roasted Tomato & Pistachio Salad with Yogurt Dressing — Recipes From The Kitchn. Baked Goat Cheese Salad with Creamy Walnut Vinaigrette. Warm, gooey goat cheese is not an overrated snack, and in fact, makes eating a salad seem so much more appealing. 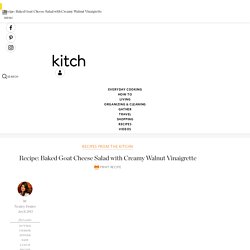 (Well, to me at least.) And when you pair the crunchy, melty nuggets with buttery pecans and bright greens, tossed in a thick walnut vinaigrette...then salad nirvana awaits. Breaded goat cheese salads may have had their heyday back in the nineties, but I happen to think some pretty awesome foods came out of that particular decade. Call me crazy, but I still have a soft spot for barbecue chicken pizza and chocolate molten lava cake. There may have been a few duds in the bunch (remember "fusion" food?) AUTUMN SALAD WITH HORSERADISH VINAIGRETTE + NEWS! Tofu Amaranth Salad Recipe. A good number of you were curious about the tofu and amaranth salad pictured next to these chive pancakes a few weeks back. 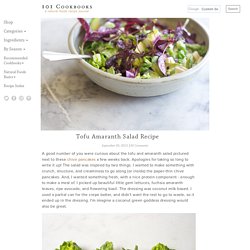 Apologies for taking so long to write it up! The salad was inspired by two things. Lunch Recipe: Golden Quinoa Salad with Lemon, Dill & Avocado Recipes from The Kitchn. It took me a long time to warm up to quinoa. 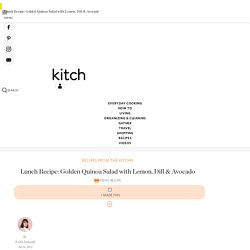 I felt like I was the only one not on the super-grain-(that's-not-really-a-grain-but-who-cares) bandwagon. But my attempts at quinoa had all turned out sticky and faintly bitter, a health food to choke down. So how did I get from there to here, to this lemon-scented golden salad with crunchy bits of cucumber, radish, and almonds? (There are dates, dill, and Parmesan in there too, plus a secret ingredient that really makes it sing.) It only takes one quinoa dish, it turns out, to make a difference. Appropriately enough, my turning point with quinoa came in my direct line of work for The Kitchn.

I asked Lilian how she got her quinoa so delicious, and she described how she rinsed even pre-washed quinoa for several minutes to remove all traces of the bitter coating. Italian Chopped Salad with Creamy Garlic Vinaigrette. Have you ever spent months, years even, trying to replicate a recipe from a favorite restaurant? 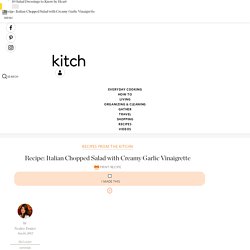 I've been trying to perfect this chopped salad since the day I first tasted it at my beloved red-sauce Italian joint in L.A., and I'm proud to say I think I finally nailed it. (Sans the red checkered tablecloths.) When I lived in California, there was a little hole-in-the-wall Italian restaurant about a half mile from my house. Ensalada. Trigo Burgol + Coliflor. Ahhh, couscous! 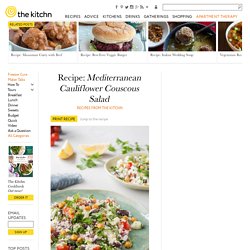 The food so nice they named it twice. Except this isn't really couscous. It's cauliflower. And I feel like I won a gold medal in the kitchen when my couscous loving husband didn't bat an eye while he gobbled up this "pretend" version. Ensalada. Lentejas + Aceitunas + Pepinos. Lentils slip in and out of my consciousness throughout the year, filling out warming stews and serving as a bed for braised meats during the winter, then resurging as a base for cold yet hearty salads in the summer. Every year I revisit this particular salad of lentils, cucumbers, olives, and mint tossed with a sherry vinaigrette, whether to dole out for lunches throughout the week or as a healthy contribution to a summer cookout.

While the obvious pairing with cucumbers and olives is feta, I reach for ricotta just as often instead. I stir in this creamy cheese just before digging in and love the way it mixes with the vinaigrette to create a lustier dressing. I list the option for either cheese in the recipe below. Use whichever you're in the mood for! Ensalada. Trigo + Tomate + Pepino. Olive oil, for cooking 2 large shallots (or 1 sweet onion), finely chopped 2 cups farro (uncooked) 4 cups chicken or vegetable stock 1/4 cup red wine vinegar 2 tablespoons olive oil 1 pint cherry or grape tomatoes, halved or quartered 1/2 large English (hothouse) cucumber, diced 1/4 cup finely chopped basil Kosher salt and freshly ground black pepper. Ensalada. Tomate. It's not really fair to suggest something so definitive as The Perfect Tomato Salad. When it comes to vegetables, especially, so much of perfect has to do with the vegetable itself.

But I had perfect on the brain. We were visiting friends up in the Berkshires of Western Massachusetts and I cooked quite a bit. It started with an enthusiastic hop onto the Perfect Chocolate Chip Cookie bandwagon. Then I found myself making dinner on Friday night, but trying to make it easy. S.Ensalada. A lot of the fruit salads this time of year are sweet. S.Ensaladas. Ensalada. Quinoa + Azuki. One of the most challenging parts of cooking quinoa, for me, is properly rinsing the quinoa.

The holes in my sieve are just a little too big and I end up just barely holding on to the stuff. But the effort is well worth it; once cooked, the texture is unlike anything else. This recipe lends it self to showcase practically any fresh vegetable, cut into small pieces and tossed into the mix. Ensalada. Quinoa Tabbouleh. Ensalada. Quinoa. Homemade green goddess dressing with farm fresh herbs, fresh lemon juice and avocado will have you feeling like a goddess in no time.