How To Make Soft Pretzels. I have so many good memories of soft pretzels: a cold afternoon my first time in New York, Red Sox games at Fenway Park a few years later, a fantastic restaurant in San Francisco that serves them as an appetizer with cheese dip. 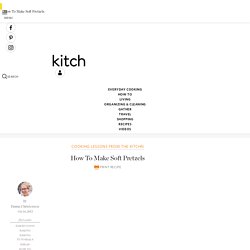 In fact, it was a recent visit to this restaurant that reminded me of my deep and abiding love for this salty, chewy, soft-centered bread — and how, once upon a time, I'd even made them myself. Soft pretzels aren't that hard, really. They are made with a simple dough nearly identical to sandwich bread, and the only tricky part — a leap of faith — comes when you drop the pretzels in a vat of simmering water before baking. But that's why I'm here — to show you how. And also because I believe everyone should get to relive their best memories with a piping-hot soft pretzel every once in a while.

I discovered something interesting in my research: all the recipes were basically the same. How To Make Crackers at Home Cooking Lessons from The Kitchn. Have you ever tried making your own crackers? 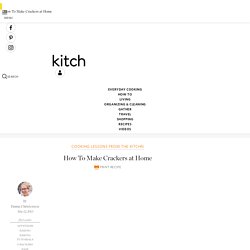 Your very own crispy, crunchy, seed-topped crackers? My recommendation: try it. Definitely. Crackers are surprisingly easy to make at home with just five basic ingredients, a rolling pin, and a baking sheet. Make yourself a quick batch tonight and have homemade crackers for lunches, snacks, and dinners all week long. Homemade crackers strike me as one of those things that seem likely to be more effort than they'd be worth, especially since picking up a box of perfectly decent crackers at the grocery store is so easy.

This recipe is pretty near fool-proof. How to Make Soft and Tender Dinner Rolls. What's a dinner party without a basket of warm rolls on the table? 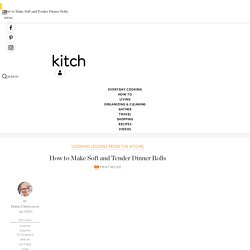 The softer and fluffier the better, I say. All the better to sop up those last bits of sauce. Holiday Breakfast Wreath. I've been writing about this wreath on the site since 2008, each year updating the story, because I think it's worth reminding you how perfect this bread is to start a holiday morning. 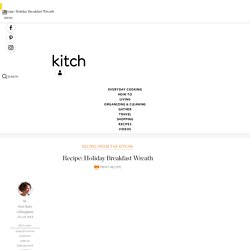 When I say I make it every year, I'm not kidding. It weaves its way deeper and deeper into our family's memory each holiday. Of all the Christmas gifts my mom has given me, the one I remember most and the one that is still with me is the tradition of cooking and eating on Christmas, and it is one that I'm now passing down to my daughter. Eggs Benedict Breakfast. 2 English muffins, split, toasted and buttered 4 thick slices ham or Canadian bacon, warmed 4 poached eggs 1/2 cup Hollandaise Sauce Hollandaise Sauce: 3 large egg yolks 1 1/2 tablespoons cold water 1/2 cup warm clarified butter 1 to 3 teaspoons fresh lemon juice Dash hot red pepper sauce (optional) Salt and ground white pepper to taste Place in the top of a double boiler or in a large stainless-steel bowl set up as a double boiler. 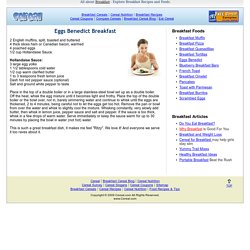 Off the heat, whisk the egg mixture until it becomes light and frothy. Place the top of the double boiler or the bowl over, not in, barely simmering water and continue to whisk until the eggs are thickened, 2 to 4 minutes, being careful not to let the eggs get too hot. Remove the pan or bowl from over the water and whisk to slightly cool the mixture. How To Make English Muffins at Home. There is really no better vehicle for melted butter than the craggy dips and toasted peaks of an English muffin. 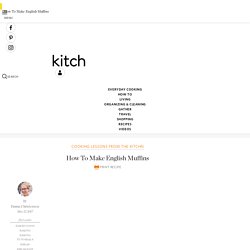 I think we can all agree on this. Have you ever tried making them yourself? They're surprisingly straightforward! No-Knead Sweet Potato Dinner Rolls. In our opinion, a holiday table isn't complete without a big basket of fluffy dinner rolls. 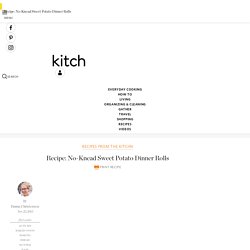 How else are you going to sop up the last bits of gravy? These soft and airy sweet potato rolls are perfect for the job. They're also very nearly foolproof, making them one less thing to worry about when planning the meal. These rolls get a very mild sweetness from the mashed sweet potatoes. Harvest Crackers with Cranberries, Pecans & Rosemary. These might just be the crackers to top all other crackers. 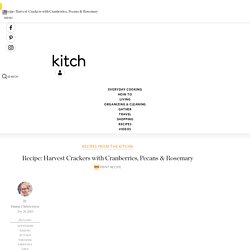 Bon Appétempt: Video Attempt: How to Make a Bread Wreath. No one said that making a bread wreath would be easy. 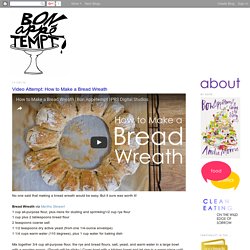 But it sure was worth it! Bread Wreath via Martha Stewart1 cup all-purpose flour, plus more for dusting and sprinkling1/2 cup rye flour1 cup plus 2 tablespoons bread flour2 teaspoons coarse salt1 1/2 teaspoons dry active yeast (from one 1/4-ounce envelope)1 1/4 cups warm water (110 degrees), plus 1 cup water for baking dish. Lena Corwin’s Pumpkin Cranberry Bread – Design*Sponge. Thanksgiving Recipe: Potato Dough Rolls. My mom's potato dough rolls are famous among our extended family and the subject of negotiation, requests, and even squabbling. 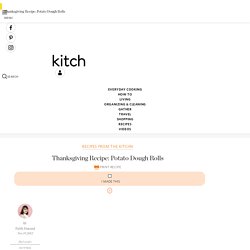 The relatives insist she bring them to every holiday meal: "Is Sandy bringing her rolls? " is all they want to know. As soon as we arrive plates of rolls get squirreled away for cousins who haven't shown up yet, or for "later. " And that's before the meal even starts. Firecracker Cornbread Recipe. If you think you might like a moist, tender buttermilk cornbread packed with corn kernels and flecked with red pepper flakes, this is the recipe to try. Last year I did yeast-raised cornbread for Thanksgiving, and I decided to head in the opposite direction this year. I was after a more traditional cornbread, but added a bit of a spicy twist. I infused a few tablespoons of butter with spicy red pepper flakes, heated them in the pan I would eventually bake the cornbread in, added the batter, baked it off, and ended up with a nice crusty, slightly sweet cornbread with the perfect amount of kick to it.

I actually started thinking about doing a firecracker cornbread around the time I was writing about fire oil in the context of this hummus recipe. Good in lots of things - hummus, muffins....breads. . - More Cornmeal Recipes - - More Side Dish Recipes - Quinoa Skillet Bread Recipe. The farmers' market up the street from my house just started again. It takes place one night a week, now through early fall.

Last week a stroll through the twenty-some booths revealed a bounty of fava beans, strawberries, local micro-climate honeys, pea shoots, mandarins, king trumpet and lion's mane mushrooms, artichokes, and English peas. Oat Soda Bread Recipe. I love making soda bread. Homemade bread slathered with butter in less than an hour? Hard to beat. Rosemary Olive Oil Cake Recipe. This is one of my favorite cakes of the past ten years. A rustic, incredibly moist, golden-crumbed loaf cake, flecked with rosemary, and dotted throughout with big and small chocolate chunks, it's one of those cakes that is both distinctive and memorable in an understated way, and a breeze to make.

We have Kim Boyce to thank for the recipe, and you might remember it from when I originally posted it here after Kim released Good to the Grain back in 2010. I made this beauty over the weekend so that I could send a few thick slices along with Wayne on his flight to Tokyo. :) Error loading player: No playable sources found. Fall Baking Recipe: Rustic White Bread from a Bread Cloche. If you've ever made bread from scratch, found a technique and a recipe you like, and then practiced it a lot, you probably can make a pretty great loaf of bread.

But people who make bread at home often complain that it just doesn't quite approximate the bread they have from a French bakery, which is somehow lighter inside and crispier outside. You've worked so hard, you want a deep brown crust that shatters when you hit it, right? The missing piece is a level of heat and steam that is almost impossible to generate in a conventional home oven. Sun-Dried Tomato & Pesto Rolls Recipes from The Kitchn. Pan. Centeno + Pasas. Por Ibán Yarza (lamemoriadelpan.com, tequedasacenar.com) Brioche. Pan de hamburguesas. Pan casero. Masa. Pan. Banana + Calabaza. Cinnamon Roll. Pan. Zuccini. I think a quick bread with two kinds of chocolate and hidden veggies doesn't require much coercion to make. This loaf cake is straightforward to mix up and it's an ace snack to fulfill those mid-afternoon chocolate cravings. Want to push it more in the dessert direction?

Pan. Banana. Pan. Maíz. Pan. Trigo. Am I too late? I don't know. L.A. is like a remote bubble, totally cut off from reality (in numerous ways). Like, our growing seasons are long if not indefinable. You can get tomatoes at the farmer's market now, and that's just weird. Pan.Polenta.