Coconut Butter Bark by Diabetic Paleo. Normally Wednesdays are our Guest Blogger Series day; but, there’s just so many new and wonderful Paleo and real-food bloggers out there that we’ve expanded our series to two days a week. 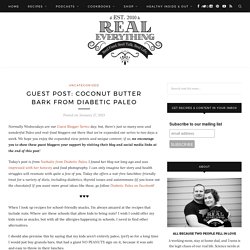 We hope you enjoy the expanded view points and unique content; if so, we encourage you to show these guest bloggers your support by visiting their blog and social media links at the end of this post! Today’s post is from Nathalie from Diabetic Paleo. I found her blog not long ago and was impressed with her honesty and food photography. Nutella Mascarpone Phyllo Bites. My fingers fumbled as I eagerly opened a new jar of Nutella. 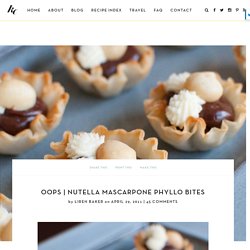 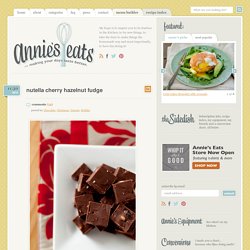 Not that that is particularly different from any other year, but still. I love all sorts of cookies and most candies but for me, fudge is the ultimate holiday treat. I’m not sure exactly why…maybe because we don’t tend to make fudge at any other time of year, so it seems extra special at the holidays. No-Bake Nutella Peanut Butter Cookies. Guilt Free Granola Bars {Two Great Recipes!} Banana Nutella Granola - Sallys Baking Addiction. I have to admit, it’s easy to get wrapped up in sharing my dessert recipes with you all the time. 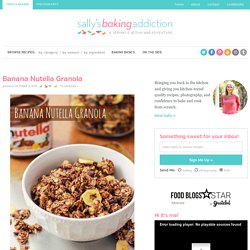 There’s just something about a fudgy brownie and gooey caramel cookie that I know you will love! Maybe it’s all the sugar. But in all honesty, I find the most joy in baking wholesome goodies that aren’t over the top decadent. How To Make Granola Bars at Home — Cooking Lessons from The Kitchn. I am a self-professed granola bar fiend. 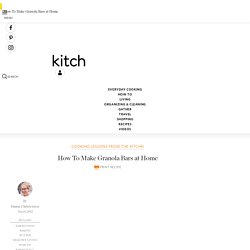 Maybe it's an ingrained snacking habit from the countless bars eaten in the back seat of the car before ballet practice all through grade school. Or maybe it's the fact that I tend to get hangry if I go too long between meals. Either way, I nearly always have a granola bar or two close at hand. Making my own from the assortment of oats, nuts, and dried fruits that are always in my cupboard was a natural next step. I've made a lot of granola bars over the years and have tried everything from honey to maple syrup to bind them together. Brown rice syrup is special because it is versatile. Berry Bliss Oat Squares. My doctor’s appointment went well yesterday. 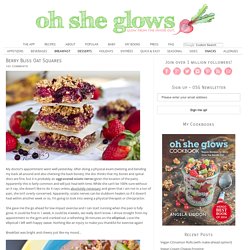 After doing a physical exam (twisting and bending my back all around and also checking the back bones), the doc thinks that my bones and spinal discs are fine, but it is probably an aggravated sciatic nerve (given the location of the pain). Apparently this is fairly common and will just heal with time. While she can’t be 100% sure without an X-ray, she doesn’t like to do X-rays unless absolutely necessary and given that I am not in a ton of pain, she isn’t overly concerned. Apparently, sciatic nerves can be stubborn healers so if it doesn’t heal within another week or so, I’m going to look into seeing a physical therapist or chiropractor. She gave me the go ahead for low impact exercise and I can start running when the pain is fully gone. Breakfast was bright and cheery just like my mood… Cakey, Oaty Energy Bars Packed with Fruits & Seeds.

When I had to adopt a restricted diet last year, I also got a crash course in planning ahead for snacks. 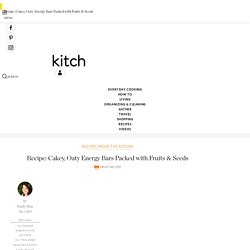 Grabbing an impromptu bite to eat became a lot more complicated, and even store-bought energy bars were off-limits due to various food allergies and intolerances. I quickly developed the habit of always — always! — carrying something edible and energy-boosting in my bag. Packed with fruit and seeds, these oat bars are like a thick, cakey granola bar, and so much more exciting than a bag of GORP.

Heavenly Hash Bars. Just when I thought I'd filled my arsenal with enough delicious homemade holiday treats, along came heavenly hash to sweep them all under the carpet. 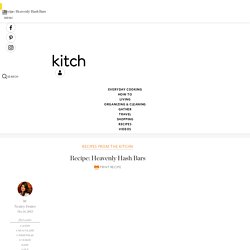 (Well, for today at least.) The combination of bittersweet chocolate, roasted almonds, and marshmallows is truly a gift from above! Heavenly Hash may be better known as an ice cream flavor, but it actually started out as a candy. The homemade treat was originally created by a New Orleans department store to pass out to shoppers, up until the recipe was acquired by Elmer's Candy Corp and promptly launched into large scale production. That was 1923, and the egg-shaped chocolate and marshmallow confection still remains a Louisiana Easter tradition. Brunch Recipe: Cinnamon-Cream Cheese Breakfast Bars Recipes from The Kitchn. Southerners celebrate the good things in life with food, be it an extravagant game-day tailgate, a casual holiday party, or a formal Christmas Eve dinner. 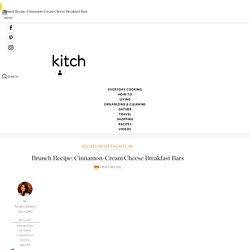 No detail goes unnoticed and no stone goes unturned. My parents' home was recently flooded with friends and family to celebrate an intense — but friendly — college football rivalry. Besides the big game, the weekend was filled with laughter and food, glorious food. Country ham biscuits, Bloody Marys, cheesy dips, smoked barbecue with all the fixin's, mom's famous chili, Texas Layer Cake, and so much more. Brunch Recipe: Caramel-Pecan Sticky Buns Recipes from The Kitchn. These are inspired by what my Southern grandmother called "stickies. 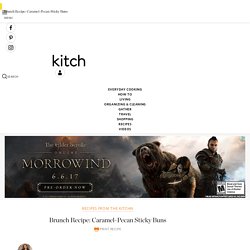 " She would pat out her homemade buttermilk biscuit dough into a rectangle, top it with soft butter and cinnamon-sugar, roll it up into a log, cut it into rounds, and nestle them into a cake pan. Delicious for sure, but some cooks — even accomplished ones — can feel a little intimidated about making homemade biscuits. This short-cut version is equally divine, but really easy. If you can stir up a cake mix, you can make these sticky buns. Homemade Gift Recipe: "Seven Layer" Chocolate Truffles. It doesn't matter what you call them, whether its Seven Layer Bars, Magic Bars, or Hello Dolly's, these nostalgic delights are always reason enough to celebrate. Cocoa Fritters, for Hanukkah. Not to be rude, but there's something a little scary about jelly donuts. It's not the donut part. It's not even the jelly part, to be frank. Edible Gift Recipe: Coconut Ganache Bourbon Balls.

The holidays are here, and every good Southerner knows it's best to be prepared with an arsenal of hostess gifts. And what better way to get any party started than with bourbon? Chocolate ganache covered bourbon balls, that is. I started preparing these to serve at my upcoming Thanksgiving festivities, but they're just so easy I ended up making four (four!) Batches to have on the ready.

To keep things interesting, I decided to do a little experimenting along the way. Batch one was the control group, using a traditional recipe with vanilla wafers and Karo corn syrup. Chocolate Caramel Matzo Brittle Recipes from The Kitchn. It's not Passover yet, and it won't be for about a week. But while Passover gives us an reason to make this candy-like dessert, really there's no need to wait.

Matzo (or matzoh or matzah), the Jewish unleavened cracker-like bread, is the perfect crunchy, flaky base for a thin coating of buttery caramel and melted chocolate, along with whatever toppings your heart desires. Crispy, flaky matzo covered with brown sugar caramel and bittersweet chocolate — this stuff is so addictive you won't want to wait for Passover. A friend of mine prefers to call this "chocolate with an excuse," but I say untrue! The matzo itself is the star, with its shattering crisp and flaky texture. DIY Peppermint Patties. Whether you're planning on making candy for the holidays or want to make your own candy in general, it's a great idea.

Candymaking is both economical and fun, and since you're choosing your own ingredients, you know exactly what's going into it. You can easily make your own organic, low-sugar candy without additives and preservatives. In this post, we'll share a recipe for making your own peppermint patties. How To Make the Easiest Chocolate Fudge. This recipe for fudge is a classic one from my childhood. Salted Pistachio Brittle (Better Than Christmas Cookies!) Cocoa Molasses Toffee. Homemade Gift Recipe: Skillet Toffee Recipes from The Kitchn.

How to Make Soft, Chewy Caramel Candies Cooking Lessons from The Kitchn. Caramels are one of the easiest and (yes) fool-proof candies you can make. Let's talk caramels. The candy kind. No-Bake Recipe: Coconut Snowballs (Gluten-Free, Nut-Free &amp; Vegan!) When it comes to cookies, deliciousness usually arrives in the form of ingredients like flour, butter, sugar, nuts, and chocolate. No-Bake Salted Chocolate Oatmeal Bars. How To Make the Best Coconut Macaroons. Crunchy on the outside, chewy in the middle, a good coconut macaroon is an irresistible thing. Irish Shortbread Toffee Bars Recipes from The Kitchn. Of my hundreds of cherished cookbooks, my old school community cookbooks rank at the top of the class. No-Bake Recipe: Gluten-Free and Vegan Chai-Spiced Pumpkin Bars. Copycat Recipe: Chocolate-Dipped Beer Marshmallows. 4 o'clock No-Bake Energy Bites – QUITOKEETO.