The Philosophy of Games

A game about life, family, and the choices we make. Right on queue. As the queues formed down the street outside branches of Northern Rock this week, it was obvious enough to a game theorist what was going on: people had decided to hunt rabbits. 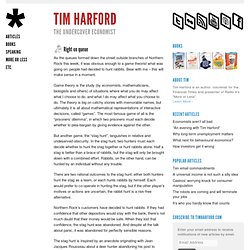 Bear with me – this will make sense in a moment. Game theory is the study (by economists, mathematicians, biologists and others) of situations where what you do may affect what I choose to do, and what I do may affect what you choose to do. The theory is big on catchy stories with memorable names, but ultimately it is all about mathematical representations of interactive decisions, called “games”.

The most famous game of all is the “prisoners’ dilemma”, in which two prisoners must each decide whether to plea-bargain by giving evidence against the other. But another game, the “stag hunt”, languishes in relative and undeserved obscurity. There are two rational outcomes to the stag hunt: either both hunters hunt the stag as a team, or each hunts rabbits by himself. Why Gamers Are Gluttons for Punishment. 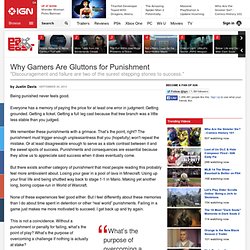 Everyone has a memory of paying the price for at least one error in judgment. Getting grounded. Getting a ticket. Getting a full leg cast because that tree branch was a little less stable than you judged. We remember these punishments with a grimace. But there exists another category of punishment that most people reading this probably feel more ambivalent about.

None of these experiences feel good either. What’s the purpose of overcoming a challenge if nothing is actually at stake? The Philosophy of Game Design (part 1) The Escapist Magazine. If you've ever said that a videogame was "bad" for any reason - is evil, is nothing new, is too hard, is pretentious, is inaccessible, is sexist - in the performance of your royal duties as Grand Arbiter of Good Taste, then you also have to define and articulate what is a "good" game for us simple-minded folk. So, what makes a "good" game? Well, it all depends on whether you believe in absolute truth. (No, really!) For purposes of simplification, I will ignore all traditions of ancient philosophy that took place outside of Greece. Aristotle argued for a type of pluralism, where the purpose of a society was to ensure its individual citizens flourished (and by citizens, he meant only the small portion of Greek society that was the educated male land-owning military and gentry - sorry, women and slaves, no flourishing for you!)

So, an Aristotelian philosophy of game design would presume the existence of a "citizen" - the hardcore gamer. Making Computer Games Is Easy « Meditations on First Gaming Phil. Well, not really. 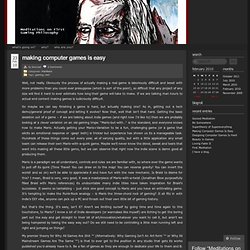 Obviously the process of actually making a real game is laboriously difficult and beset with more problems than you could ever presuppose (which is sort of the point), so difficult that any project of any size will find it hard to ever estimate how long their game will take to make. If we are talking man hours to actual end content making games is ludicrously difficult. So maybe we can say finishing a game is hard, but actually making one?

As in, getting out a tech demo/general proof of concept and letting it evolve? Now that, well that isn’t that hard. Mario is a paradigm we all understand, controls and rules we are familiar with, so where ever the game wants to pull off its quirk (Time Travel! But that’s the thing. My premier theory for Why All Games Are Shit ™ (Alternatively: Why Gaming Isn’t An Art-form ™ or Why All Mainstream Games Are The Same ™) is that to ever get to the position in any studio that gets its works published you’d already have to A. Like this: Taekwan Kim's Blog - Validation Theory. The following blog post, unless otherwise noted, was written by a member of Gamasutra’s community. 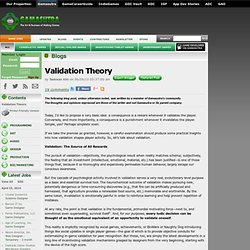 The thoughts and opinions expressed are those of the writer and not Gamasutra or its parent company. Today, I’d like to propose a very basic idea: a consequence is a reward whenever it validates the player. Conversely, and more importantly, a consequence is a punishment whenever it invalidates the player. Simple, yes? Perhaps simplistic even. If we take the premise as granted, however, a careful examination should produce some practical insights into how validation shapes player activity. Validation: The Source of All Rewards. Dissertation « The Dreaming Game Designer. This large post has the final version of my dissertation, be advised that the word count came in at 6585 words, it’s a long read but you should be able to just skip to the Further Issues & The Nature of Puzzles sections right at the end without losing out on too much content. 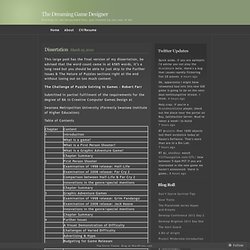 The Challenge of Puzzle Solving in Games – Robert Farr Submitted in partial fulfilment of the requirements for the degree of BA in Creative Computer Games Design at Swansea Metropolitan University (Formerly Swansea Institute of Higher Education) Table of Contents Word Count 6585 Chapter 1: Introduction.