Interactive storytelling. Interactive Storytelling (IS) is a form of digital entertainment in which users create or influence a dramatic storyline through actions, either by issuing commands to the story's protagonist, or acting as a general director of events in the narrative. 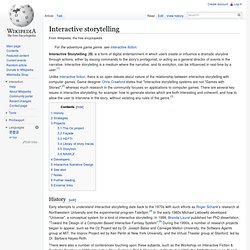 Interactive storytelling is a medium where the narrative, and its evolution, can be influenced in real-time by a user.[1] History[edit] Early attempts to understand interactive storytelling date back to the 1970s with such efforts as Roger Schank's research at Northwestern University and the experimental program TaleSpin.[4] In the early 1980s Michael Liebowitz developed "Universe", a conceptual system for a kind of interactive storytelling. In 1986, Brenda Laurel published her PhD dissertation, "Toward the Design of a Computer-Based Interactive Fantasy System".[5] During the 1990s, a number of research projects began to appear, such as the Oz Project led by Dr. Strategies[edit] Projects[edit] The Oz project[edit] Façade[edit] HEFTI[edit] Main Page - IRISwiki. 2010012. A clash between game and narrative. Steps towards a Generic Interface between Interactive Storytelling Applications and Character Animation Engines. Interactive Storytelling: Second Joint International Conference on ... 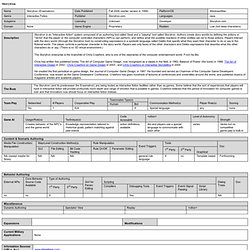 The Future Of Storytelling Is About To Get Wild. Guest author Kim Gaskins is the director of content development and lead writer for Latitude, an international research consultancy. 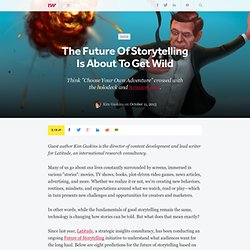 Many of us go about our lives constantly surrounded by screens, immersed in various "stories": movies, TV shows, books, plot-driven video games, news articles, advertising, and more. 'Salinger' and the Future of Multi-Platform Storytelling. Filmmakers are increasingly employing apps, graphic novels, games and books to immerse audiences in their narratives (and, of course, to market their films). 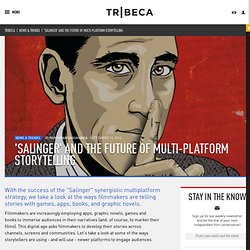 This digital age asks filmmakers to develop their stories across channels, screens and communities. Let's take a look at some of the ways storytellers are using - and will use - newer platforms to engage audiences. Games Games become movies more often than movies are turned into games, but that tide may be turning. Games derived from films are, if done right, spreadable, organic, community-building activities. Apps. Tribeca Film Hackathon: Code As A New Language For Content Creators. The Tribeca Film Institute, best known for its annual film festival, wants to teach filmmakers how to code. 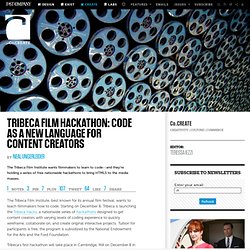 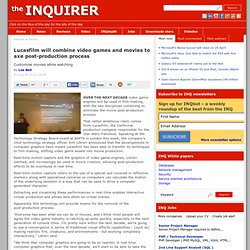 That rather ambitious claim comes from Lucasfilm, the California production company responsible for the Star Wars franchise. Speaking at the Technology Strategy Board event at BAFTA in London this week, the company's chief technology strategy officer Kim Libreri announced that the developments in computer graphics have meant Lucasfilm has been able to transfer its techniques to film-making, shifting video game assets into movie production. An experiment in game design and teaching. Understanding the Game Loop – Basix. Almost every game can be thought of as having one main function that contains all the game logic, and which is run either when the user does something, or after a certain amount of time. 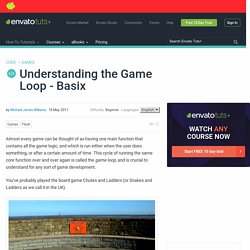 This cycle of running the same core function over and over again is called the game loop, and is crucial to understand for any sort of game development. You've probably played the board game Chutes and Ladders (or Snakes and Ladders as we call it in the UK). Each player rolls the die (or spins the spinner) and moves forward the number of squares indicated. The square they land on may direct them to slide backwards or climb forwards several spaces. The player wins the game when they get to the final square. So, in the above image, landing on Square 6 makes you climb four squares to Square 10; landing on Square 19 makes you slide back 15 squares to Square 4; and landing on Square 64 means you win the game. 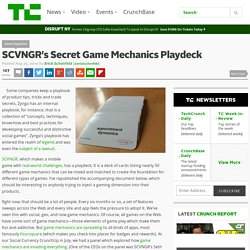 Zynga has an internal playbook, for instance, that is a collection of “concepts, techniques, know-how and best practices for developing successful and distinctive social games”. Zynga’s playbook has entered the realm of legend and was even the subject of a lawsuit. SCVNGR, which makes a mobile game with real-world challenges, has a playdeck. It is a deck of cards listing nearly 50 different game mechanics that can be mixed and matched to create the foundation for different types of games. I’ve republished the accompanying document below, which should be interesting to anybody trying to inject a gaming dimension into their products. Rght now, that should be a lot of people. SCVNGR’s playdeck tries to break down the game mechanics into their constituent parts. 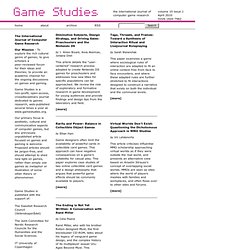 Alison Bryant, Anna Akerman, Jordana Drell This article details the “user-centered” research process adopted to create Nintendo DS games for preschoolers and addresses how new titles for specific populations can be approached. We review the role of exploratory and formative research in game development for young audiences and provide findings and design tips from the laboratory and field.