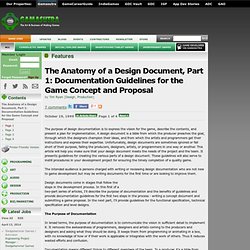 A design document is a bible from which the producer preaches the goal, through which the designers champion their ideas, and from which the artists and programmers get their instructions and express their expertise. Unfortunately, design documents are sometimes ignored or fall short of their purpose, failing the producers, designers, artists, or programmers in one way or another. This article will help you make sure that your design document meets the needs of the project and the team. It presents guidelines for creating the various parts of a design document. Design documents come in stages that follow the steps in the development process. The Purpose of Documentation Documentation means different things to different members of the team.

Level 1: Intro to Game Balance « Game Balance Concepts. Class Announcements I have to admit I was a little surprised to see that people were still signing up for the paid course after it started, but I suppose it’s common enough for people to join a class early in the term. 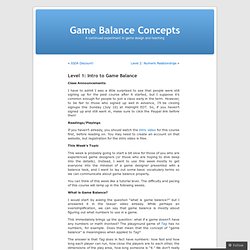 However, to be fair to those who signed up well in advance, I’ll be closing signups this Sunday (July 10) at midnight EDT. So, if you haven’t signed up and still want in, make sure to click the Paypal link before then! Readings/Playings If you haven’t already, you should watch the intro video for this course first, before reading on. This Week’s Topic This week is probably going to start a bit slow for those of you who are experienced game designers (or those who are hoping to dive deep into the details). You can think of this week like a tutorial level. Our 10 Favorite Game Design Articles. Game design is a unique combination of storytelling, engineering and art. 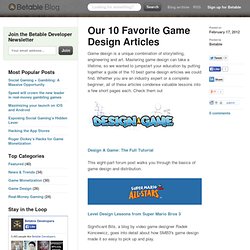 Mastering game design can take a lifetime, so we wanted to jumpstart your education by putting together a guide of the 10 best game design articles we could find. Whether you are an industry expert or a complete beginner, all of these articles condense valuable lessons into a few short pages each. Check them out.

Here's How to Get a Job in the Gaming Industry - I Need to Make Games. Features - What Makes Social Games Social? When people think about online social gaming, two broad categories of games immediately spring to mind: casual social games and hardcore MMOs. 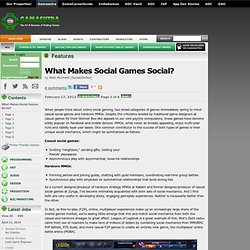 Despite the criticisms leveled by traditional game designers at casual games for their Skinner Box-like appeals to our core psychic compulsions, these games have become wildly popular on Facebook and mobile devices. MMOs, while never as broadly appealing, enjoy multi-year runs and rabidly loyal user bases. Features - The Design of Free-To-Play Games: Part 1. When we talk about free-to-play games, we are not talking of a new genre, but instead of a deep revolution that is affecting most aspects and actors of the game industry: marketing, publishing, hardware manufacturers, and of course, designers and developers. 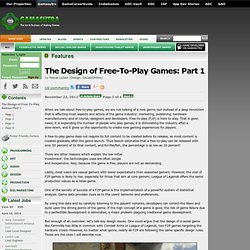 Free-to-play (F2P) is here to stay. That is good news; it is expanding the number of people who play games, it is stimulating the industry after a slow-down, and it gives us the opportunity to create new gaming experiences for players. A free-to-play game does not require its full content to be created before its release, as most content is created gradually after the game launch. Thus Nexon estimates that a free-to-play can be released with only 50 percent of its final content, and for Playfish, the percentage is as low as 20 percent! There are other reasons which explain the low initial investment: the technologies used are often simple and inexpensive. But enough of an overview: let's talk key design issues. Combat Arms.

Features - How Tough Is Your Game? Creating Difficulty Graphs. [Having trouble figuring out how difficult your game really is? 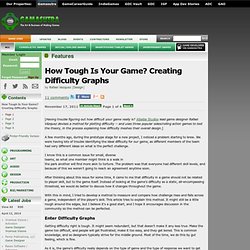 Xibalba Studios lead game designer Rafael Vázquez devises a method for plotting difficulty -- and uses three popular sidescrolling action games to test the theory, in the process explaining how difficulty meshes their overall design.] A few months ago, during the prototype stage for a new project, I noticed a problem starting to brew. We were having lots of trouble identifying the ideal difficulty for our game, as different members of the team had very different ideas on what is the perfect challenge. I know this is a common issue for small, diverse teams, as what one member might think is a walk in the park another will find more akin to torture. The problem was that everyone had different skill levels, and because of this we weren't going to reach an agreement anytime soon.

Battle Mechanics. Games Changed My Life - Thoughts on social games, social media and 'gamifying' mass market services. The Gamer Brain. I just came across a really good wiki on gamification and I found the chart below very interesting. 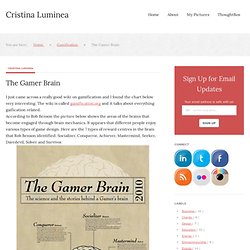 The wiki is called gamification.org and it talks about everything gaification related. According to Rob Benson the picture below shows the areas of the brains that become engaged through brain mechanics. It appears that different people enjoy various types of game design. Here are the 7 types of reward centres in the brain that Rob Benson identified: Socializer, Conqueror, Achiever, Mastermind, Seeker, Daredevil, Solver and Survivor. In case you can not read the chart above here is a transcription of the descriptions of each reward centre: Conqueror (Defeat): Science: Some players are not satisfied with winning early – they want to struggle against adversity and fight tooth and nail for victory.

What makes you tick? Looking forward to your thoughts. Game Design Concepts. Opinion: This Is The Game That Doesn't End. [Looking at feedback from her recent iOS release, Mobili Studio's Hsiao Wei Chen examines if it's preferable to build levels or to implement infinitely replayable stages, in this #altdevblogaday-reprinted opinion piece.] 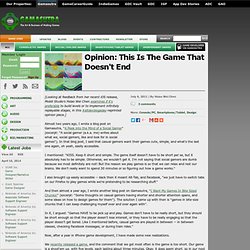 Almost two years ago, I wrote a blog post on Gamasutra, "A Peek into the Mind of a Social Gamer" (excerpt: "A social gamer (a.k.a. me) writes about what we, social gamers, like and look for in social games"). In that blog post, I said that casual gamers want their games cute, simple, and what's the last one again, oh yeah, easily accessible. I mentioned: "KISS.

Keep it short and simple. The game itself doesn't have to be short per se, but it absolutely has to be simple. I also brought up easily accessible -- back then it meant Alt-Tab, and Facebook, "we just have to switch tabs on our Firefox to play games while we're pretending to be researching stuff. " Hsiao Wei Chen's Blog - A Peek into the Mind of a Social Gamer. The following blog post, unless otherwise noted, was written by a member of Gamasutra’s community. 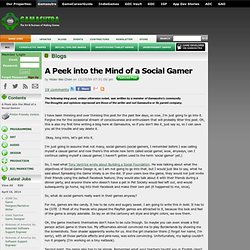 The thoughts and opinions expressed are those of the writer and not Gamasutra or its parent company. I have been thinking and over thinking this post for the past few days, so now, I'm just going to go into it. Forgive me for the occasional stream of consciousness and enthusiasm that will probably litter this post. Features - Building the Foundation of a Social Future. To say that social games are booming is an understatement. 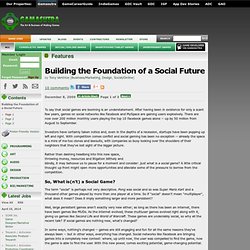 After having been in existence for only a scant few years, games on social networks like Facebook and MySpace are gaining users explosively. There are now over 200 million monthly users playing the top 10 Facebook games alone -- up by 50 million from August to September. Investors have certainly taken notice and, even in the depths of a recession, startups have been popping up left and right. With competition comes conflict and social gaming has been no exception -- already the space is a mire of me-too clones and lawsuits, with companies so busy looking over the shoulders of their neighbors that they've lost sight of the bigger picture. Simplification. I Have No Words & I Must Design.

This article was published in 1994 in Interactive Fantasy #2, a British roleplaying journal. A more recent version of the piece may be found here. There's a lotta different kinds of games out there. A helluva lot. The Art & Business of Making Games.