World’s first mobile brain scanner with a Nokia N900. Conversations' Karen Bartlett met the team who can read your mind with a phone. 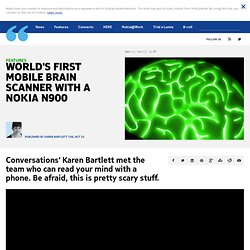 Be afraid, this is pretty scary stuff. Jim Fallon is a world-renowned neuroscientist. He’s also a potential psychopath, or so say the results of a brain scan and a series of genetic tests that he undertook to check if he was prone to Alzheimer’s disease. “Luckily I took those tests at the end of my career, I was just at the point of retiring. NeuGRID/outGRID/DECIDE/N4U - Information Centre - Research & Innovation. In order to reduce development time for new effective drugs, and thus improve the quality of life and reduce the social costs of disease, it is necessary to identify markers of disease or biological parameters that allow accurate and early diagnosis of the disease and its progression. 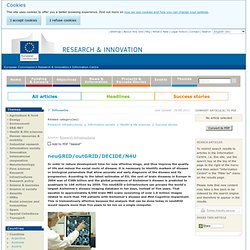 According to the latest estimates of EU, the cost of brain diseases in Europe in 2004 was of €386 billion and the global prevalence of Alzheimer's disease is predicted to quadruple to 106 million by 2050. The neuGRID e-Infrastructure can process the world's largest Alzheimer's disease imaging database in ten days, instead of five years. That equates to approximately 6,500 brain MRI scans consisting of over 1.6 million images related to more than 700 patients with Alzheimer's disease and Mild Cognitive impairment. Robots for brain surgery? EU project shows how - Information Centre - Research & Innovation. An EU-funded team of researchers has developed a robot able to help neurosurgeons in performing keyhole brain surgery. 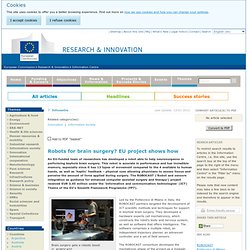 This robot is accurate in performance and has incredible memory, especially since it has 13 types of movement compared to the 4 available to human hands, as well as 'haptic' feedback – physical cues allowing physicians to assess tissue and perceive the amount of force applied during surgery. The ROBOCAST ('Robot and sensors integration as guidance for enhanced computer assisted surgery and therapy') project received EUR 3.45 million under the 'Information and communication technologies' (ICT) Theme of the EU's Seventh Framework Programme (FP7).

Led by the Politecnico di Milano in Italy, the ROBOCAST partners targeted the development of ICT scientific methods and techniques for support in keyhole brain surgery. They developed a hardware experts call mechatronics, which constructs the robot's body and nervous system, as well as software that offers intelligence. Scanadu Raises $2M For Medical Tricorder (video. Scanadu's Medical Tricorder works with your smartphone to takes vitals and diagnose disease non-invasively and at home. 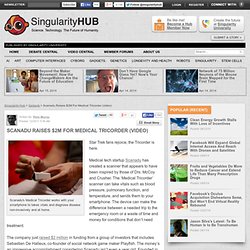 Star Trek fans rejoice, the Tricorder is here. Medical tech startup Scanadu has created a scanner that appears to have been inspired by those of Drs. McCoy and Crusher. The ‘Medical Tricorder’ scanner can take vitals such as blood pressure, pulmonary function, and temperature, and sends them to your smartphone. The device can make the difference between a needed trip to the emergency room or a waste of time and money for conditions that don’t need treatment. Anders Ynnerman: Visualizing the medical data explosion. Portable ECG technology making a splash in rural areas, potential for widespread adoption. Maestros Mediline Systems Limited, an Indian medical device maker, launched a telemedicine platform using their portable ECG device, E-UNO R-10 (not the catchiest we’ve ever heard) nearly a year ago.

In partnership with Vodafone, this device would transmit ECG’s over Vodafone’s network to a cardiologists mobile phone, initially with Blackberry support only. The cardiologist could then reply with a diagnosis and recommendation for the on-site provider. Currently, the ECG device called E-UNO R-10 is being used in rural areas around Mumbai, though they are currently looking to expand into central India as well. Ford Unveils Contactless ECG. 13inShare Just a week ago, Ford announced partnerships for its in-car health management system, and now it is unveiling another, this time self-developed, auto part: a contactless ECG sensing driver’s seat. 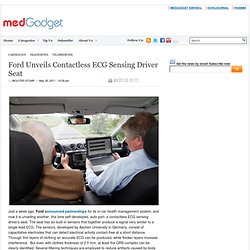 The seat has six built-in sensors that together produce a signal very similar to a single lead ECG. The sensors, developed by Aachen University in Germany, consist of capacitative electrodes that can detect electrical activity contact-free at a short distance. Through thin layers of clothing an accurate ECG can be produced, while thicker layers increase interference. MobiSante mobile ultrasound live demonstration at the mHealth Summit, update on Android support #mHS11. Mobisante made its first big waves a little over a year ago with their ultrasound peripheral for smartphones as MobiUS began to accumulate awards all over the country. 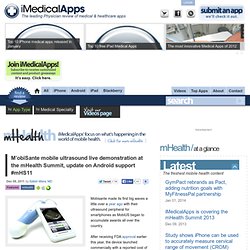 After receiving FDA approval earlier this year, the device launched commercially with a reported cost of just under $8,000, comparable to other mobile ultrasound devices but with the additional benefit of wireless connectivity. We caught up with Mobisante Chief Engineer Nikhil George at the mHealth Summit for a live demonstration of the latest version of the MobiUS device. There are now several different probes available with varying frequencies and also a pairing configuration available with a tablet. In addition to the demo, we also got an update on their move to support Android devices. We reported the possibility of Android integration a few weeks ago after reports that Android 4.0 (Ice Cream Sandwich) would enable USB 2.0 host support. Mr. Check out our live demo below!