Speculations on Future Stellar Engineering. Dyson sphere. Dyson sphere is a hypothetical megastructure that completely encompasses a star and hence captures most or all of its power output. 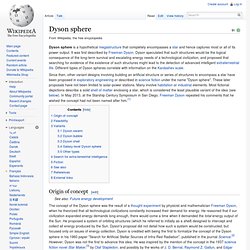 It was first described by Freeman Dyson. Dyson speculated that such structures would be the logical consequence of the long-term survival and escalating energy needs of a technological civilization, and proposed that searching for evidence of the existence of such structures might lead to the detection of advanced intelligent extraterrestrial life. Different types of Dyson spheres correlate with information on the Kardashev scale. Since then, other variant designs involving building an artificial structure or series of structures to encompass a star have been proposed in exploratory engineering or described in science fiction under the name "Dyson sphere".

These later proposals have not been limited to solar-power stations. Origin of concept[edit] Feasibility[edit] Variants[edit] Dyson swarm[edit] Star lifting. Star lifting is any of several hypothetical processes by which a highly advanced civilization (at least Kardashev-II) could remove a substantial portion of a star's matter in a controlled manner for other uses.

The term appears to have been coined by David Criswell. Stars have deep gravity wells, so the energy required for such operations is large. For example, lifting solar material from the surface of the Sun to infinity requires 2.1 × 1011 J/kg. Variations in stellar types. Evolution of a massive Star. The Universe: Supernovae. Stellar Evolution: Red Giants. A star's evolution after the red giant phase depends on its mass. 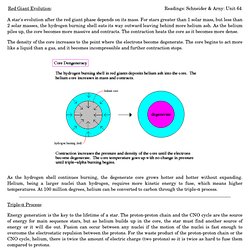 For stars greater than 1 solar mass, but less than 2 solar masses, the hydrogen burning shell eats its way outward leaving behind more helium ash. As the helium piles up, the core becomes more massive and contracts. The contraction heats the core as it becomes more dense. The density of the core increases to the point where the electrons become degenerate. The core begins to act more like a liquid than a gas, and it becomes incompressible and further contraction stops. As the hydrogen shell continues burning, the degenerate core grows hotter and hotter without expanding. Triple-α Process: Astronomy and Physics Experiments. Use our star simulator to build your own star! 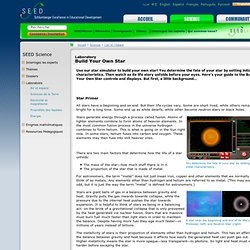 You determine the fate of your star by setting initial characteristics. Then watch as its life story unfolds before your eyes. Here’s your guide to the Build Your Own Star controls and displays. But first, a little background… Phases of stellar evolution. Stellar Death. Stellar Death. For stars less than about 25 solar masses the end of their lives is to evolve to white dwarfs after substantial mass loss. 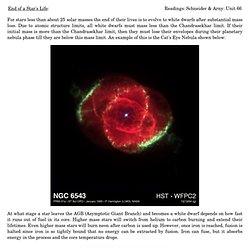 Due to atomic structure limits, all white dwarfs must mass less than the Chandrasekhar limit. If their initial mass is more than the Chandrasekhar limit, then they must lose their envelopes during their planetary nebula phase till they are below this mass limit. An example of this is the Cat's Eye Nebula shown below: At what stage a star leaves the AGB (Asymptotic Giant Branch) and becomes a white dwarf depends on how fast it runs out of fuel in its core. Higher mass stars will switch from helium to carbon burning and extend their lifetimes. After evolving to white dwarfs, stars with original masses less than 25 solar masses slowly cool to become black dwarfs and suffer heat death. Stars greater than 25 solar masses undergo a more violent end to their lives. Supernova Remnants. Simeis 147. It is believed that after its stellar explosion a rapidly spinning neutron star known as pulsar PSR J0538+2817 was left behind in the nebula core, emitting a strong radio signal.[4] References[edit] External links[edit] Coordinates: 05h 41m 00s, +28° 06′ 13″ 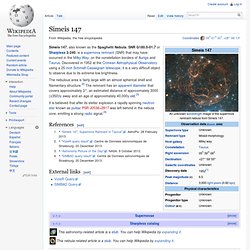 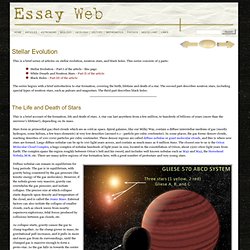 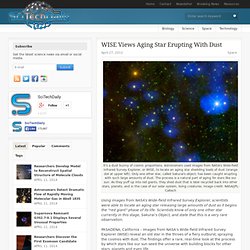 Astronomers used images from NASA's Wide-field Infrared Survey Explorer, or WISE, to locate an aging star shedding loads of dust (orange dot at upper left). Only one other star, called Sakurai's object, has been caught erupting with such large amounts of dust. The process is a natural part of aging for stars like our sun. As they puff up into red giants, they shed dust that is later recycled back into other stars, planets, and in the case of our solar system, living creatures.

Stellar Middle Age. Stellar evolution. Astro 10 - Feb 18. READING: Chapter 12.4 – 12.6 High Mass Star Stellar Evolution A star will remain happily in equilibrium as long as there is some internal source of pressure to balance the inward pull of gravity. 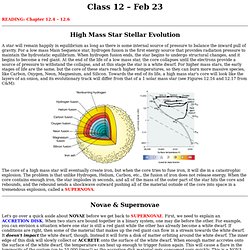 For a low mass Main Sequence star, hydrogen fusion is the first energy source that provides radiation pressure to maintain the hydrostatic equilibrium. When hydrogen fusion ends, the star begins to undergo structural changes, and it begins to become a red giant. At the end of the life of a low mass star, the core collapses until the electrons provide a source of pressure to withstand the collapse, and at this stage the star is a white dwarf. John Lattanzio's Stellar Evolution Tutorial Page M1Z02. We resume the evolution as the star ascends the giant branch. 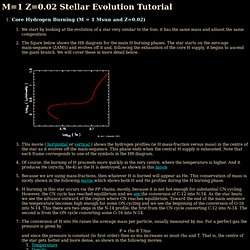 The He core is contracting and gradually heating, but it is also getting denser and more degenerate. A completely degenerate gas has a polytropic equation of state, which means that the pressure is given by P = K rho^gamma and has no temperature dependence. Now a normal gas will respond to a temperature increase by expanding (ie decreasing rho, to keep P constant). That does not happen in a degenerate gas (at least, not to the same extent, and not at all for a completely degenerate gas). Star Formation. The birth of a baby star: NASA acts as midwife to watch new creation burst into life. By Eddie Wrenn Published: 14:06 GMT, 13 July 2012 | Updated: 14:18 GMT, 13 July 2012 Like an intergalactic midwife, NASA has been carefully monitoring a stellar infant still partly swaddled in its birth cloud. Huge stellar nursery found in dusty corner of our galaxy - space - 23 June 2009. A VAST stellar nursery 14,000 light years away has been hiding behind a thick cloud of dust. 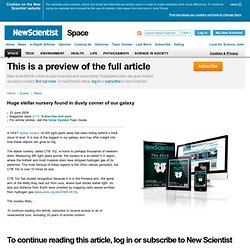 It is one of the biggest in our galaxy, and may offer insight into how these objects can grow so big. The stellar nursery, called CTB 102, is home to perhaps thousands of newborn stars. Measuring 380 light years across, the nursery is a so-called H II region, where the hottest and most massive stars have stripped hydrogen gas of its electrons. The most famous of these regions is the Orion nebula (pictured), but CTB 102 is over 10 times its size. CTB 102 has eluded recognition because it is in the Perseus arm, the spiral arm of the Milky Way next out from ours, where dust blocks visible light.