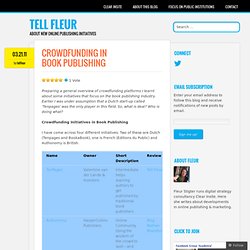 Earlier I was under assumption that a Dutch start-up called ‘Tenpages’ was the only player in this field. So, what is deal? Who is doing what? Crowdfunding Initiatives in Book Publishing I have come across four different initiatives. As you can tell from the included table you can find information about the separate platforms at different locations. Via Tenpages authors can upload ten pages of their manuscript hoping to convince enough readers to invest in the manuscript and become a financial supporter. Authonomy follows a similar route, but it is different in the fact that supported manuscripts are published by the owner of the platform, HarperCollins, not by partner organisations.

When I come to think of it, Authonomy is not a crowdfunding but a crowdsourcing initiative at most. Crowdscribed.com: An 18th Century Publishing Model for the 21st. Books are now in your hands. Pubslush. Unglue.it. New Post - MARKETPLACE FOR JOURNALISM. Schrijversmarkt.nl. Publishing your own book: discover (you) writing talent. Books are now in your hands. Crowdfunding, Micropayments and Publishers. ©Naveen Jamal I was reading an article in Fast Company about the launch of Emphas.is and came across an aspect about the model that I really hadn’t thought much about – the role and opportunity for publishers. 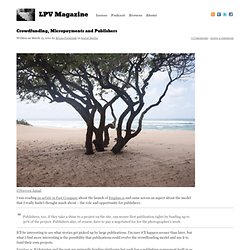 Publishers, too, if they take a shine to a project on the site, can secure first publication rights by funding up to 50% of the project. Publishers also, of course, have to pay a negotiated fee for the photographer’s work. It’ll be interesting to see what stories get picked up by large publications. I’m sure it’ll happen sooner than later, but what I find more interesting is the possibility that publications could evolve the crowdfunding model and use it to fund their own projects. Emphas.is, Kickstarter and the rest are primarily funding platforms but each has a publishing component built in as well (blogs) which make them content destinations as well. The Evolution of the Platforms Crowdfunding platforms are still very new. 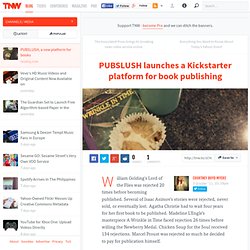 Several of Isaac Asimov’s stories were rejected, never sold, or eventually lost. Agatha Christie had to wait four years for her first book to be published. Madeline L’Engle’s masterpiece A Wrinkle in Time faced rejection 26 times before willing the Newberry Medal. Chicken Soup for the Soul received 134 rejections. Marcel Proust was rejected so much he decided to pay for publication himself. While inspiring, it begs the question: how many talented novelists gave up at rejection number 15? Clearly, there’s something a bit off between what publishers regard as worthy and what people want to read. Here’s how it works: Authors upload a sample of their work to the website and then users read, share, and support what they’d like to see published. Check out this beautiful video with music by Explosions in the Sky illustrating the PUBSLUSH cause.

PUBSLUSH will publish titles in printed and digital formats.