Crowdfunding Clean Energy. Linear Dynamics Energy - HOME. The role of crowd funding in renewable energy and clean technology. As traditional sources of investment finance continue to remain scarce, will the movement towards crowd-funding prove to be the perfect solution for clean technology projects? 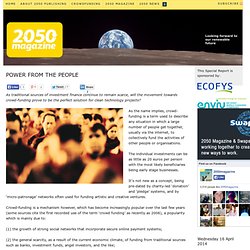 As the name implies, crowd-funding is a term used to describe any situation in which a large number of people get together, usually via the internet, to collectively fund the activities of other people or organisations. The individual investments can be as little as 20 euros per person with the most likely beneficiaries being early stage businesses. It’s not new as a concept, being pre-dated by charity-led ‘donation’ and ‘pledge’ systems, and by ‘micro-patronage’ networks often used for funding artistic and creative ventures. Crowd-funding is a mechanism however, which has become increasingly popular over the last few years (some sources cite the first recorded use of the term ‘crowd funding’ as recently as 2006), a popularity which is mainly due to: The next most significant barrier to growth is trust. Lumo - Financement citoyen de projets d'énergies renouvelables. 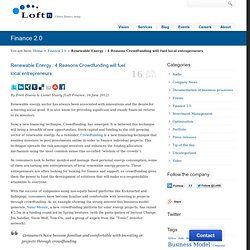 It is also know for providing significant and steady financial returns to its investors. Now, a new financing technique, Crowdfunding, has emerged. It is believed this technique will bring a breadth of new opportunities, fresh capital and funding to the still growing sector of renewable energy. As a reminder, Crowdfunding is a new financing technique that enables investors to pool investments online in order to finance individual projects. As consumers look to better monitor and manage their personal energy consumption, some of them are turning into entrepreneurs of local renewable energy projects. With the success of companies using non-equity based platforms like Kickstarter and Indiegogo, consumers have become familiar and comfortable with investing in projects through crowdfunding. 1. 2. 3. 4. About Loft Solutions. The clean energy revolution will be crowd funded — Cleantech News and Analysis.

The Kickstarter for solar could make you money starting this Summer — Cleantech News and Analysis. SunFunder. Extraordinary popular solution: funding from crowds? Executive Summary “Crowdfunding” allows early-stage companies, projects, and artistic ventures in the US to attract financing from the masses over the Internet and provides developing world microfinance initiatives a new avenue to secure capital. 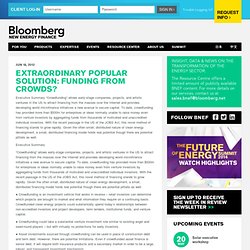 To date, crowdfunding has provided more than $500m for enterprises or ideas normally unable to raise money even from venture investors by aggregating funds from thousands of motivated and unaccredited individual investors. With the recent passage in the US of the JOBS Act, this novel method of financing stands to grow rapidly. How crowdfunding could revolutionize solar — Cleantech News and Analysis. Crowdfunding Wind & Solar Projects in the UK. Clean Power Published on April 23rd, 2012 | by Zachary Shahan Community-funded or crowdfunded wind and solar power is now being encouraged in the UK by renewable energy networking site EnergyShare, which is offering up £5,000 each for the first 5 renewable energy projects that also raise £5,000 on their own via the crowdfunding website. 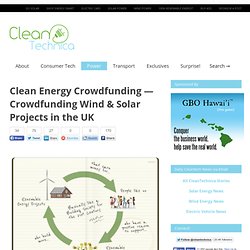 Another company, Abundance Energy, is also trying to get individuals and businesses to help fund and gain from clean energy projects, encouraging them to invest as little as £5 in wind turbines for an upcoming project. Is crowdfunding about to sweep into the clean energy sector? This is similar to what Solar Mosaic is doing in the US and what the Solar Schools program is doing for schools across the UK, but it is still a rather quiet trend, and the question is, will it take off?