_Crypto Tools. The Case for Elliptic Curve Cryptography - NSA/CSS. Background: Over the past 30 years, public key cryptography has become a mainstay for secure communications over the Internet and throughout many other forms of communications. 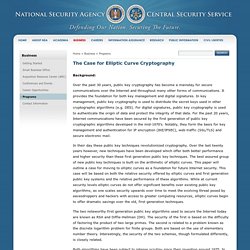 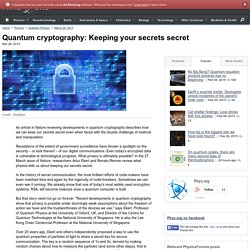 Revelations of the extent of government surveillance have thrown a spotlight on the security – or lack thereof – of our digital communications. Even today's encrypted data is vulnerable to technological progress. What privacy is ultimately possible? In the 27 March issue of Nature, researchers Artur Ekert and Renato Renner review what physics tells us about keeping our secrets secret. In the history of secret communication, the most brilliant efforts of code-makers have been matched time and again by the ingenuity of code-breakers. But that story need not go on forever. Over 20 years ago, Ekert and others independently proposed a way to use the quantum properties of particles of light to share a secret key for secure communication.

Explore further: Quantum physics secures new cryptography scheme. Gpg4win - Secure email and file encryption with GnuPG for Windows. The GNU Privacy Guard. ▶ Use OpenPGP to encrypt your email messages and files in the cloud. Putting sensitive data in email messages or cloud storage should give you the heebie-jeebies, but a good dose of cryptography can give you peace of mind. 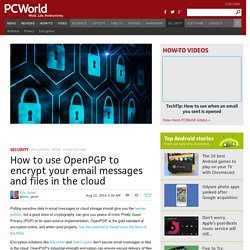 Pretty Good Privacy (PGP) or its open-source implementation, OpenPGP, is the gold standard of encryption online, and when used properly, has the potential to thwart even the likes of the NSA. Encryption solutions like BitLocker and DiskCryptor don’t secure email messages or files in the cloud. OpenPGP's industrial-strength encryption can ensure secure delivery of files and messages, as well as provide verification of who created or sent the message using a process called digital signing.

Using OpenPGP for communication requires participation by both the sender and recipient. You can also use OpenPGP to secure sensitive files when they’re stored in vulnerable places like mobile devices or in the cloud. Cryptography Links. WHERE TO GET PGP (Pretty Good Privacy) Revised 17 June 2014 This FAQ applies to Pretty Good Privacy (PGP), Gnu Privacy Guard (GPG), and some other OpenPGP implementations.

Disclaimer: some of this information may be outdated or otherwise inaccurate. I don't update it very often, but you should by all means be able to find an appropriate copy of PGP and its documentation using the information contained herein. How PGP works. How PGP works The following text is taken from chapter 1 of the document Introduction to Cryptography in the PGP 6.5.1 documentation. 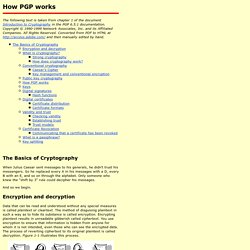 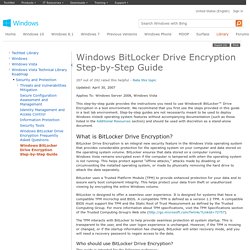 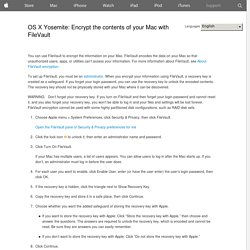 FileVault encodes the data on your Mac so that unauthorized users, apps, or utilities can’t access your information. For more information about FileVault, see About FileVault encryption. To set up FileVault, you must be an adminstrator. Dm-crypt - a device-mapper crypto target. Note: This page is horribly out of date. 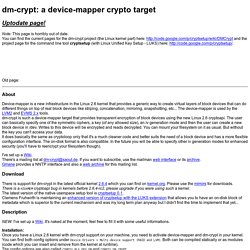 You can find the current pages for the dm-crypt project (the Linux kernel part) here: and the project page for the command line tool cryptsetup (with Linux Unified Key Setup - LUKS) here: Old page: About Device-mapper is a new infrastructure in the Linux 2.6 kernel that provides a generic way to create virtual layers of block devices that can do different things on top of real block devices like striping, concatenation, mirroring, snapshotting, etc... TrueCrypt. DiskCryptor wiki. OS X: About FileVault 2 - Apple Support. FileVault 2 uses full disk, XTS-AES 128 encryption to help keep your data secure. 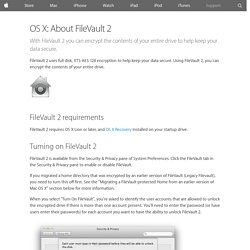 Using FileVault 2, you can encrypt the contents of your entire drive. FileVault 2 requirements FileVault 2 requires OS X Lion or later, and OS X Recovery installed on your startup drive. Net accounts / Net user / Net group. MS-DOS echo command help. Quick links About echoAvailabilitySyntaxExamples About echo Echo is used to repeat the text typed in back to the screen and can be used to echo to a peripheral on the computer, such as a COM port. 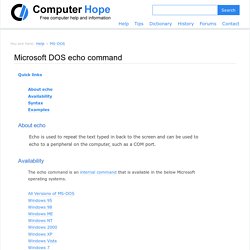 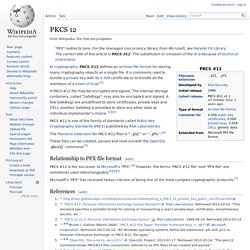 For the managed concurrency library from Microsoft, see Parallel FX Library. In cryptography, PKCS #12 defines an archive file format for storing many cryptography objects as a single file. It is commonly used to bundle a private key with its X.509 certificate or to bundle all the members of a chain of trust.[1] A PKCS #12 file may be encrypted and signed.

The internal storage containers, called "SafeBags", may also be encrypted and signed. The Encrypting File System. Ap19. NTRU. NTRUEncrypt, the fastest public key algorithm you've never heard of. Here comes the fastest public-key algorithm that most people have never heard of: It's called NTRUEncrypt and this month was approved by the financial services standards body, the Accredited Standards Committee X9. The X9.98 standard specifies how to use NTRU, as it's called for short, in financial transactions. "The NTRU public-key algorithm competes with RSA and elliptic curve" says Ed Adams, CEO of Security Innovation, which owns the rights and patents associated with the NTRU algorithm. It was invented in the mid-1990s. Unlike RSA, NTRU is not widely used, and in fact the NTRU cryptosystem needed changes early on to improve its security by addressing weaknesses and performance.

But today NTRU is recognised as faster than the widely used RSA algorithm. "It is considerably faster, that is something we acknowledge," says RSA Labs chief scientist Ari Juels. "A quantum bit assumes multiple values simultaneously and can explore a massive key length," Juels acknowledges.