From Failure to Famous

Walt Disney - Producer, Entrepreneur. Walt Disney was an American motion-picture and television producer and showman, famous as a pioneer of cartoon films and as the creator of Disneyland. 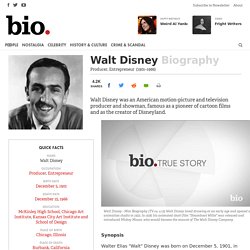