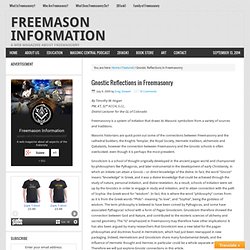 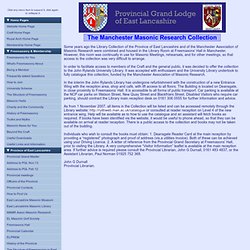 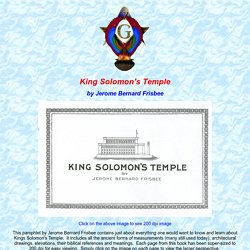 It includes all the ancient forms of measurements (many still used today), architectural drawings, elevations, their biblical references and meanings. Each page from this book has been super-sized to 200 dpi for easy viewing. Simply click on the image on each page to view the larger perspective. Scanned at Phoenixmasonry, Inc. by David Lettelier - November 2005. Knights of Malta - 1523 - 1798 by R. Cohen. Book of the Ancient & Accepted Scottish Rite (1884 Edition) by Charles T. McClenechan. Masonic E-Book Library. Note: Many of the e-books in this library are several hundred pages long and include illustrations. 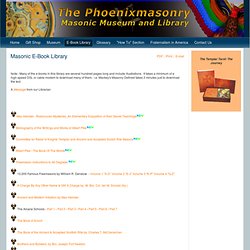 It takes a minimum of a high-speed DSL or cable modem to download many of them. i.e. Mackey's Masonry Defined takes 3 minutes just to download the text. A Message from our Librarian Max Heindel - Rosicrucian Mysteries_An Elementary Exposition of their Secret Teachings. History of the Knights Templar - Table of Contents. Masonic Books Online for Freemasons. By V.W. 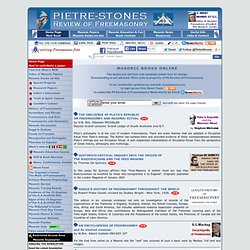 Bro. Stephen MICHALAKDeputy Grand Lecturer, Grand Lodge of South Australia and N.T. Plato’s philosophy is at the core of modern Freemasonry. There are many themes that are adopted in Emulation Ritual from Plato’s writings. The Author has isolated them and provided evidence of these correspondences between Plato’s writings and our Emulation Ritual.

Bonisteel_Masonic_Library. Freemasonry 101. ANTI-MASONRY in the CONTEMPORARY WORLD. The Master of a Lodge - who, when addressed, is given the honorific title of "Worshipful" - presides over the meeting of Masons. 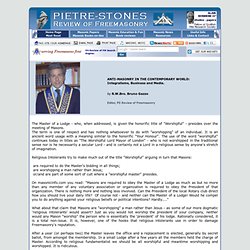 The term is one of respect and has nothing whatsoever to do with "worshipping" of an individual. It is an ancient word usage with a meaning similar to the honorific "Your Honour". The use of the word "worshipful" continues today in titles as "The Worshipful Lord Mayor of London" - who is not worshipped in the traditional sense nor is he necessarily a secular Lord - and is certainly not a Lord in a religious sense by anyone's stretch of imagination.

Religious Intolerants try to make much out of the title "Worshipful" arguing in turn that Masons: are required to do the Master's bidding in all things; are worshipping a man rather than Jesus; or/and are part of some sort of cult where a "worshipful master" presides. What about that claim that Masons are "worshipping" a man rather than Jesus - as some of our more dogmatic 'religious intolerants' would assert? 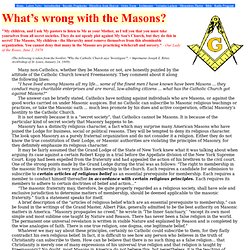 "My children, and I ask My pastors to listen to Me as your Mother, as I tell you that you must take yourselves from all secret societies. They do not openly plot against My Son's Church, but they do this in secret! The Masons, My children - the Hierarchy must remove themselves from this abominable organization. Interviu cu Leo Zagami, fost francmason de grad 33 în cadrul lojii Propaganda Due. 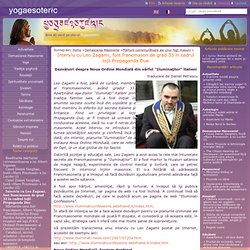 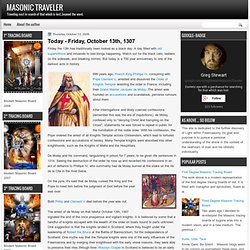 A day filled with old superstitions and innuendo to bad things happening. Watch out for the black cats, ladders on the sidewalk, and breaking mirrors. But today is a 700 year anniversary to one of the darkest acts in history. 699 years ago, French King Phillipe IV, conspiring with Pope Clement V, arrested and dissolved the Order of Knights Templar arresting the order in France, including their Grand Master Jacques de Molay. The arrest was founded on accusations and scandalous, perverse rumours about them . After interrogations and likely coerced confessions (remember this was the era of inquisitions), de Molay confesed only to "denying Christ and trampling on the Cross", statements he was forced to repeat in public for the humiliation of the noble order. De Molay and his command, languishing in prison for 7 years, to be given life sentences in 1314. Both Philip and Clement V died before the year was out. Masonic Secrets: The Secret Handshake, Secret Word, Secret High Sign, and the Secret Nature of Freemasonry. 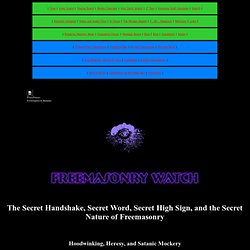 (Strikes his gavel three times.) WM: Brother ______, if you are still willing to take the Obligation, say "I", repeat your name in full, and repeat after me. Candidate: I, _____ ______, of my own free will and accord, in the presence of Almighty God and this Worshipful Lodge of Master Masons, erected to Him and dedicated to the memory of the Holy Saints John, do hereby and hereon solemnly and sincerely promise and swear that I will keep and conceal and never reveal any of the secrets belonging to the Degree of Master Mason, which I have received, am about to receive, or may be hereafter instructed in, to any person unless it shall be to a worthy Brother Master Mason, or within the body of a just and duly constituted Lodge of such, and not unto him or them until by due trial, strict examination, or lawful Masonic information, I shall have found him or them justly entitled to receive the same.