Trump's meltdown with WH Correspondent's Dinner as cover-Up for 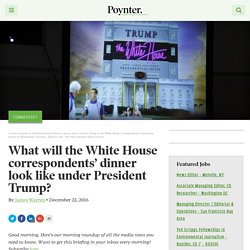 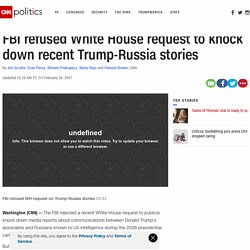 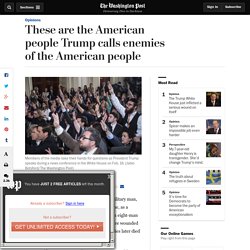 The second time, as a 22-year-old Marine corporal in 2010, he led an eight-man infantry team into combat. Two of his men were wounded by enemy sniper fire, and one of his best buddies later died in combat. Now President Trump says Thomas is an enemy of the American people. Thomas, a Pentagon correspondent for The Post, was so labeled, along with everybody else in the media, by the commander in chief on Friday. Key moments from @POTUS' speech at #CPAC.

Definition of Gaggle by Merriam-Webster. The BBC's response to being barred, along with other selected media, from today's White House press briefing. White House blocks CNN, other news organizations from press briefing - Feb. 24, 2017. The decision struck veteran White House journalists as unprecedented in the modern era, and escalated tensions in the already fraught relationship between the Trump administration and the press. 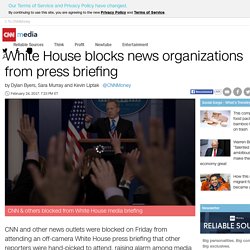 The New York Times, the Los Angeles Times, Politico, BuzzFeed, the BBC and the Guardian were also among those excluded from the meeting, which was held in White House press secretary Sean Spicer's office. The meeting, which is known as a gaggle, was held in lieu of the daily televised Q-and-A session in the White House briefing room. The WHCA board is protesting strongly against how today's gaggle is being handled by the White House. We ... 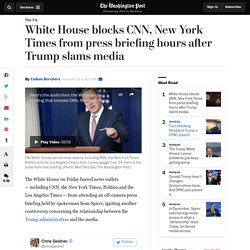 Here is the audio from that briefing. (The Washington Post) White House blocks CNN, New York Times from press briefing hours after Trump slams media. EVERY real news organization should boycott his next public press briefing next week. Let him lie to an empty room. Trump noemt New York Times en CNN 'gevaar voor ons land'. Certain media outlets were blocked from covering Sean Spicer's gaggle today. Here is the @whca's response. □ Here's audio of what @seanspicer said at a press gaggle where certain media outlets were blocked from attending. The WH claim that this was a "pool" is bogus. It was targeted and punitive. This is slippery authoritarian slope. Places where the BBC has been banned: North Korea, Zimbabwe, Myanmar, Uzbekistan, Rwanda, China and the White House. "The president's real troubles again today were not with the media, but with the facts" -@ScottPelley #RealReporting.

So here's the deal, America. Somebody is knowingly lying to you. It's either the ENTIRE national media, or one guy who's president. This is a moment of truth for the American press.They should have the decency and solidarity to stand with @nytimes @latimes et al & BOYCOTT. A Timeline Of Trump’s Relationship With The Press. A Timeline Of Trump’s Relationship With The Press. President Trump routinely insists that he is treated unfairly by the press, while many in the news industry have openly expressed how difficult it can be to report on him in today’s chaotic media environment. 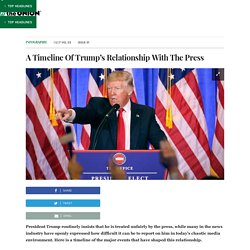 Here is a timeline of the major events that have shaped this relationship. White House bars Daily News, multiple outlets from press briefing. WASHINGTON - The White House ramped up its war against the press Friday, barring multiple outlets including the Daily News from asking questions of press secretary Sean Spicer. 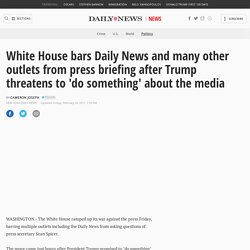 The move came just hours after President Trump promised to "do something" about the "fake news" during a speech to the Conservative Political Action Conference — and after Spicer angrily scolded reporters Friday morning for recent coverage of the FBI's reported investigation of ties between Russia and Trump's team. It seemed to be a calculated decision, possibly aimed at getting reporters to focus on inside-the-Beltway stories about the White House blocking access and playing games rather than bigger stories on what major actions the Trump administration is doing. .@realDonaldTrump's attack on the press is an attack on democracy. #ProtectTheTruth. Trump: "Many of our greatest presidents fought with the media." True, but not like this...

NEW: Uses Lenin's phrase "Enemy of the People!" Tonight attacks peaceful political protests. Trump v. Bill Of Rights. The war on the media is only beginning. And it's going to get ugly. This needs to become an activism rallying point. President Trump: "A few days ago I called the fake news the enemy of the people. The reporting angle needs to be that Trump is SPECIFICALLY excluding news orgs that have broken news on his ties to Russia. Clear motive. If media stopped attending White House press briefings and reporting nothingburgers from there, Spicer would have to take questions from: New York Times ad seeks the truth during the Oscars - Feb. 23, 2017. The ad begins with voices saying, "The truth is our nation is more divided than ever," with those words spelled out against a white backdrop. 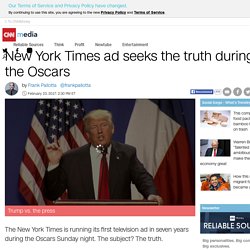 The phrase then changes to "The truth is alternative facts are lies. " The ad repeats different versions of the "The truth is... " as the voices speed up and get louder. The WHCA board is protesting strongly against how today's gaggle is being handled by the White House. We ... This is one reason why WHCA presidents are so reluctant to shake up the dinner. ...protesting with a press release isn't an actual protest. Do more, do better. Who is (and isn’t) ditching the WHCA dinner – Poynter. To go or not to go? 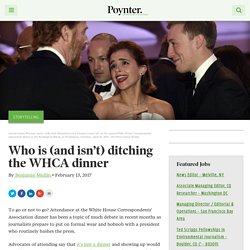 Attendance at the White House Correspondents' Association dinner has been a topic of much debate in recent months as journalists prepare to put on formal wear and hobnob with a president who routinely bashes the press. Advocates of attending say that it's just a dinner and showing up would provide some much needed comity. Others say it's a chance to celebrate journalism during a difficult period for the press. Those who are against it have several reasons: the Trump administration's hostility to the press; the unsavory optics of journalists hobnobbing with their sources; the dinner's increasingly stingy scholarship program. Worried About Trump Attending the WHCA Dinner? You Shouldn't Go Anyway! Donald Trump’s election is “raising questions and some fears” among members of the White House Correspondents’ Association, who worry how the president-elect may approach their annual dinner. 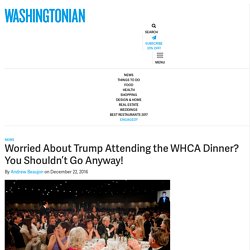 “Will he come? Ask for money to go a charity? Threaten not coming? Or does he see it as a high-profile event, drawing more attention to it?” Trump Ruled the Tabloid Media. Washington Is a Different Story. Trump's Fraught Relations With the Media - Video. Outstanding in every way. Trump administration sought to enlist intelligence officials, key lawmakers to counter Russia stories. The Trump administration has enlisted senior members of the intelligence community and Congress in efforts to counter news stories about Trump associates’ ties to Russia, a politically charged issue that has been under investigation by the FBI as well as lawmakers now defending the White House.

Acting at the behest of the White House, the officials made calls to news organizations last week in attempts to challenge stories about alleged contacts between members of President Trump’s campaign team and Russian intelligence operatives, U.S. officials said. The calls were orchestrated by the White House after unsuccessful attempts by the administration to get senior FBI officials to speak with news organizations and dispute the accuracy of stories on the alleged contacts with Russia. world national-security. Huge moment. Darrell Issa calls for Sessions to recuse himself & a special prosecutor to investigate Trump/Russia.

Press pool left in darkness as Trump dines at his hotel. Exclusive: Bloomberg cancels WHCA dinner afterparty - Axios. Studios today account for less than 10% of their parent companies' profits, per Vanity Fair, and that number is expected to drop to around 5% by 2020. According to Variety, moviegoing audience was at its lowest levels in nearly a century last summer, with significant drop-off in millennial viewership. Why it matters: In an increasingly saturated movie marketplace, studios have become incentivized to make sequels and build on pre-existing franchises, leaving streaming companies—- like Amazon and Netflix — to make investments on boutique, and often ground-breaking films. Earlier this year, Amazon became the first streaming company to own a film nominated for an Oscar best picture with Manchester by The Sea. Winners: Amazon only launched their movies business a year ago, and this year they outbid the likes of Fox Searchlight and Universal at Sundance.

" The association looks forward to "shining a spotlight at the dinner on some of the best political journalism of the past year and recognizing the promising students who represent the next generation of our profession," he added. Tensions haven't eased much since Trump took office. .@realDonaldTrump bails on White House Correspondents' Dinner. WH Spox @SarahHuckabee on Trump's "no" to WHCA dinner: "If a girl scout egged your house, would you buy cookies from her?" @ThisWeekABC. "This campaign against the media is a real threat to American democracy," @Will_Bunch tells @brianstelter. This one is important. A pattern: after new reports about Russia come Trump's attacks on the media.