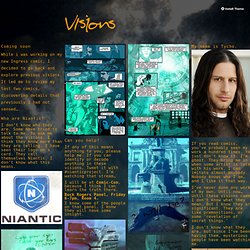 It led me to revise my last two comics, discovering details that previously I had not sensed…. My name is Tycho. If you read comics, you’ve probably seen my work a hundred times. Who are Niantic? Mad artist YouTube. Crazy Tycho at Comic-Con 2012 Buck Rogers Panel. Investigation:timeline [Niantic Project Wiki] Investigation:characters [Niantic Project Wiki] To prevent vandalism, unregistered users cannot edit this wiki. 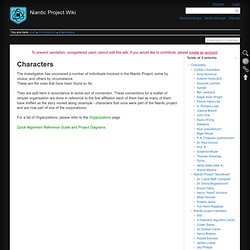 If you would like to contribute, please create an account. The investigation has uncovered a number of individuals involved in the Niantic Project, some by choice, and others by circumstance. These are the ones that have been found so far They are split here in accordance to some sort of connection. These connections for a matter of simpler organisation are done in reference to the first affiliation each of them had as many of them have shifted as the story moved along (example - characters that once were part of the Niantic project and are now part of one of the corporations) For a list of Organizations, please refer to the Organizations page. Quick Alignment Reference Guide and Project Diagrams . Civilian Characters Andy Nominus Relevance: Screenwriter for the movie project on the Niantic Calamity.

Antonin Hollis M.D. The Niantic Project. Google, This Is Getting Pretty Weird [The Niantic Project] : technology. Map Classified. NianticProject youtube channel. Ingress It's time to move. Ingress google play. ARGnet: Google’s Niantic Project Hints at Smartphone-Fueled Portals. Comic-Con has served as the launch platform for more than a few alternate reality games in the past. 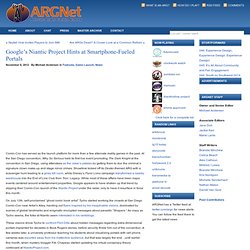 At the San Diego convention, Why So Serious held its first live event promoting The Dark Knight at the convention in San Diego, using attendees as the Joker’s patsies by getting them to don the criminal’s signature clown make-up and stage minor crimes. Showtime kicked off its Dexter-themed ARG with a scavenger hunt leading to a grisly kill room, while Disney’s Flynn Lives campaign transformed a nearby warehouse into the End of Line Club from Tron: Legacy. While most of these affairs have been major events centered around entertainment properties, Google appears to have shaken up that trend by slipping their Comic-Con launch of the Niantic Project under the radar, only to have it resurface in force this month. Whimsically titled “The Sphere of Weirdness,” Chapeau’s corkboard provides a daily snapshot of the investigation into otherworldy portals. 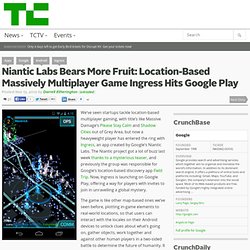 The Niantic project got a lot of buzz last week thanks to a mysterious teaser, and previously the group was responsible for Google’s location-based discovery app Field Trip. Now, Ingress is launching on Google Play, offering a way for players with invites to join in unravelling a global mystery. The game is like other map-based ones we’ve seen before, plotting in-game elements to real-world locations, so that users can interact with the locales on their Android devices to unlock clues about what’s going on, gather objects, work together and against other human players in a two-sided battle to determine the future of humanity. Google Launches Mobile Game You Play in Real Life. Google's smartphone app team Niantic Labs has released a new multi-player gaming platform that turns your real-world location into a virtual world. 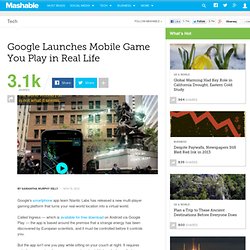 Called Ingress — which is available for free download on Android via Google Play — the app is based around the premise that a strange energy has been discovered by European scientists, and it must be controlled before it controls you. But the app isn't one you play while sitting on your couch at night. It requires actual movement and encourages you to get outside to unlock new features, weapons and adventures. For example, to control and capture things called "portals" — which spew matter from creative places such as museums and libraries — you have to go there. Once you connect three portals, you form a region and claim a territory. This means if you are in Times Square, the app's built-in scatter map technology knows where you are and adds a virtual layer to it.

Could the blending of real and virtual worlds be the future of gaming? Inside Ingress, Google's new augmented-reality game. Google ARG Hints at Niantic Labs Conspiracy. This September, Google’s Niantic Labs launched the Field Trip app as its first product, offering a method of passively delivering location-specific content to mobile devices. 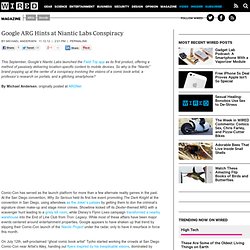 So why is the “Niantic” brand popping up at the center of a conspiracy involving the visions of a comic book artist, a professor’s research on portals, and a glitching smartphone? By Michael Andersen, originally posted at ARGNet. Field Trip. J.J. Abrams. J.J. 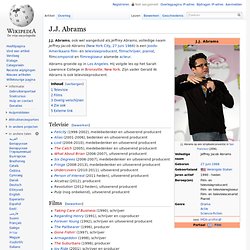 Early critical reception of the first season was lukewarm but became more favorable in subsequent seasons, when the series began to explore its mythology, including parallel universes and alternate timelines. The show, as well as the cast and crew, has been nominated for many major awards. Despite its move to the "Friday night death slot" and low ratings, the series has received a cult following. It has also spawned two six-part comic book series, an alternate reality game, and three novels. The producers were strongly interested in "world building", and the parallel universe allowed them to create a very similar world with a large amount of detail to fill in the texture of the world. A parallel universe also allowed them to show "how small choices that you make define you as a person and can change your life in large ways down the line," according to co-director Jeff Pinkner.[18] However, the producers also realized the concept of the parallel universe could be confusing to viewers.