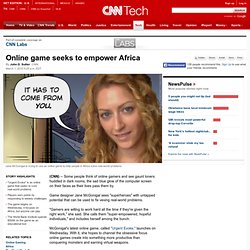 "Urgent Evoke" is an online game that seeks to cure real-world problems Players earn points by responding to weekly challenges The game begins on Wednesday; it focuses on Africa, but anyone can play The World Bank Institute spends $500K on the game as an educational tool (CNN) -- Some people think of online gamers and see gaunt loners huddled in dark rooms, the sad blue glow of the computer screen on their faces as their lives pass them by. Game designer Jane McGonigal sees "superheroes" with untapped potential that can be used to fix vexing real-world problems. "Gamers are willing to work hard all the time if they're given the right work," she said.

She calls them "super-empowered, hopeful individuals," and includes herself among the bunch. McGonigal's latest online game, called "Urgent Evoke," launches on Wednesday. Play a game, get a job. Urgent Evoke - A crash course in changing the world.

Over the past six months Posterous has steadily added nearly a dozen innovative features to its publishing platform, including static page support, comment moderation, custom domains, and a media sharing service for Twitter. And it’s no secret that Posterous is hoping to be the go-to simple everyday posting platform for consumers. Today, in its quest for world domination, the startup is unveiling a massive switching initiative to help users transfer all content from other posting and blogging sites over to Posterous. For the next 15 days, Posterous will announce a different service daily that will allow you to transfer your account, blog, videos, images and more over to the simple blogging site for free. First up: Ning. The switch over times will vary based upon size of site that is being converted, says co-founder Sachin Agarwal. Ning Partners With Pearson To Sponsor Free Network Access For Ed.

When Ning shuttered its free service for creating social networks back in April, educators and schools who were using the platform expresses their concern at the company’s decision to include educations networks created by schools and colleges in this group. When Ning eventually rolled out its premium pricing structure in May, the company announced that it had partnered with an education company to sponsor networks for primary and secondary educators but didn’t reveal the name of the sponsor.

Today, Ning is announcing that Pearson, a education-focused publishing company, is sponsoring network costs for Ning Mini platforms for educators come July. Ning says the partnership will extend for three years. Financial terms of the deal were not disclosed. Ning.com currently hosts 6,500 K-12 and 2,100 Higher Ed social networks, and range from platforms for teachers, individual schools and classes to alumni groups.

For Ning, it’s clear that educators and their networks are a priority. Online game seeks to empower Africa. McGonical looking back on Evoke. WhatHappens Next? To Be Continued … Posted by Alchemy on 20 May under News Season One of EVOKE is over, but the EVOKE Network lives on. 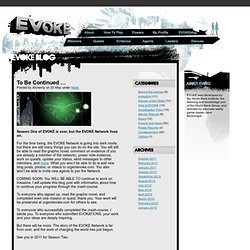 For the time being, the EVOKE Network is going into dark mode, but there are still many things you can do on the site. You will still be able to read the graphic novel, comment on evidence (if you are already a member of the network), power vote evidence, work on quests, update your status, send messages to other members, and more. What you won’t be able to do is add new blog posts, photos, or videos to urgentevoke.com. You also won’t be able to invite new agents to join the Network. COMING SOON: You WILL BE ABLE TO continue to work on missions.

To everyone who signed up, read the graphic novel, and completed even one mission or quest, thank you. To everyone who successfully completed the crash-course, I salute you. But there will be more. See you in 2011 for Season Two.

Misc: to be reordered