This isn't a game! So, I noticed the first response a la "People are dying from hunger in the world, and you dare to call this a game?! 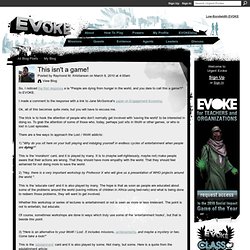 " to EVOKE. Ok, all of this becomes quite meta, but you will have to excuse me. The trick is to hook the attention of people who don't normally get involved with 'saving the world' to be interested in doing so. To grab the attention of some of those who, today, perhaps just sits in WoW or other games, or who is lost in Lost episodes.

There are a few ways to approach the Lost / WoW addicts: 1) "Why do you sit here on your butt playing and indulging yourself in endless cycles of entertainment when people are dying? " This is the 'moralism' card, and it is played by many. 2) "Hey, there is a very important workshop by Professor X who will give us a presentation of WHO projects around the world. ". This is the 'educate card' and it is also played by many. Whether this workshop or series of lectures is entertainment or not is seen as more or less irrelevant. So what do you think? Lets evoke flashmobs in gameworlds EVOKATIO. @avantgame @rhawkins @writerguygames #CovertOps = Sign up | Login Welcome Map Feed Details Download Help About Blog Back Photo World name @avantgame @rhawkins @writerguygames #CovertOps = author WhatsInTheBox created on 15 May 2010 at 16:51 posted in World , play , GloNet -zero bandwidth/infinite latency- , こんにちは。 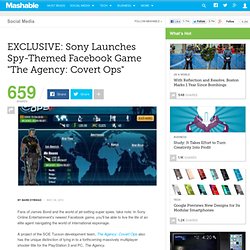 A project of the SOE Tucson development team, The Agency: Covert Ops also has the unique distinction of tying in to a forthcoming massively multiplayer shooter title for the PlayStation 3 and PC, The Agency. In the company's first social media action game, you'll find yourself running covert missions, building a network of operatives, customizing your character and your agency's headquarters, mastering highly replayable mini-games, upgrading your agent with gadgets and weapons and more. You can enlist a mix of stylish non-player characters and your real Facebook friends to engage in group missions, and share accomplishments and creative avatars and HQs on your Facebook wall. The Agency: Covert Ops Trailer About The Agency: Covert Ops — Developer Interview. The Agency GameOverview. Type Exception report message description The server encountered an internal error () that prevented it from fulfilling this request. exception note The full stack trace of the root cause is available in the Apache Tomcat/5.5.33 logs.