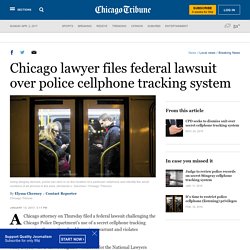 Jerry Boyle, who is also a longtime volunteer for the National Lawyers Guild, brought the case after police intercepted information from his cellphone at a Black Lives Matter protest for Martin Luther King Jr. Day in 2015 on the West Side, according to the lawsuit. As a volunteer, Boyle frequently attends protests to monitor police activity and to offer legal services to anyone who may be arrested.

"The people of Chicago should be able to exercise their First Amendment rights to freedom of speech, association and assembly without being spied upon by police," Boyle said in a news release. "Government spying on its citizens without appropriate judicial oversight is inconsistent with the freedoms guaranteed by the Constitution. " Cellular Shutdown Raises Questions Of Free Speech. 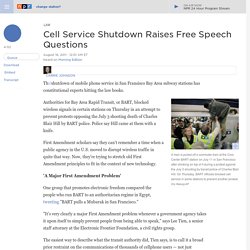 A man is pulled off a commuter train at the Civic Center BART station on July 11 in San Francisco after climbing on top of it during a protest against the July 3 shooting by transit police of Charles Blair Hill. On Thursday, BART officials blocked cell service in some stations to prevent another protest. Eric Risberg/AP hide caption. U.S. court says 'Liking' something on Facebook is free speech.

Upper Perk student fights expulsion after posting mash-up video some took as threat. A 15-year-old boy whose mashup video caused the Upper Perkiomen School District to cancel classes one day last month will not be permitted to return to school while his federal lawsuit against the district plays out. 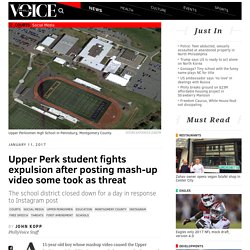 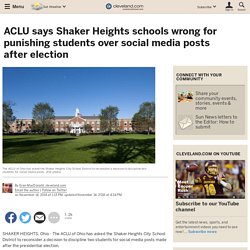 The district disciplined the students Thursday for social media posts showing another student making derogatory statements about black Americans, the ACLU said in a statement. Superintendent Dr. Gregory C. Hutchings Jr. called the incident "unacceptable" in a statement posted on the district's website. Student athletes’ use of social media can no longer be limited. At the end of 2016, the National Labor Relations Board ruled that the 17 private colleges competing in the FBS can no longer limit athletes’ use of social media. 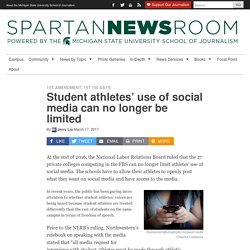 The schools have to allow their athletes to openly post what they want on social media and have access to the media. Jhaymesisviphotography licensed under Creative Commons In recent years, the public has been paying more attention to whether student athletes’ voices are being heard because student athletes are treated differently than the rest of students on the same campus in terms of freedom of speech. Prior to the NLRB’s ruling, Northwestern’s rulebook on speaking with the media stated that “all media request for interviews with student athletes must be made through athletic communications.” Amazon Is Convinced Alexa Has First Amendment Rights. Invoking AI Rights An Amazon Echo is being viewed as a key piece of evidence in an ongoing murder investigation in Arkansas dating back to 2015. 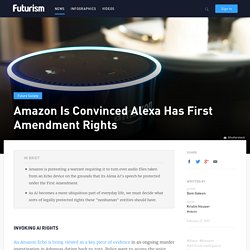 Police want to access the voice recordings from the device’s built-in virtual assistant Alexa. Do Sex Offenders Have Free Speech Rights? President Donald Trump shakes hands with Supreme Court Chief Justice John Roberts as he arrives on Capitol Hill in Washington on Feb. 28, 2017, for his address to a joint session of Congress. 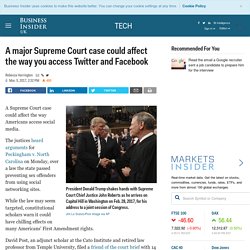 Jim Lo Scalzo/Pool Image via AP A Supreme Court case could affect the way Americans access social media. The justices heard arguments for Peckingham v. North Carolina on Monday, over a law the state passed preventing sex offenders from using social networking sites. While the law may seem targeted, constitutional scholars warn it could have chilling effects on many Americans' First Amendment rights. Lawsuit seeks data over searches of electronics at border. WASHINGTON — A group of First Amendment attorneys sued the Trump administration on Monday over access to data showing how often U.S. citizens and visitors had their electronic devices searched and the contents catalogued at American border crossings. 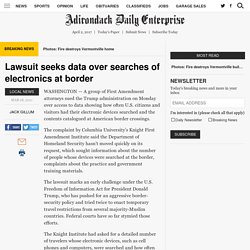 The complaint by Columbia University’s Knight First Amendment Institute said the Department of Homeland Security hasn’t moved quickly on its request, which sought information about the number of people whose devices were searched at the border, complaints about the practice and government training materials. The lawsuit marks an early challenge under the U.S. Freedom of Information Act for President Donald Trump, who has pushed for an aggressive border-security policy and tried twice to enact temporary travel restrictions from several majority-Muslim countries. Federal courts have so far stymied those efforts.

Kurt Eichenwald Case: Texas Grand Jury Says a GIF Is a 'Deadly Weapon' A Texas grand jury has decided that a GIF can be just as deadly as a gun or knife. 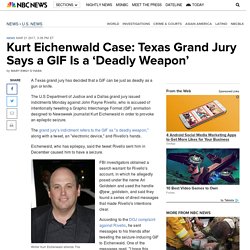 The U.S Department of Justice and a Dallas grand jury issued indictments Monday against John Rayne Rivello, who is accused of intentionally tweeting a Graphic Interchange Format (GIF) animation designed to Newsweek journalist Kurt Eichenwald in order to provoke an epileptic seizure. The grand jury's indictment refers to the GIF as "a deadly weapon," along with a tweet, an "electronic device," and Rivello's hands.

Eichenwald, who has epilepsy, said the tweet Rivello sent him in December caused him to have a seizure.