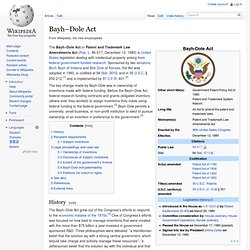 L. 96-517, December 12, 1980) is United States legislation dealing with intellectual property arising from federal government-funded research. Sponsored by two senators, Birch Bayh of Indiana and Bob Dole of Kansas, the Act was adopted in 1980, is codified at 94 Stat. 3015, and in 35 U.S.C. § 200-212,[1] and is implemented by 37 C.F.R. 401.[2] The key change made by Bayh-Dole was in ownership of inventions made with federal funding. Before the Bayh–Dole Act, federal research funding contracts and grants obligated inventors (where ever they worked) to assign inventions they made using federal funding to the federal government.[3] Bayh-Dole permits a university, small business, or non-profit institution to elect to pursue ownership of an invention in preference to the government.[4] History[edit] Recipient requirements[edit] Certain additional requirements apply to nonprofit organizations only.

Subject inventions[edit] Patent. A patent (/ˈpætənt/ or /ˈpeɪtənt/) is a set of exclusive rights granted by a sovereign state to an inventor or assignee for a limited period of time in exchange for detailed public disclosure of an invention. 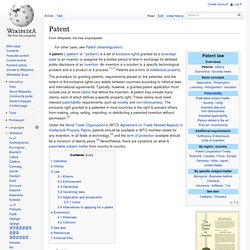 An invention is a solution to a specific technological problem and is a product or a process.[1]:17 Patents are a form of intellectual property. Under the World Trade Organization's (WTO) Agreement on Trade-Related Aspects of Intellectual Property Rights, patents should be available in WTO member states for any invention, in all fields of technology,[3] and the term of protection available should be a minimum of twenty years.[4] Nevertheless, there are variations on what is patentable subject matter from country to country. Definition[edit] The word patent originates from the Latin patere, which means "to lay open" (i.e., to make available for public inspection). History[edit] U.S. patents granted, 1790–2010.[11] Law[edit] Effects[edit] Enforcement[edit] Review: “How Economics Shapes Science,” by Paula Stephan. "How Economics Shapes Science" I recently finished a very interesting and useful book entitled, “How Economics Shapes Science,” written by the economist Paula Stephan (Professor of Economics, Georgia State University and a member of the National Bureau of Economic Research). 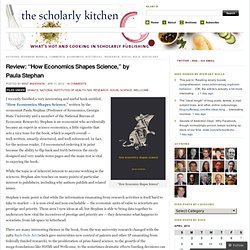 Stephan is an economist who accidentally became an expert in science economics, a little vignette that sets a nice tone for the book, which is superb overall — well-written, smartly structured, and well-referenced. In fact, for the serious reader, I’d recommend ordering it in print because the ability to flip back and forth between the nicely designed and very usable notes pages and the main text is vital to enjoying the book. While the topic is of inherent interest to anyone working in the sciences, Stephan also touches on many points of particular interest to publishers, including why authors publish and related issues. (Editor’s note: An interview with the author was published with this review.) Gene cartels: biotech patents in the age of free trade - Luigi Palombi.

Monsanto. Quebec's 'truncheon law' rebounds as student strike spreads. At a tiny church tucked away in a working-class neighbourhood in Montreal's east end, Quebec's new outlaws gathered on Sunday for a day of deliberations. 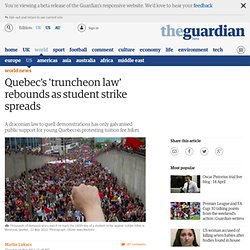 Aged mostly between 18 and 22, their membership in a progressive student union has made them a target of government scorn and scrutiny. And they have been branded a menace to society because of their weapons: ideas of social justice and equal opportunity in education, alongside the ability to persuade hundreds of thousands to join them in the streets. Under a draconian law passed by the Quebec government on Friday, their very meeting could be considered a criminal act.

Law 78 – unprecedented in recent Canadian history – is the latest, most desperate manoeuvre of a provincial government that is afraid it has lost control over a conflict that began as a student strike against tuition hikes but has since spread into a protest movement with wide-ranging social and environmental demands. Public-Private Partnerships: Goods and the Structure of Contracts - Annual Review of Resource Economics, 1(1):75. EU-wide patent regime at hand. 10 december 2012 - Patenting in the EU is four times more expensive than in other developed economies, but after more than 30 years, a new agreement is at hand. 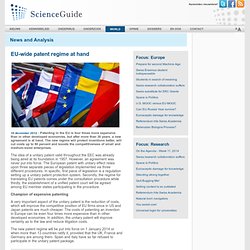 The new regime will protect inventions better, will cut costs up to 80 percent and boosts the competitiveness of small and medium-sized enterprises. In Standing Up for Big Ag, Are Universities Undercutting Their Own Researchers? - Bottom Line. In a case before the U.S. 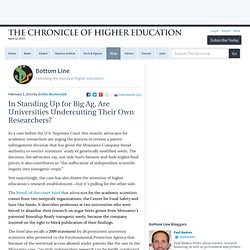 Supreme Court this month, advocates for academic researchers are urging the justices to reverse a patent-infringement decision that has given the Monsanto Company broad authority to restrict scientists’ study of genetically modified seeds. The decision, the advocates say, not only hurts farmers and fuels higher food prices; it also contributes to “the suffocation of independent scientific inquiry into transgenic crops.”

Not surprisingly, the case has also drawn the attention of higher education’s research establishment—but it’s pulling for the other side. The friend-of-the-court brief that advocates for the academic scientists comes from two nonprofit organizations, the Center for Food Safety and Save Our Seeds. @timoreilly This paper on abolishing the patent system, by two Fed economists, is truly remarkable in its comprehensive insight. This site uses cookies to improve performance. 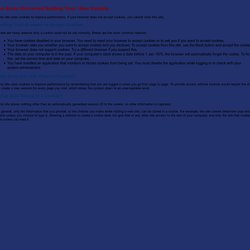 If your browser does not accept cookies, you cannot view this site. Setting Your Browser to Accept Cookies There are many reasons why a cookie could not be set correctly. Below are the most common reasons: You have cookies disabled in your browser. Why Does this Site Require Cookies? Woede om patent genetisch gemanipuleerde aap - Nieuws. Fast Track Competition. UCLA tells professors not to apply for major new pharmaceutical grant. These days many research universities are constantly looking for new grant competitions and encouraging their faculty members to apply. 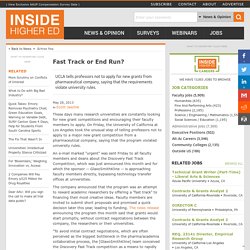 On Friday, the University of California at Los Angeles took the unusual step of telling professors not to apply to a major new grant competition from a pharmaceutical company, saying that the program violated university rules. An e-mail marked "urgent" was sent Friday to all faculty members and deans about the Discovery Fast Track Competition, which was just announced this month and for which the sponsor -- GlaxoSmithKline -- is approaching faculty members directly, bypassing technology transfer offices at universities. The company announced that the program was an attempt to reward academic researchers by offering a "fast track" to financing their most creative ideas. Faculty members are invited to submit short proposals and promised a quick decision later this year, leading to funding. From Novel Research to Innovative Medicines: GlaxoSmithKline Launches Discovery Fast Track Competition for Academic Researchers. 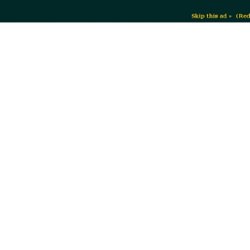 Winners of the competition will partner with investigators on GSK's Discovery Partnerships with Academia (DPAc) team with a goal of developing viable research-stage drug candidates into innovative medicines. Launched in the U.K. in late 2010, the DPAc program is a new approach to drug discovery where academic partners become core members of drug-hunting teams. GSK and the academic partner share the risk and reward of innovation, where GSK funds activities in the partner laboratories, as well as provides in-kind resources to progress a program from an idea to a candidate medicine. Public Research for Private Gain. In a unanimous vote last month, the Regents of the University of California created a corporate entity that, if spread to all UC campuses as some regents envision, promises to further privatize scientific research produced by taxpayer-funded laboratories. 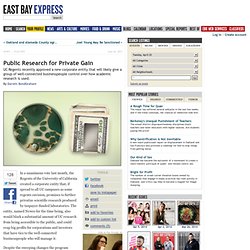 The entity, named Newco for the time being, also would block a substantial amount of UC research from being accessible to the public, and could reap big profits for corporations and investors that have ties to the well-connected businesspeople who will manage it. Despite the sweeping changes the program portends for UC, the regents' vote received virtually no press coverage. UC plans to first implement Newco at UCLA and its medical centers, but some regents, along with influential business leaders across the state, want similar entities installed at Berkeley, Davis, Santa Cruz, and other campuses. Clevers: 'Jonge onderzoekers hebben weinig aan topsectoren' Patentmuur. Corporate open source: Intellectual property and the struggle over value. BASF verkrijgt exclusieve rechten op het verhandelen van magnetocalorische materialen. CA (Cristian) Timmermann. Resource - Patenten benadelen ontwikkelings landen. Patent Monopolies - Falkvinge. When the compact cassette hit in the 1970s, – and even more so when Napster hit in the late 1990s – the copyright monopoly invaded honest people’s bedrooms.

Up until that point, it had been an esoteric concept that had only concerned lawyers in big publishing houses. When single families started getting sued by big publishing houses for the “crime” of sharing knowledge and culture, the public came into direct contact with the exclusive right construct, we know as the copyright monopoly, and started re-evaluating a lot of the things that had been taken for granted up until that point. Dutch laboratory 'delaying' MERS treatment - Middle East.