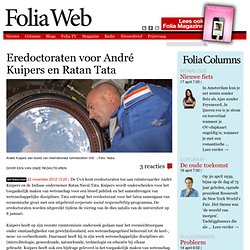 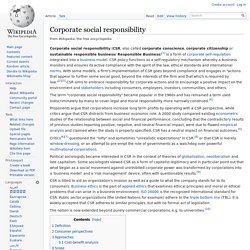 Proponents argue that corporations increase long term profits by operating with a CSR perspective, while critics argue that CSR distracts from business' economic role. A 2000 study compared existing econometric studies of the relationship between social and financial performance, concluding that the contradictory results of previous studies reporting positive, negative, and neutral financial impact, were due to flawed empirical analysis and claimed when the study is properly specified, CSR has a neutral impact on financial outcomes.[5] Critics[6][7] questioned the "lofty" and sometimes "unrealistic expectations" in CSR.[8] or that CSR is merely window-dressing, or an attempt to pre-empt the role of governments as a watchdog over powerful multinational corporations.

Definition[edit] Peter Munk in his own words: speech at the 2010 Barrick AGM. Creating Shared Value. Creating shared value (CSV) is a business concept first introduced in Harvard Business Review article Strategy & Society: The Link between Competitive Advantage and Corporate Social Responsibility.[1] The concept was further expanded in the January 2011 follow-up piece entitled "Creating Shared Value: Redefining Capitalism and the Role of the Corporation in Society".[2] Written by Michael E. 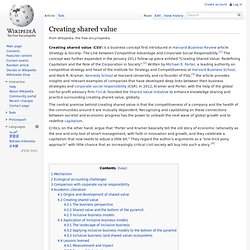 Porter, a leading authority on competitive strategy and head of the Institute for Strategy and Competitiveness at Harvard Business School, and Mark R. Kramer, Kennedy School at Harvard University and co-founder of FSG,[3] the article provides insights and relevant examples of companies that have developed deep links between their business strategies and corporate social responsibility (CSR). The central premise behind creating shared value is that the competitiveness of a company and the health of the communities around it are mutually dependent. Mechanism[edit] Academic Literature[edit] Amartya Sen: India's dirty fighter. The roses are blooming at the window in the immaculately kept gardens of Trinity College, Cambridge and Amartya Sen is comfortably ensconced in a cream armchair facing shelves of his neatly catalogued writings. 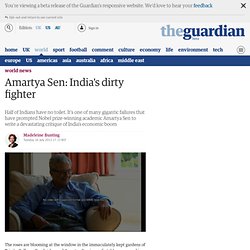 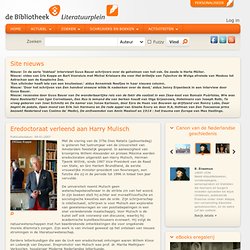 Hiero II of Syracuse. Grave monument of Hiëro II in Syracuse Hiero II (c. 308 BC – 215 BC) was the Greek Sicilian king of Syracuse from 270 to 215 BC, and the illegitimate son of a Syracusan noble, Hierocles, who claimed descent from Gelon. 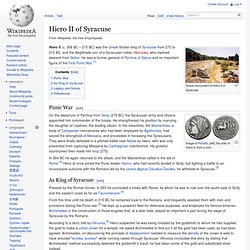 He was a former general of Pyrrhus of Epirus and an important figure of the First Punic War.[1] Archimede bain. Arkhimedes. Mark Salata: How taking a bath led to Archimedes' principle. Vitruvius on Architecture — Book IX. Introduction 1. 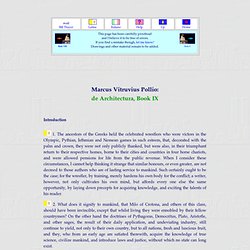 The ancestors of the Greeks held the celebrated wrestlers who were victors in the Olympic, Pythian, Isthmian and Nemean games in such esteem, that, decorated with the palm and crown, they were not only publicly thanked, but were also, in their triumphant return to their respective homes, borne to their cities and countries in four horse chariots, and were allowed pensions for life from the public revenue. When I consider these circumstances, I cannot help thinking it strange that similar honours, or even greater, are not decreed to those authors who are of lasting service to mankind. Such certainly ought to be the case; for the wrestler, by training, merely hardens his own body for the conflict; a writer, however, not only cultivates his own mind, but affords every one else the same opportunity, by laying down precepts for acquiring knowledge, and exciting the talents of his reader. 2. 3. 5. 6. 8. 9. 11. 13. 14. 15. 16. 17. 18. Chapter 1.