Freedom of association. Freedom of association is the right to join or leave groups of a person's own choosing, and for the group to take collective action to pursue the interests of members.[1] It is both an individual right and a collective right, guaranteed by all modern and democratic legal systems, including the United States Bill of Rights, article 11 of the European Convention on Human Rights and the Canadian Charter of Rights and Freedoms, and international law, including articles 20 and 23 of the Universal Declaration of Human Rights, and Conventions 87 and 98 of the International Labour Organization. 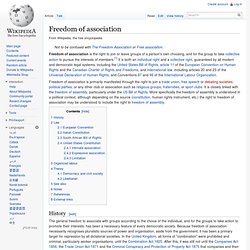 Freedom of association is primarily manifested through the right to join a trade union, free speech or debating societies, political parties, or any other club or association such as religious groups, fraternities, or sport clubs. It is closely linked with the freedom of assembly, particularly under the US Bill of Rights. History[edit] Law[edit] European Convention[edit] Article 11 ECHR.

NYPD promised to remove the barricades surrounding the Wall Street bull by Monday. Wall Street’s bull is about to break free from his corral. 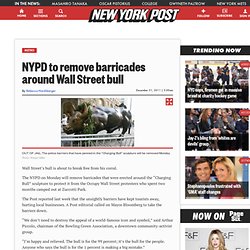 The NYPD on Monday will remove barricades that were erected around the “Charging Bull” sculpture to protect it from the Occupy Wall Street protesters who spent two months camped out at Zuccotti Park. The Post reported last week that the unsightly barriers have kept tourists away, hurting local businesses. A Post editorial called on Mayor Bloomberg to take the barriers down. “We don’t need to destroy the appeal of a world-famous icon and symbol,” said Arthur Piccolo, chairman of the Bowling Green Association, a downtown community-activist group. “I’m happy and relieved. The bronze bull was penned in when the Occupy Wall Street protest began in mid-September — and the barricades have remained in place for more than a month since the NYPD cleared out Zuccotti Park. 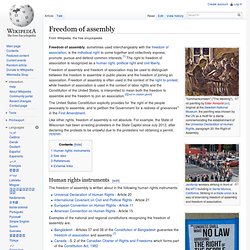 UKuncutter arrested for holding a banner. Blogger and UKuncut protester Alasdair Thompson was arrested this morning by Lothian & Borders Police for merely displaying an anti-cuts banner at a BHS store in Edinburgh’s Rose Street. 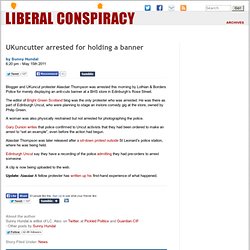 The editor of Bright Green Scotland blog was the only protester who was arrested. He was there as part of Edinburgh Uncut, who were planning to stage an instore comedy gig at the store, owned by Philip Green. A woman was also physically restrained but not arrested for photographing the police. Gary Dunion writes that police confirmed to Uncut activists that they had been ordered to make an arrest to “set an example”, even before the action had begun.

Alasdair Thompson was later released after a sit-down protest outside St Leonard’s police station, where he was being held. Edinburgh Uncut say they have a recording of the police admitting they had pre-orders to arrest someone. A clip is now being uploaded to the web. Update: Alasdair A fellow protester has written up his first-hand experience of what happened. EFF: Unitarian Church, Gun Groups Join EFF to Sue NSA Over Illegal Surveillance. San Francisco - Nineteen organizations including Unitarian church groups, gun ownership advocates, and a broad coalition of membership and political advocacy organizations filed suit against the National Security Agency (NSA) today for violating their First Amendment right of association by illegally collecting their call records. 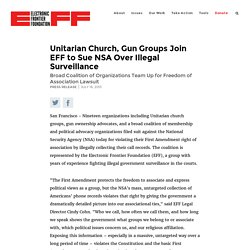 The coalition is represented by the Electronic Frontier Foundation (EFF), a group with years of experience fighting illegal government surveillance in the courts. "The First Amendment protects the freedom to associate and express political views as a group, but the NSA's mass, untargeted collection of Americans' phone records violates that right by giving the government a dramatically detailed picture into our associational ties," said EFF Legal Director Cindy Cohn. "Who we call, how often we call them, and how long we speak shows the government what groups we belong to or associate with, which political issues concern us, and our religious affiliation. 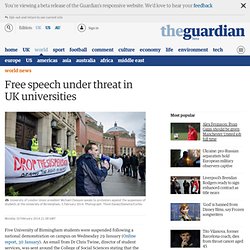 An email from Dr Chris Twine, director of student services, was sent around the College of Social Sciences stating that the five students "have been suspended from study and barred from University premises with immediate effect" and are "not to be allowed access to any teaching or learning activities". These suspensions follow a national meeting and demonstration at the university, which culminated in an occupation of the Aston Webb's Great Hall. When the students attempted to peacefully leave the hall, they were kettled by police officers and university security. The five were held for more than four hours, before being released, one by one, to be questioned by the police at 6pm that evening. Along with eight other protesters they were held for more than 27 hours in Birmingham police stations.