Cambridge PET Reading Test part 3. Free Practice for the Preliminary English Test. In this part of the exam you need to read a long text and answer 10 True/False questions. Explore the Villages around Hartbridge Many visitors come to Hartbridge to see the wonderful art galleries and museums, the beautiful buildings and the fantastic parks. Few people go outside the city, and so they miss out on experiencing the scenery and the fascinating history of this beautiful area. This brochure will tell you what you can see if you take a short bus ride out of the city. Camberwell The historic village of Camberwell was once the home of the wealthy Hugo family. They lived in a huge country house, Camberwell Court, and owned all the land in the area. Michael And His Stomach - True/False Questions. Read about Michael and his problems, then answer the True/False questions. 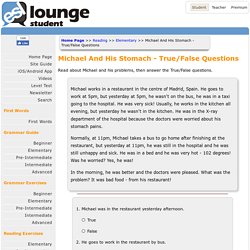 Michael works in a restaurant in the centre of Madrid, Spain. He goes to work at 5pm, but yesterday at 5pm, he wasn't on the bus, he was in a taxi going to the hospital. He was very sick! British worst at learning languages. Languages How many languages can you speak? 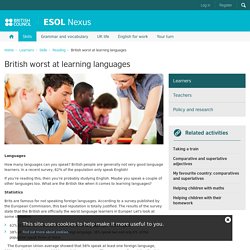 British people are generally not very good language learners. In a recent survey, 62% of the population only speak English! If you’re reading this, then you’re probably studying English. Maybe you speak a couple of other languages too. Statistics. The Story of the Aral Sea. The first year of life. Elementary Reading. Read about the office and then answer the multiple choice questions. 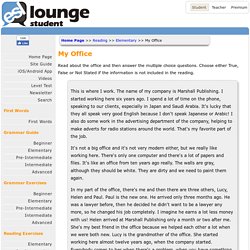 Choose either True, False or Not Stated if the information is not included in the reading. This is where I work. The name of my company is Marshall Publishing. I started working here six years ago. I spend a lot of time on the phone, speaking to our clients, especially in Japan and Saudi Arabia. It's not a big office and it's not very modern either, but we really like working here. In my part of the office, there's me and then there are three others, Lucy, Helen and Paul. 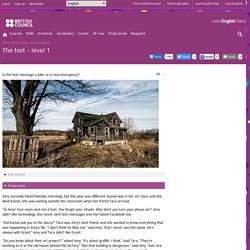 The only thing to fear is ... – level 1. No one believes me about what happened in the swimming pool. 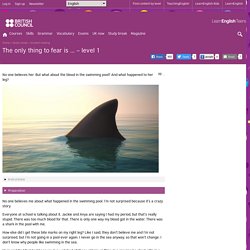 I’m not surprised because it’s a crazy story. Everyone at school is talking about it. Jackie and Anya are saying I had my period, but that’s really stupid. Rumpelstiltskin: a modern retelling – level 1. There was a long line of people outside the TV show Find A Star. 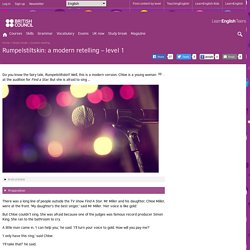 Mr Miller and his daughter, Chloe Miller, were at the front. 'My daughter's the best singer,' said Mr Miller. 'Her voice is like gold.' Mystery train – level 1. ‘The ghost train is for children!’ Said Claire. ‘People look afraid when they leave,’ said Peter. He tried to pull her to The World’s Best Ghost Train. ‘It’s fun!’ ‘They know it’s not real, so why are they afraid? Life as a YouTuber – level 1. Do funny or interesting things happen to you a lot? 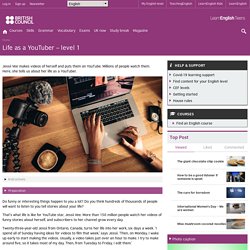 Do you think hundreds of thousands of people will want to listen to you tell stories about your life? That’s what life is like for YouTube star, Jessii Vee. More than 150 million people watch her videos of funny stories about herself, and subscribers to her channel grow every day. Twenty-three-year-old Jessii from Ontario, Canada, turns her life into her work, six days a week. ‘I spend all of Sunday having ideas for videos to film that week,’ says Jessii. Jessii also spends a few hours a week writing to her fans. Online life isn’t all good. If you want to start a YouTube channel, there are some things to think about. Jessii has some advice about what kind of videos to make. LA skaters: an interview – level 1. Monica and Carl are teenagers from Los Angeles in the United States. 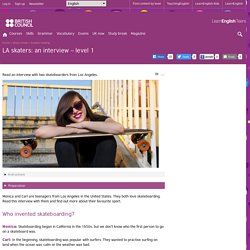 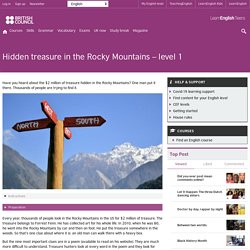 The treasure belongs to Forrest Fenn. He has collected art for his whole life. In 2010, when he was 80, he went into the Rocky Mountains by car and then on foot. Happiness – level 1. Do you know what makes you happy or do you just think you know? 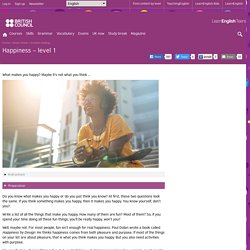 At first, these two questions look the same. If you think something makes you happy, then it makes you happy. You know yourself, don’t you? Write a list of all the things that make you happy. How many of them are fun? Well, maybe not. We usually know if something is fun, but we don’t know what brings meaning. Guess what? – level 1. 22/09/2015 22:21 … I’m afraid of the letter 'W'. … Yes, I stutter. So what? 01/03/2016 19:35 … A new boy started at school yesterday. Graffiti and street art – level 1. The story of street art Modern graffiti began in big cities in the United States in the 1970s. In New York, young people wrote their names, or 'tags', in pen on walls around the city. Cheat! – level 1. Bully – level 1. Kay got another message as she was leaving for school. Animals in the city – level 1. One night in December 2011, a bear came into the city of Vancouver in Canada. It walked through the city streets past houses, shops and offices.