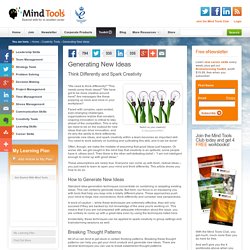 © iStockphoto/NREY "We need to think differently! " "This needs some fresh ideas! " "We have got to be more creative around here! " Faced with complex, open-ended, ever-changing challenges, organizations realize that constant, ongoing innovation is critical to stay ahead of the competition. Often, though, we make the mistake of assuming that good ideas just happen. These assumptions are rarely true. How to Generate New Ideas Standard idea-generation techniques concentrate on combining or adapting existing ideas.

A word of caution – while these techniques are extremely effective, they will only succeed if they are backed by rich knowledge of the area you're working on. Incidentally, these techniques can be applied to spark creativity in group settings and brainstorming sessions as well. Breaking Thought Patterns All of us can tend to get stuck in certain thinking patterns. Connect the Unconnected Why does this happen? Key Points. 5 Whys - Problem-Solving Skills From MindTools.com. Quickly Getting to the Root of a Problem How to use the 5 Whys technique, with James Manktelow & Amy Carlson. 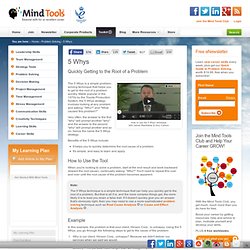 The 5 Whys is a simple problem-solving technique that helps you to get to the root of a problem quickly. Made popular in the 1970s by the Toyota Production System, the 5 Whys strategy involves looking at any problem and asking: "Why? " and "What caused this problem? " Very often, the answer to the first "why" will prompt another "why" and the answer to the second "why" will prompt another and so on; hence the name the 5 Whys strategy. Benefits of the 5 Whys include: It helps you to quickly determine the root cause of a problem.It's simple, and easy to learn and apply.

How to Use the Tool When you're looking to solve a problem, start at the end result and work backward (toward the root cause), continually asking: "Why? " Note: The 5 Whys technique is a simple technique that can help you quickly get to the root of a problem. Example Why is our client, Hinson Corp., unhappy? Key Points. Brainstorming - Brainstorming Techniques from MindTools.com. Generating Many Radical, Creative Ideas Brainstorm better with James Manktelow & Amy Carlson. 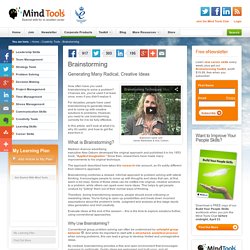 How often have you used brainstorming to solve a problem? Chances are, you've used it at least once, even if you didn't realize it. Innovation Styles = Success Booster. Generating Innovative Solutions Often the hardest part of generating new innovative solutions is knowing where and how to begin looking for them. 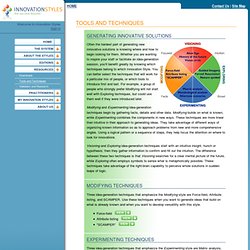 Whether you are wanting to inspire your staff or facilitate an idea-generation session, you'll benefit greatly by knowing which techniques belong to which Innovation Style. You can better select the techniques that will work for a particular mix of people, or which tools to introduce first and last. For example, a group of people who strongly prefer Modifying will not start well with Exploring techniques, but could use them well if they were introduced later. Modifying and Experimenting idea-generation techniques begin by gathering facts, details and other data. Visioning and Exploring idea-generation techniques start with an intuitive insight, hunch or hypothesis; then they gather information to confirm and fill out the intuition. Cause and Effect Analysis (Fishbone Diagrams) - from MindTools.com. Identifying the Likely Causes of Problems (Also known as Cause and Effect Diagrams, Fishbone Diagrams, Ishikawa Diagrams, Herringbone Diagrams, and Fishikawa Diagrams.) 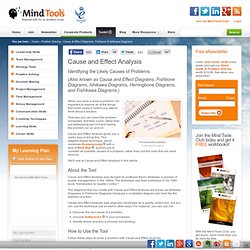 Find all possible problems. © iStockphoto/ragsac When you have a serious problem, it's important to explore all of the things that could cause it, before you start to think about a solution. That way you can solve the problem completely, first time round, rather than just addressing part of it and having the problem run on and on. Cause and Effect Analysis gives you a useful way of doing this. We'll look at Cause and Effect Analysis in this article.