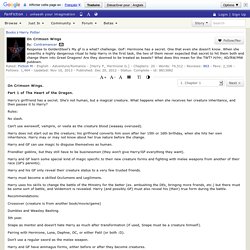 Part 1 of The Heart of the Dragon. Harry's girlfriend has a secret. She's not human, but a magical creature. What happens when she receives her creature inheritance, and then passes it to Harry? Rules: No slash. Can't use werewolf, vampire, or veela as the creature blood (waaaay overused). Harry does not start out as the creature; his girlfriend converts him soon after her 15th or 16th birthday, when she hits her own inheritence. Harry and GF can use magic to disguise themselves as human. Friendlier goblins, but they still have to be businessmen (they won't give Harry/GF everything they want). Harry and GF learn some special kind of magic specific to their new creature forms and fighting with melee weapons from another of their race (GF's parents). Harry and his GF only reveal their creature status to a very few trusted friends.

Harry must become a skilled Occlumens and Legilimens. Recommendations: Crossover (creature is from another book/movie/game) Dumbles and Weasley Bashing. The Thief of Hogwarts Chapter 1. The Thief of Hogwarts By Bluminous A/N: I had this idea brewing in my mind for a month, and I finally decided to put it to writing... ...and it's not a crossover. 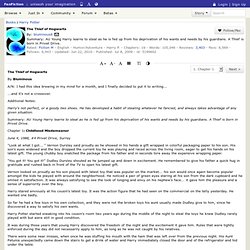 The Potter Brand Chapter 1: A Stranger Appears, a harry potter fanfic. Author's Note: This story begins on August 2, 1995, at the start of events occurring in Order of the Phoenix. 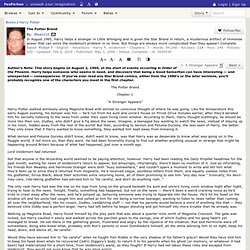 Harry helps someone who seems in need, and discovers that being a Good Samaritan can have interesting — and unexpected — consequences. If you've ever read any Star Brand comics, either from the 1980's or the later versions, you'll probably recognize one of the characters you meet in the first chapter. The Potter Brand Chapter 1 "A Stranger Appears" Harry Potter walked aimlessly along Magnolia Road with almost no conscious thought of where he was going. What Vernon and Petunia Dursley didn't know, didn't want to know, was that Harry was as desperate to know what was going on in the Muggle world, if not more so, than they were. All The Dementors of Azkaban, a harry potter fanfic. All the Dementors of Azkaban Alternate CoS: When Luna Lovegood is condemned to Azkaban prison for her part in opening the Chamber of Secrets, Harry Potter is the first to protest. 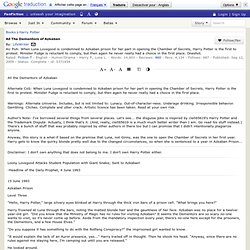 Minister Fudge is reluctant to comply, but then again he never really had a choice in the first place. Warnings: Alternate Universe. Includes, but is not limited to: Lunacy. Out-of-character-ness. Author's Note: I've borrowed several things from several places. Anyway, this story is a what-if based on the premise that Luna, not Ginny, was the one to open the Chamber of Secrets in her first year. Disclaimer: I don't own anything that does not belong to me. Loony Lovegood Attacks Student Population with Giant Snake; Sent to Azkaban!

Simply Irresistible Chapter 1. I just joined Wattpad to also put my stories up and voila, barely a week later someone else brought attention to me that my story was potentially copied not word for word this time but many situations and dialogues are word for word. 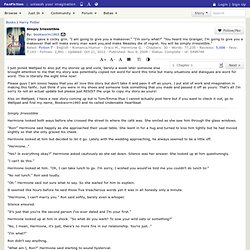 This is literally the eight time now! Please guys I am soooo happy that you all love this story but don't take it and pass it off as yours. I put alot of work and imagination in making this fanfic. Just think if you were in my shoes and someone took something that you made and passed it off as yours. That's all I'm sorry its not an actual update but please just RESIST the urge to copy my story as yours! Also on Wattpad, I have a new story coming up but is Tom/Emma thus I cannot actually post here but if you want to check it out, go toWattpad and find my name, Bookworm1993 and its called Undeniable Heartbeat. Partially Kissed Hero Chapter 1. Partially Kissed HeroChapter Oneby Lionheart Every so often the entire Harry Potter universe offends me so deeply that I just have to react by folding, spindling and mutilating it. 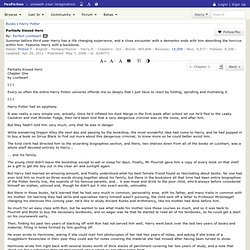 Harry Potter had an epiphany. It was really a very simple one, actually. Once he'd inflated his Aunt Marge in the first week after school let out he'd fled to the Leaky Cauldron and met Minister Fudge, then he'd been told that a very dangerous criminal was on the loose, and after him. But they hadn't told him very much, only that he was in danger. While wandering Diagon Alley the next day and passing by the bookshop, the most wonderful idea had come to Harry, and he had popped in to buy a book on Sirius Black to find out more about this dangerous criminal, to know more so he could better avoid him. The kind clerk had directed him to the wizarding biographies section, and there, two shelves down from all of the books on Lockhart, was a whole shelf devoted entirely to Harry...

Bring it on Hogwarts Chapter 1: Disciplinary Action, a harry potter fanfic. These characters and their setting are the property of J. 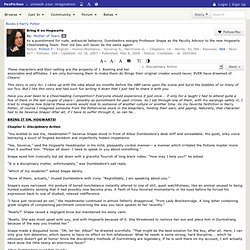 Rowling and her associates and affiliates. I am only borrowing them to make them do things their original creator would never, EVER have dreamed of. Cheers! This story is very AU. I came up with the idea about six months before the HBP came upon the scene and burst the bubbles of so many of our fics. Have you ever been to a Cheerleading Competition? Lord of Caer Azkaban Chapter 1: Inheritance. Disclaimer: I own virtually nothing in this fic, it is all owned by people with more money then me. 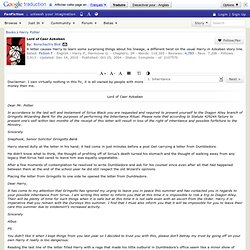 Lord of Caer Azkaban Dear Mr. Potter In accordance to the last will and testament of Sirius Black you are requested and required to present yourself to the Diagon Alley branch of Gringotts Wizarding Bank for the purposes of performing the Inheritance Ritual. Please note that according to Statute 42924A failure to present one's self within two months of the receipt of this letter will result in loss of the right of inheritance and possible forfeiture to the Ministry.

A Black Comedy Chapter 1: PROLOGUE. Disclaimer: I own nothing; it all belongs to J.K.Rowling. 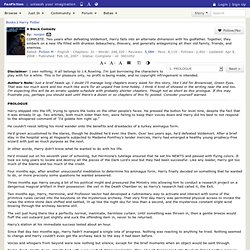 I'm just borrowing the characters to play with for a while. This is for pleasure only, no profit is being made, and no copyright infringement is intended. Author's Note: Just a brief heads up. I doubt I'll manage long chapters every week for this story, like I did for Browncoat, Green Eyes. That was too much work and too much like work for an unpaid free time hobby. RuneMaster Chapter 1. Author's notes Wow! 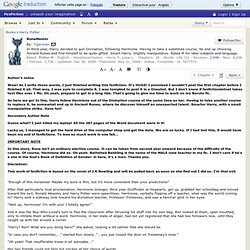 As I write those words, I just finished writing this fanfiction. It's HUGE! I promised I wouldn't post the first chapter before I finished it all. That way, I was sure to complete it. So here we go! Secondary Author Note. His Own Man Chapter 1. I do not own any rights to the Harry Potter franchise nor do I own the Harry Potter copyright. This is done purely for fun, not profit. Harry's eyes slid to the wailing baby under the seat. Memories of being that child, crying in a house filled with people who hated and feared him, choked him. Regardless of whatever Voldemort or Tom Riddle were guilty of, this unhappy baby did not deserve to suffer for his future crimes. He knelt and picked the child up. Gently he joggled the child around until it was propped against his chest and cradled against him like a rugby ball.

"You planned this from the very beginning, didn't you? " Harry Crow Chapter 1: An Escrow Agreement. Harry Crow The Dursleys are excruciatingly normal. They were just plain ordinary people, trying to live their orderly lives. Why should they take what they consider an abnormal freak into their home? This is so not a crossover fic. This story's first paragraph consists mainly of the wonderful words and work of Jo Rowling from the book that started it all.

To Shape and Change Chapter 1: A New Beginning. To Shape and Change Disclaimer: I obviously don't own the idea of Harry Potter or any of the money making forms of it. Summary: AU. Time Travel. Snape goes back in time, holding the knowledge of what is to come if he fails. No longer holding a grudge, he seeks to shape Harry into the greatest wizard of all time, starting on the day Hagrid took Harry to Diagon Alley. A/N: I have taken the liberty of adjusting some of the canon things, so just be aware - - meaning Snape comes from a future different from the actual HP novels. Oh God Not Again! Chapter 1. Chapter One Disclaimer: I do not own Harry Potter. Note: Please be aware that this is a parody. I know that this may seem redundant as that is made clear as it is labeled 'parody' in the genre section at the top but some people do not look at that apparently and I have gotten quite a few reviews from people who thought it was too over-the-top to enjoy until they noticed that it was a parody.

If you are one of those people then be sure to be aware of this now: THIS IS A PARODY. Also, this story had at least twenty chapters published before 'A Very Potter Musical' even came out. He'd been dreaming of it since the defeat of Voldemort. He wondered, briefly, why he was there. He counted the steps until he was standing right in front of where Sirius had fallen through. Harry Potter and the Methods of Rationality Chapter 1: A Day of Very Low Probability.

Disclaimer: J. K. Rowling owns Harry Potter, and no one owns the methods of rationality. This fic is widely considered to have really hit its stride starting at around Chapter 5. If you still don't like it after Chapter 10, give up. Please visit HPMOR DOT COM for: Reviews make me happy. Harry Potter and the Nightmares of Futures Past Chapter 1: Prologue The End of Days.