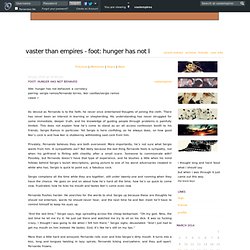 There has never been an interest in learning or shepherding. His understanding has never struggled for some immediate, deeper truth, and his knowledge of guiding people through problems is painfully limited. This does not explain how he’s come to stand as an all access confession booth to his friends, Sergio Ramos in particular. Yet Sergio is here confiding, as he always does, on how good Iker’s cock is and how Iker is stubbornly withholding said cock from him. Privately, Fernando believes they are both oversexed. Sergio complains all the time while they are together, still under twenty-one and rooming when they have the chance. Fernando flushes harder. “And the last time,” Sergio says, legs spreading across the cheap bedspread. “I don’t taste him.” “And he won’t give it to me.” Iker&sergio: real (madrid) love - Sergio's Gift. Iker/Sergio Cross Community Challenge:Title: Sergio’s GiftPairing: Iker Casillas/Sergio RamosRating: NC-17Disclaimer: LiesWords: 1200Note: I also posted this on my journal, but for the challenge I though it might be easiest to repost here! 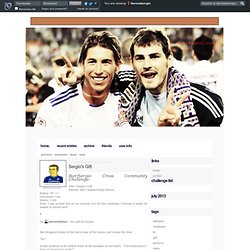 For adorerdollylux - her gift for Sergio Iker dragged Sergio to the back room of the house, and locked the door. “So.” Sergio grinned as he looked down at the package in his hands. Iker took the box and opened it. Vaster than empires - foot: nine point eight and falling. Title: gravitypairing: iker casillas/sergio ramosrated: pg13 “You’re not drinking your wine,” Iker said, raising his glass from the table. 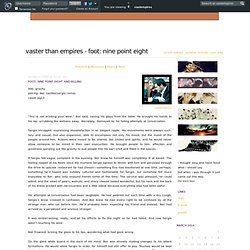 He brought his hands to his lap, scrubbing the wetness away, discretely, dismayed by his failing attempts at conversation. Sergio shrugged, expressing dissatisfaction in an elegant ripple. His movements were always such, lazy and casual, but also expansive, able to encompass not only his mood, but the mood of the people around him. Actions were meant to be shared, like smiles and spirits, and he would never allow someone to be mired in their own insecurities. If Sergio felt vague complaint in the evening, Iker knew he himself was completely ill at eased. His attempts at conversation had been laughable. It was embarrassing, really, and all his efforts to fix the night so far had failed. Vaster than empires - foot: maintenance man. Title: maintenance man: the tragedy, the ecstasypairing: iker casillas/sergio ramosrated: nc17 Sergio is in the kitchen breaking apart cardboard boxes and placing into the bin when he hears a sharp knock on the door to his apartment and a low voice call, “maintenance.” 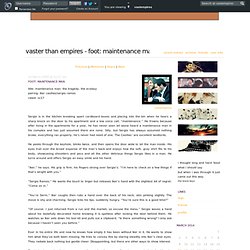 He frowns because after living in the apartments for a year, he has never seen let alone heard a maintenance man in his complex and has just assumed there are none. Vaster than empires - foot: everyone will know you're mine. Title: everyone will know you're minepairing: iker casillas/sergio ramosrated: r It’s called a song but Sergio knows it is Liverpool’s heart that rings throughout the stadium, echoing down into the tunnels where he paced.

Its thumping pride batters at his own and there is a struggle to keep his head high. Teammates pass him one by one, gaze focused or drifting, upset, and it makes him ache to know his own mirrored their disappointment. A cold feeling washes over him as Raul comes through the entrance. Iker is in his arms, face buried into Raul’s neck, mouth opened slightly to draw in breath because he’s. He rushes forward and places a kiss at Iker’s temple. Vaster than empires - foot: heart caught fire. Title: heart caught firepairing: iker casillas/sergio ramosrated: nc17 A finger drifting along his back is enough to break Sergio's concentration. 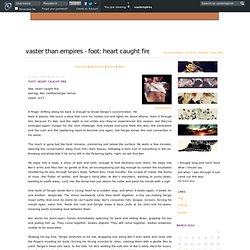 He feels it keenly, the touch a blow that curls his insides out and lights his blood aflame, feels it through him because it's Iker and the night is not unlike any they've experienced this season, but they've emerged again, hungry for the next challenge. And maybe everyone feels this way, the adrenaline and the rush and the sweltering need to become one again, but Sergio knows this one connection is his alone. The touch is gone but the heat remains, simmering just below the surface. He waits a few minutes, steering the conversation away from him, then leaves, following a faint trail of something in the air. He steps into a nook, a sliver of wall and cloth, enough to fold darkness over them.

Vaster than empires - foot: you make the rocking world go round. Title: fat-bottomed girlspairing: iker casillas/sergio ramosrated: nc17 It starts slowly at first, so slow, Iker doesn’t recognize the problem until he’s restricted by the trainers. 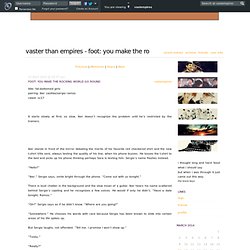 Iker stands in front of the mirror debating the merits of his favorite red checkered shirt and the new t-shirt Villa sent, always testing the quality of his line, when his phone buzzes. He tosses the t-shirt to the bed and picks up his phone thinking perhaps Sara is texting him. Sergio’s name flashes instead. “Hello?” “Iker,” Sergio says, smile bright through the phone. There is loud chatter in the background and the slow moan of a guitar. “Oh?” “Somewhere.” Vaster than empires - foot: hunger has not receded. Title: hunger has not recededpairing: iker casillas/sergio ramosrated: nc17 Sergio keeps saying he’s ready but Iker doesn’t believe him. 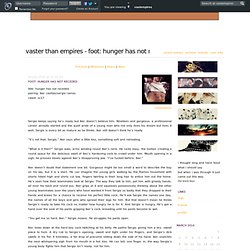 Nineteen and gorgeous, a professional career already started and the quiet pride of a young man who not only lives his dream but lives it well, Sergio is every bit as mature as he thinks. Iker still doesn’t think he’s ready. “It’s not that, Sergio,” Iker says after a little kiss, something soft and retreating. “What is it then?” Iker doesn’t doubt that statement one bit. One More Try (Part Five/?) Title: One More Try Part: Five.Pairing: Iker Casillas/Sergio RamosRating: NC-17Disclaimer: Tragically untrue.Summary: Lessons come in all forms.Author's Note: Everytime I write them, it becomes my favorite thing I've ever written. 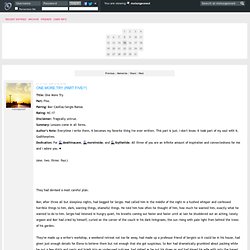 This part is just. I don't know. It took part of my soul with it. One More Try (Part Four) Title: One More Try Part: Four.Pairing: Iker Casillas/Sergio RamosRating: NC-17Disclaimer: Tragically untrue.Summary: Lessons come in all forms.Author's Note: Fuck. 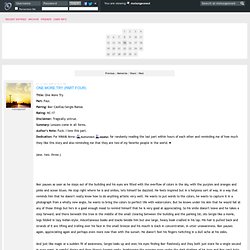 I love this part.Dedication: For Nikki& Anna ( ibythetide& sixsofar) for randomly reading the last part within hours of each other and reminding me of how much they like this story and also reminding me that they are two of my favorite people in the world. Inside (Iker Casillas/Sergio Ramos) Title: InsidePairing: Iker Casillas/Sergio RamosWord Count: 2574Disclaimer: Tragically untrue.Summary: Dirty kink. "Chori, don't ever say that again. " "What? It feels good. What's wrong with that? We're all adults here. " "I don't need that mental image, thank you," Álvaro assures him, smiling around the top of his beer bottle before taking another drink.

"I don't know. "XABI. You Want This (Iker Casillas/Sergio Ramos) Title: You Want ThisPairing: Iker Casillas/Sergio RamosRating: RWord Count: 2109Disclaimer: Tragically untrue.Summary: Sergio's new to the team. Alluring as all bright, shiny, new (young) things are. "Need anything, Ramos? I'm heading into the kitchen. " Iker pushes himself up from his recliner, empty bottle in hand, his eyes only on Sergio and none of the other guys in the room. David grins up at Iker and nudges him with his foot as he passes. I Wanna Get In Your Pants (Iker Casillas/Sergio Ramos) Title: I Wanna Get In Your PantsPairing: Iker Casillas/Sergio RamosRating: NC-17 haha oooh myWord Count: 3395 no seriously what is wrong with me i turn a blowjob into like the fucking odyssey or somethingDisclaimer: Tragically untrue.Summary:Blame Sergio.Dedication: This is dedicated to Sergio Ramos' cock and to ibythetide, my two reasons for living.

Sergio had worn them on purpose. He had chosen them because he knows Iker. Or, at least he has his theories about Iker. Sergio is a lot quieter than most people give him credit for, and he has an incredible ability to sit back during animated, drunken conversations in large groups and just observe; observe facial expressions, flushing of cheeks, smirks, quickly caught embarrassment, and truth in dark eyes. Sergio smiles in a roomful of people, a restaurant surrounded by his teammates celebrating his own twenty-fourth birthday, at the memory of the past weekend.

"What about 'em? " "They're just... " "Yeah. I'm on Fire (Iker/Sergio) Title: I'm on FirePairing: Iker Casillas/Sergio RamosRating: NC-17Disclaimer: Tragically untrue.Summary:At night I wake up with the sheets soaking wetAnd a freight train running through theMiddle of my headOnly you can cool my desireI'm on fire Everyone else had gotten up, had scattered about the yard, some with sparklers, others with girls, others still with cigarettes and a beer, the night having settled into one of those times for reflection. Iker monitors the fire, his trusty poking stick resting against the side of the cooler he's sitting on, bare back against the rough bark of a tall oak tree. His beer is nestled between his spread legs and he's staring intently into the fire, cigarette dangling lightly from his pale fingers. A girl giggles somewhere in the near distance and the sound is cut off abruptly, probably by a hungry boy mouth. "So what's this party for again?