Wealthy Getting Out of Fiat Money II. Debt: The first five thousand years - David Graeber. Throughout its 5000 year history, debt has always involved institutions – whether Mesopotamian sacred kingship, Mosaic jubilees, Sharia or Canon Law – that place controls on debt's potentially catastrophic social consequences. It is only in the current era, writes anthropologist David Graeber, that we have begun to see the creation of the first effective planetary administrative system largely in order to protect the interests of creditors. What follows is a fragment of a much larger project of research on debt and debt money in human history. The first and overwhelming conclusion of this project is that in studying economic history, we tend to systematically ignore the role of violence, the absolutely central role of war and slavery in creating and shaping the basic institutions of what we now call "the economy".

What's more, origins matter. Let me start with the institution of slavery, whose role, I think, is key. The reason I stress this is because this logic is still with us. All Paper is STILL a short position on gold. Think about this great business idea for a minute. 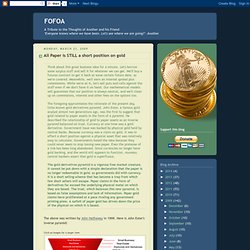 Let's borrow some surplus stuff and sell it for whatever we can get. We'll buy a futures contract to get it back at some certain future date, so we're covered. Meanwhile, we'll earn an interest spread plus commissions. While we're at it, let's sell puts and calls against the stuff even if we don't have it on hand. Our mathematical models will guarantee that our position is always neutral, and we'll clean up on commissions, interest and other fees on the options too.The foregoing approximates the rationale of the present day, little-known gold derivatives pyramid.

The above was written by John Hathaway in 1999. Click on images for a larger view Today I read an article titled "Hyperinflation is Impossible: Part 1" by Matt Stiles. It is often said that we live with a "fiat currency" or with "paper money. " This is an argument that seems very convincing on first glance. But there is another group of "inflationists" who I do respect greatly. The Impossible Math of Debt Backed Money… and why we WILL take an Evolutionary Step Forward! “The hollow words “deficits don’t matter” echo through my mind. 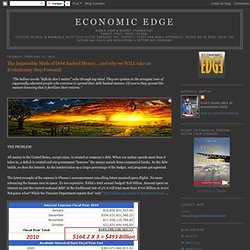 They are spoken in the arrogant tone of supposedly educated people who continue to spread their debt backed manure. Of course they spread this manure knowing that it fertilizes their returns.” All money in the United States, except coins, is created as someone’s debt. When our nation spends more than it takes in, a deficit is created and our government “borrows” the money mainly from commercial banks.

As the debt builds, so does the interest. The latest example of the squeeze is Obama’s announcement cancelling future manned space flights. …the real amount of money spent on interest last year alone nearly equals the total amount of money our government takes in! Please let that sink in. That’s right, this is no joke! Consider that by the end of 2010 we will have $14.3 Trillion just in current debt, just at the Federal level.