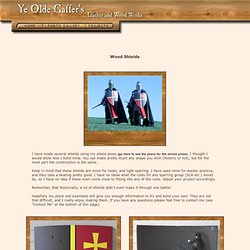 You can make your paint job as simple or as complex as you wish. If you mess up, you can just primer over it and start over. If you are trying to match a surcoat or other outfit take it with you to the paint store to assist in matching the colors. If you are really brave you could actually go in with your outfit on. I paint the front and edges of my shield with my base color. If you are putting on an edging then you can continue on, if not then you are finished! Remember you can produce a shield that is simple or complex as you wish. On the Use of the Square Target. The Square or Italian Target was a recognized type of Rapier defensive equipment in period. 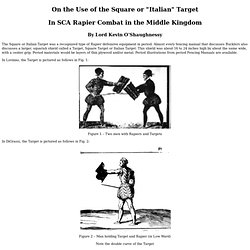 Almost every fencing manual that discusses Bucklers also discusses a larger, squarish shield called a Target, Square Target or Italian Target. This shield was about 16 to 24 inches high by about the same wide, with a center grip. Period materials would be layers of thin plywood and/or metal. Period illustrations from period Fencing Manuals are available. In Lovinno, the Target is pictured as follows in Fig. 1: Figure 1 – Two men with Rapiers and Targets In DiGrassi, the Target is pictured as follows in Fig. 2: Figure 2 – Man holding Target and Rapier (in Low Ward) Note the double curve of the Target The proportions of the Targets in the period illustrations give me a rough indication of how big they were. I made my first Targets (2 of them) out of .09" thick Aluminum, 17 inches across the top, 17 inches tall, and 16 inches across the bottom with the corners carefully rounded (about a ½" radius).

Sword and Buckler Fencing. By J. 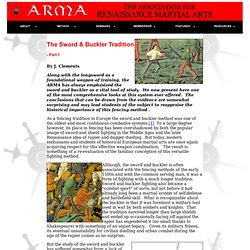 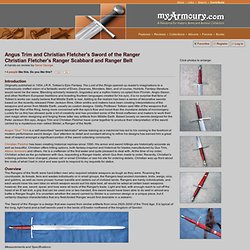 Tolkien's Epic Fantasy The Lord of the Rings opened up reader's imaginations to a meticulously crafted vision of a fantastic world of Elves, Dwarves, Monsters, Men, and of course, Hobbits. Fantasy literature would never be the same. Blending scholarly research, linguistics and a mythic history co-opted from Finnish, Anglo-Saxon, and other Northern European traditions and boasting fourteen languages created for his epic, it is no surprise that fans of Tolkien's works can easily believe that Middle Earth is real. Adding to the realism has been a series of decorative swords based on the recently released Peter Jackson films. 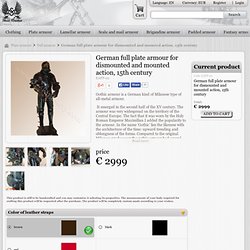 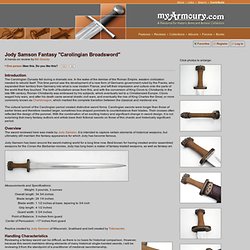 In the wake of the demise of the Roman Empire, western civilization needed to rebuild itself. This time period saw the development of a new form of Germanic government ruled by the Franks, who expanded their territory from Germany into what is now modern France, and left their impression and culture onto the parts of the world that they touched. The birth of feudalism arose from this, and with the conversion of King Clovis to Christianity in the late fifth century, Roman Christianity was embraced by his subjects, which eventually led to a Christianized Europe.

Clovis waged holy wars, and after his death came several drastic civil wars, and eventually the rise of King Charles the Great, or more commonly known as Charlemagne, which marked the complete transition between the classical and medieval era. Eric McHugh Custom Halberd. Eric McHugh Custom Halberd A hands-on review by Eric Nower Introduction Polearms—the workhorse weapons of medieval and renaissance infantry—came in a variety of forms, including the halberd. 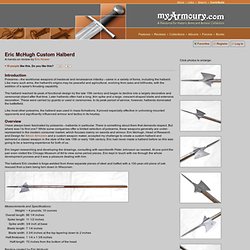 Like many such arms, the halberd's origins may be peaceful and agricultural, evolving from axes and billhooks, with the addition of a spear's thrusting capability. The halberd reached its peak of functional design by the late 15th century and began to decline into a largely decorative and ceremonial object after that time. Later halberds often had a long, thin spike and a large, crescent-shaped blade and extensive decoration. These were carried by guards or used in ceremonies. Dürer Bastard Sword. Christian Fletcher AT1520.