Harry Beck. Henry Charles Beck (Leyton, London, 4 June 1902[1] – 18 September 1974), known as Harry Beck, was an English technical draftsman best known for creating the present London Underground Tube map in 1931.[2] Beck drew up the diagram in his spare time while working as an engineering draftsman at the London Underground Signals Office. 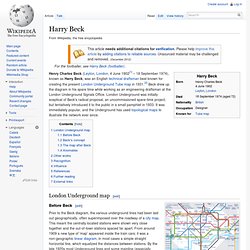 London Underground was initially sceptical of Beck's radical proposal, an uncommissioned spare-time project, but tentatively introduced it to the public in a small pamphlet in 1933. It was immediately popular, and the Underground has used topological maps to illustrate the network ever since. London Underground map[edit] The modern Tube map, based on the simplified topological design invented by Beck Before Beck[edit] Prior to the Beck diagram, the various underground lines had been laid out geographically, often superimposed over the roadway of a city map. Tube map. Tube map as of May 2013 As a schematic diagram, it shows not necessarily the geographic but rather the relative positions of stations along the lines, stations' connective relations with each other and fare zones. 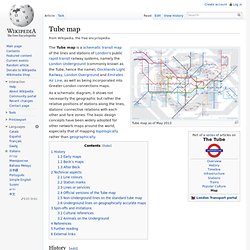 The basic design concepts have been widely adopted for other network maps around the world, especially that of mapping topologically rather than geographically. History[edit] Early maps[edit] What is now a single network of lines controlled by a single organisation began as a collection of independent underground railway companies that constructed lines in the 19th and early 20th centuries. James Montgomery Flagg. James Montgomery Flagg (June 18, 1877 – May 27, 1960) was an American artist and illustrator. 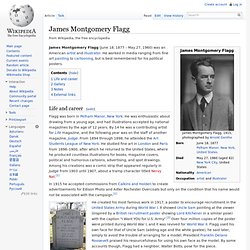 He worked in media ranging from fine art painting to cartooning, but is best remembered for his political posters. Life and career[edit] Flagg was born in Pelham Manor, New York. He was enthusiastic about drawing from a young age, and had illustrations accepted by national magazines by the age of 12 years. By 14 he was a contributing artist for Life magazine, and the following year was on the staff of another magazine, Judge. In 1915 he accepted commissions from Calkins and Holden to create advertisements for Edison Photo and Adler Rochester Overcoats but only on the condition that his name would not be associated with the campaign.[2] He created his most famous work in 1917, a poster to encourage recruitment in the United States Army during World War I. James Montgomery Flagg died in New York City and was interred at Woodlawn Cemetery.

Ft. Uncle Sam. Uncle Sam (initials U.S.) is a common national personification of the American government that, according to legend, came into use during the War of 1812 and was supposedly named for Samuel Wilson.[2] The first use of Uncle Sam in literature was in the 1816 allegorical book "The Adventures of Uncle Sam in Search After His Lost Honor" by Frederick Augustus Fidfaddy, Esq. 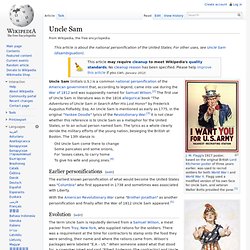 An Uncle Sam is mentioned as early as 1775, in the original "Yankee Doodle" lyrics of the Revolutionary War.[3] It is not clear whether this reference is to Uncle Sam as a metaphor for the United States, or to an actual person named Sam. The lyrics as a whole clearly deride the military efforts of the young nation, besieging the British at Boston. The 13th stanza is: Old Uncle Sam come there to change Some pancakes and some onions, For 'lasses cakes, to carry home To give his wife and young ones.[4] Earlier personifications[edit] Columbia Evolution[edit] However, even with the effective abandonment of Brother Jonathan (i.e.

Ca‑Cola Bottles History : Green Glass & Old Coca‑Cola Bottles. Coca‑Cola’s history has got a lot of bottle - more than 115 years’ worth, in fact. 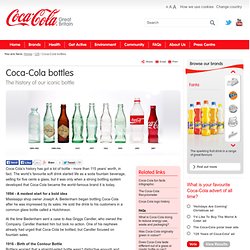 The world’s favourite soft drink started life as a soda fountain beverage, selling for five cents a glass, but it was only when a strong bottling system developed that Coca‑Cola became the world-famous brand it is today. 1894 - A modest start for a bold ideaMississippi shop owner Joseph A. Biedenharn began bottling Coca‑Cola after he was impressed by its sales. He sold the drink to his customers in a common glass bottle called a Hutchinson.

At the time Biedenharn sent a case to Asa Griggs Candler, who owned the Company. 1916 - Birth of the Contour BottleBottlers worried that a straight-sided bottle wasn’t distinctive enough and that Coca‑Cola was becoming easily confused with ‘copycat’ brands. The Contour Bottle design was inspired by the curves and grooves of a cocoa bean. 1955 – Packaging innovationsFor the first time, people could buy different sized bottles of Coca‑Cola.