Education Nation: Finding Classroom Success In Bilingual Mix Of Spanish, English. This piece comes to us courtesy of The Hechinger Report. 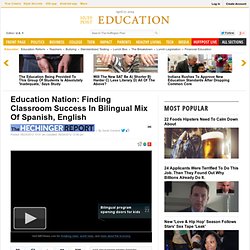 Ernest R. Geddes Elementary School in Baldwin Park, Calif., is a noisy place. Students in older grades spend large amounts of class time talking and arguing with one another in small groups. One third-grade teacher, Pamela Ochoa, encourages the children in her group of struggling readers to get out of their chairs and dance. Kindergartners in another room interrupt stories to predict what will happen next and ask about words they don't understand.

Often at this majority-Hispanic school, the arguments and singing that spill out of classrooms are in a mix of Spanish and English. "I don't like quiet classrooms," says Virginia Castro, the school's principal. At Geddes, 87 percent of students are poor enough to qualify for federally subsidized lunches. In math, 67 percent of California elementary-age students were proficient or above on math tests. And then there is Castro's strong leadership. "Parents are the core," Castro said. Translating the Entire Internet, One Language Lesson at a Time. Luis Von Ahn wants to translate the entire internet. 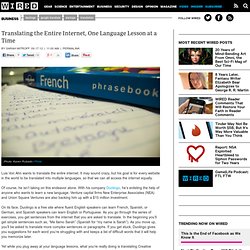 It may sound crazy, but his goal is for every website in the world to be translated into multiple languages, so that we can all access the internet equally. Of course, he isn’t taking on this endeavor alone. With his company Duolingo, he’s enlisting the help of anyone who wants to learn a new language. Venture capital firms New Enterprise Associates (NEA) and Union Square Ventures are also backing him up with a $15 million investment. Translating Chinese Characters Now As Easy As 1, 2, 3! Amara's Wiki-Style Translation Platform Enables Global Growth Of Education Startups. Google Translate for Android Update Adds Photo Support - Bonnie Cha - Product News. Traveling to a foreign country is always exciting, but it can be a bit intimidating if you don’t understand the language. 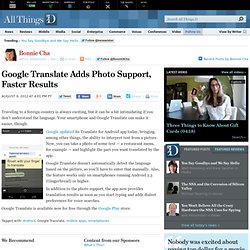 Your smartphone and Google Translate can make it easier, though. Google updated its Translate for Android app today, bringing, among other things, the ability to interpret text from a picture. Now, you can take a photo of some text — a restaurant menu, for example — and highlight the part you want translated by the app. Google Translate doesn’t automatically detect the language based on the picture, so you’ll have to enter that manually. Also, the feature works only on smartphones running Android 2.3 (Gingerbread) or higher. In addition to the photo support, the app now provides translation results as soon as you start typing and adds dialect preferences for voice searches.

Language Immersion for Chrome Teaches You a New Language While You Browse the Web. The Quest to Ask Better Questions - Steven Heller - Entertainment. Warren Berger's next book will look to improve the very act of asking. 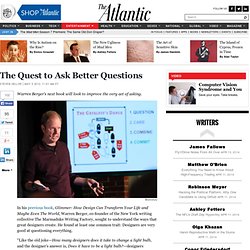 Bloomsbury In his previous book, Glimmer: How Design Can Transform Your Life and Maybe Even The World, Warren Berger, co-founder of the New York writing collective The Marmaduke Writing Factory, sought to understand the ways that great designers create. He found at least one common trait: Designers are very good at questioning everything. "Like the old joke—How many designers does it take to change a light bulb, and the designer's answer is, Does it have to be a light bulb? —designers question why things are done a certain way, and whether there might be a better, more interesting way," Berger tells me.

Questions are sometimes better than answers. Middle East Volunteers Compile a Web 2.0 Arabic Dictionary. With an increasing demand for online content in Arabic, and the language seeing impressive growth rates on sites like Twitter and Wikipedia, a new project aims to do its part to bridge the gap between Arabic and English content in social media and technology, Gulf News reports. 2,500 volunteers from across 28 countries are in the process of putting together a dictionary of technological and social media-related terminology. 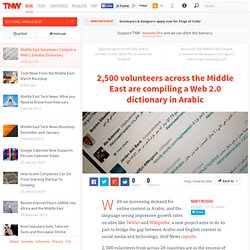 While Arabic content continues to grow, there are certain words, like ‘spam’, ‘retweet’ and ‘phishing’ that have emerged but have no equivalent in Arabic, and are often written either in Latin characters, or simply transliterated into Arabic. The Benefits of Bilingualism. Twitter Continues to Shape the English Language. Merriam-Webster, a dictionary dating back to the late 19th century would have us think that ‘pragmatic’ is the word of the year for 2011, and to be perfectly honest, we’re left scratching our heads. 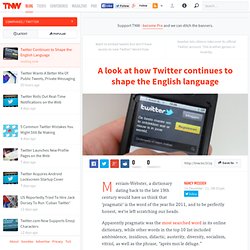 Apparently pragmatic was the most searched word in its online dictionary, while other words in the top 10 list included ambivalence, insidious, didactic, austerity, diversity, socialism, vitriol, as well as the phrase, “après moi le déluge.” While pragmatic may be the most searched word of the year, it certainly doesn’t suit the unbelievable amount of ups and downs the year has seen. Just taking a look at Google’s Zetigeist video for 2011 is enough to tell you that pragmatism is nowhere to be found.