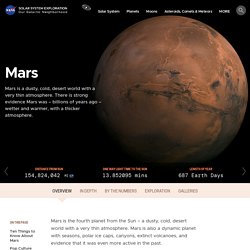 This dynamic planet has seasons, polar ice caps, canyons, extinct volcanoes, and evidence that it was even more active in the past. Mars is one of the most explored bodies in our solar system, and it's the only planet where we've sent rovers to roam the alien landscape. 50 Years of Mars Exploration. A New Form of Photosynthesis Could Help Us Grow Plants on Other Planets Like Mars. K.S. 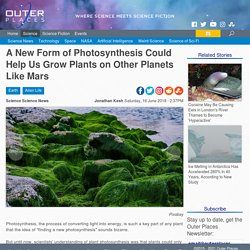 AnthonyTuesday, 22 October - 2:17PM The newly-formed U.S. Army Futures Command, created last year to support the "continuous transformation of Army modernization in order to provide future warfighters with the concepts, capabilities and organizational structures they need to dominate a future battlefield" is living up to its name, undertaking an intriguing partnership with Tom DeLonge's To The Stars Academy (TTSA) to test 'exotic' metals acquired by TTSA earlier this year. The contract, reported by Bloomberg and originally published on the Black Vault, names Luis Elizondo, a former Pentagon official who claims he was involved with the Defense Intelligence Agency's (DIA) Advanced Aerospace Threat Identification Program AATIP, as a principal investigator for TTSA.

TTSA is best known for its release of headline-grabbing videos purporting to show Navy fighter jets encountering unidentified aircraft and the various claims made by Elizondo about the AATIP. Human urine may be Number 1 for fertilizing plants on Mars. Shipping fertilizer to colonies on Mars could be quite a hassle – it would certainly be better if the colonists were able to grow crops using whatever's on hand. 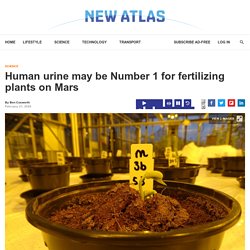 The continuation of an existing study now indicates that urine might in fact serve as a perfectly good fertilizer. It was back in 2016 that we first heard how scientists at The Netherlands' Wageningen University were trying to grow food plants in simulations of both lunar and Martian soil. At the time, it was found that while the plants didn't fare well in nothing but the soil, they did better when a fertilizer made of fresh-cut grass was added. Unfortunately, though, the Red Planet isn't known for its lush lawns – and growing grass in Martian greenhouses would use up a lot of water and space.

With that in mind, the researchers more recently looked to struvite – it's a phosphate mineral, which they obtained from human urine in wastewater treatment facilities. Wageningen University Source: Wageningen University. Liquid Water Found on Mars. Moon to Mars. Preparing for that trip to Mars. This is the first of a two-part series on preparations for upcoming human space missions to the Red Planet. 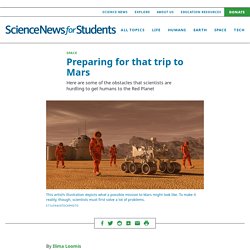 Mark Watney has found himself stranded on Mars. It’s 2035 and his crewmates, thinking him dead, have left him behind in their evacuation of the Red Planet. He faces years, all alone, trying to survive in the face of radiation, storms and little food. That last problem turns out to be a solvable one. Watney is a botanist.

Educators and Parents, Sign Up for The Cheat Sheet Weekly updates to help you use Science News for Students in the learning environment This scenario, from the book and movie The Martian, is science fiction. Why? But ferrying humans to Mars would be a much bigger challenge than getting them to the moon. Space farmers Today’s space travelers don’t go to the moon or Mars; they head to the International Space Station (ISS). If you visited the ISS today, nearly every bit of food you ate would have been shipped up from Earth.

There are some downsides, though. Print it. Traveling to Mars? Top 6 health challenges. International Space Station astronauts have been helping to pave the wave for future manned Mars missions. 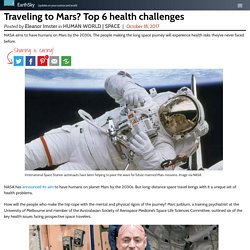 Image via NASA. NASA has announced its aim to have humans on planet Mars by the 2030s. But long-distance space travel brings with it a unique set of health problems. How will the people who make the trip cope with the mental and physical rigors of the journey? Marc Jurblum, a training psychiatrist at the University of Melbourne and member of the Australasian Society of Aerospace Medicine’s Space Life Sciences Committee, outlined six of the key health issues facing prospective space travelers.