Questions and Answers on Stem Cell Research. Scientific and Therapeutic Use of Human Embryonic Stem Cells. This document seeks to contribute to the debate on the production and use of embryonic stem cells which is now taking place in scientific and ethical literature and in public opinion. 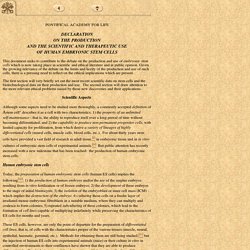 Given the growing relevance of the debate on the limits and liceity of the production and use of such cells, there is a pressing need to reflect on the ethical implications which are present. The first section will very briefly set out the most recent scientific data on stem cells and the biotechnological data on their production and use. The second section will draw attention to the more relevant ethical problems raised by these new discoveries and their applications. Scientific Aspects Human embryonic stem cells These ES cells, however, are only the point of departure for the preparation of differentiated cell lines, that is, of cells with the characteristics proper of the various tissues (muscle, neural, epithelial, haematic, germinal, etc.). 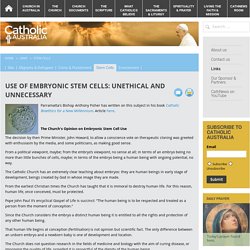 Article here. The Church's Opinion on Embryonic Stem Cell Use The decision by then Prime Minister, John Howard, to allow a conscience vote on therapeutic cloning was greeted with enthusiasm by the media, and some politicians, as making good sense. From a political viewpoint, maybe; from the embryo’s viewpoint, no sense at all; in terms of an embryo being no more than little bunches of cells, maybe; in terms of the embryo being a human being with ongoing potential, no way. The Catholic Church has an extremely clear teaching about embryos: they are human beings in early stage of development, beings created by God in whose image they are made. From the earliest Christian times the Church has taught that it is immoral to destroy human life. Since the Church considers the embryo a distinct human being it is entitled to all the rights and protection of any other human being. 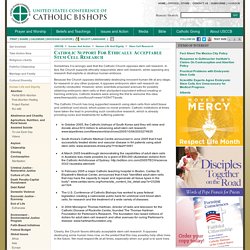 In fact, the Church supports ethically responsible stem cell research, while opposing any research that exploits or destroys human embryos. Because the Church opposes deliberately destroying innocent human life at any stage, for research or any other purpose, it opposes embryonic stem cell research as currently conducted. However, when scientists proposed avenues for possibly obtaining embryonic stem cells or their pluripotent equivalent without creating or harming embryos, Catholic leaders were among the first to welcome this idea: www.freerepublic.com/focus/f-news/1435477/posts.

The Catholic Church has long supported research using stem cells from adult tissue and umbilical cord blood, which poses no moral problem. Catholic institutions at times have taken the lead in promoting such constructive research, which is already providing cures and treatments for suffering patients: Ethical Issues in Stem Cell Research. Human embryonic stem cells: research, ethics and policy. Embryonic stem cell research: an ethical dilemma. A human embryo can split into twins or triplets until about 14 days after fertilization Egg and sperm: some people believe an embryo must be fully protected from conception onwards (Wellcome Images/Spike Walker) Human blastocyst on the tip of a pin: embryonic stem cells can be grown from cells found in the blastocyst (Wellcome Images/Yorgos Nikas) Some people think an embryo deserves special protection from about 14 days after fertilization. 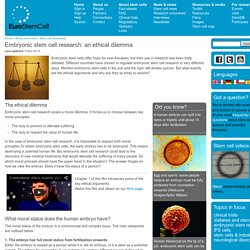 Canadian Stem Cell Foundation. What is a Stem Cell? 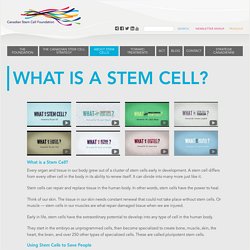 Every organ and tissue in our body grew out of a cluster of stem cells early in development. A stem cell differs from every other cell in the body in its ability to renew itself. It can divide into many more just like it. Stem cells can repair and replace tissue in the human body. In other words, stem cells have the power to heal. Think of our skin. Early in life, stem cells have the extraordinary potential to develop into any type of cell in the human body. They start in the embryo as unprogrammed cells, then become specialized to create bone, muscle, skin, the heart, the brain, and over 250 other types of specialized cells. Using Stem Cells to Save People Researchers have found that stem cells can be used to treat disease and injury.

For example, bone marrow transplants have been taking place for more than 40 years. In the past 20 years, significant new discoveries have emerged — breakthroughs that the original discoverers of stem cells never dreamed about.