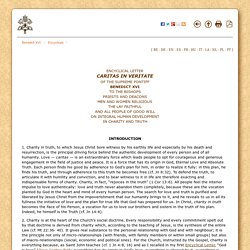 Charity in truth, to which Jesus Christ bore witness by his earthly life and especially by his death and resurrection, is the principal driving force behind the authentic development of every person and of all humanity. Love — caritas — is an extraordinary force which leads people to opt for courageous and generous engagement in the field of justice and peace. It is a force that has its origin in God, Eternal Love and Absolute Truth. Each person finds his good by adherence to God's plan for him, in order to realize it fully: in this plan, he finds his truth, and through adherence to this truth he becomes free (cf. Sollicitudo Rei Socialis (30 December 1987) IOANNES PAULUS PP. 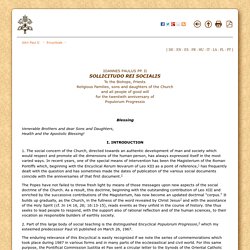 II SOLLICITUDO REI SOCIALIS To the Bishops, PriestsReligious Families, sons and daughters of the Church and all people of good willfor the twentieth anniversary of Populorum Progressio Blessing Venerable Brothers and dear Sons and Daughters, Health and the Apostolic Blessing! 1. Populorum Progressio (March 26, 1967) The Church's Concern With an even clearer awareness, since the Second Vatican Council, of the demands imposed by Christ's Gospel in this area, the Church judges it her duty to help all men explore this serious problem in all its dimensions, and to impress upon them the need for concerted action at this critical juncture. 2. 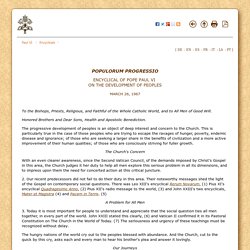 Our recent predecessors did not fail to do their duty in this area. Their noteworthy messages shed the light of the Gospel on contemporary social questions. There was Leo XIII's encyclical Rerum Novarum, (1) Pius XI's encyclical Quadragesimo Anno, (2) Pius XII's radio message to the world, (3) and John XXIII's two encyclicals, Mater et Magistra (4) and Pacem in Terris. (5) Confronting Racism - Australian Catholic Social Justice Council.

“… social or cultural discrimination in basic personal rights on the grounds of sex, race, colour, social conditions, language, or religion must be curbed and eradicated as contrary to God’s design.” 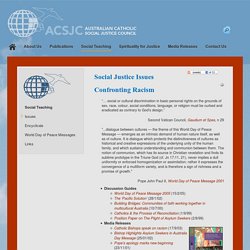 Second Vatican Council, Gaudium et Spes, n 29 "...dialogue between cultures — the theme of this World Day of Peace Message — emerges as an intrinsic demand of human nature itself, as well as of culture. Racism. Teaching Resources Rebuilding the Bridge: 50th anniversary of the Civil Rights Movement - The U.S. recently celebrated the 50th anniversaries of several important civil rights milestones. 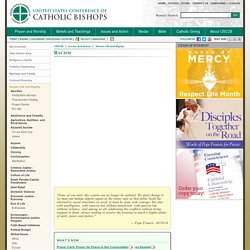 To commemorate these important events and the contributions of many Catholics to the civil rights movement, Cultural Diversity in the Church and African American Affairs, in collaboration with several other organizations, has launched Rebuilding the Bridge: African American Affairs' 50th Anniversary Initiative. The Racial Divide in the United States - Most Reverend Edward K. CSTandRacism Fall2009jsq. Race & Ethnicity: The Fight Against Racism Today. Effect of Systemic Crisis - The deepening of capitalism's systemic crisis combined with the legacy of 12 years of Reagan-Bush's unprecedentedly racist offensive, which has been extended and deepened by the Clinton administration, have brought about a dramatic increase in the effects of racism. 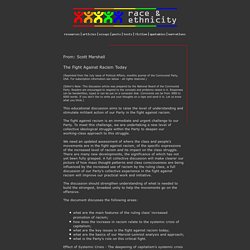 The fact that there are still some illusions about the nature of this administration has made it more difficult to fight in some ways. The increase in racism must be placed in the context of the crisis of capitalism - because it is the capitalist class which benefits from racism, using it to divide and to confuse the people about the reasons for the economic and social crisis of the system. Forbes Welcome. International Socialist Review. IN THE summer of 2003, President George W. 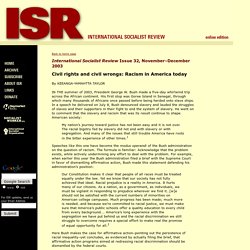 Bush made a five-day whirlwind trip across the African continent. His first stop was Goree Island in Senegal, through which many thousands of Africans once passed before being herded onto slave ships. In a speech he delivered on July 8, Bush denounced slavery and lauded the struggles of slaves and their supporters in their fight to end the system of slavery. Racism and Mainstream Media. When newspaper executives make a commitment to change, they often show great prowess in meeting their goals: Consider the breathtaking speed with which they added color graphics and lifestyle sections to their pages. 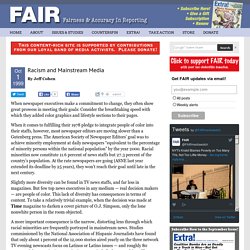 When it comes to fulfilling their 1978 pledge to integrate people of color into their staffs, however, most newspaper editors are moving slower than a Gutenberg press. The American Society of Newspaper Editors’ goal was to achieve minority employment at daily newspapers “equivalent to the percentage of minority persons within the national population” by the year 2000.

Racial minorities now constitute 11.6 percent of news staffs but 27.3 percent of the country’s population. At the rate newspapers are going (ASNE last year extended its deadline by 25 years), they won’t reach their goal until late in the next century. Nazi Racism. For years before Adolf Hitler became chancellor of Germany, he was obsessed with ideas about race. 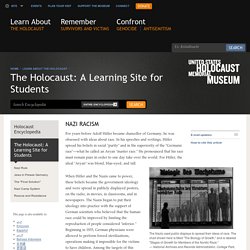 In his speeches and writings, Hitler spread his beliefs in racial "purity" and in the superiority of the "Germanic race"—what he called an Aryan "master race. " He pronounced that his race must remain pure in order to one day take over the world. For Hitler, the ideal "Aryan" was blond, blue-eyed, and tall. When Hitler and the Nazis came to power, these beliefs became the government ideology and were spread in publicly displayed posters, on the radio, in movies, in classrooms, and in newspapers. The Nazis began to put their ideology into practice with the support of German scientists who believed that the human race could be improved by limiting the reproduction of people considered "inferior.

" Racism. Author and Page information Image © Understanding Race Racism is the belief that characteristics and abilities can be attributed to people simply on the basis of their race and that some racial groups are superior to others. 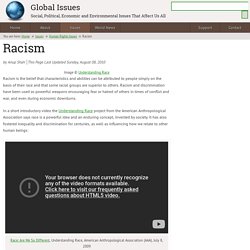 Racism and discrimination have been used as powerful weapons encouraging fear or hatred of others in times of conflict and war, and even during economic downturns.