L. Ron Hubbard Interview: Introduction To Scientology [1966] — αηoηs. Long before Xenu: Scientology’s actual origin story, as told by a former member. We have a real treat for you today. 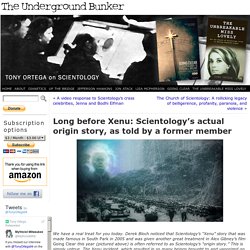 Derek Bloch noticed that Scientology’s “Xenu” story that was made famous in South Park in 2005 and was given another great treatment in Alex Gibney’s film Going Clear this year (pictured above) is often referred to as Scientology’s “origin story.” This is simply untrue. The Xenu incident, which resulted in so many beings brought to and vaporized on Earth, took place a mere 75 million years ago. But Scientology founder L.

Ron Hubbard claimed that the universe itself was some 4 quadrillion years old, and that it had been created by “bored” thetans playing some kind of game. Xenu is the most famous figure in Scientology to outsiders. Long before Xenu decided to turn Earth into a prison planet for everyone that he thought would rebel against his regime, there were disembodied energies floating throughout a universe of emptiness. From that point this life energy came into existence with nothing else around. Operation Clambake - The Inner Secrets Of Scientology. Who Is Overlord Xenu? - Scientology's Creation Myth. By Catherine Beyer Updated July 24, 2016. 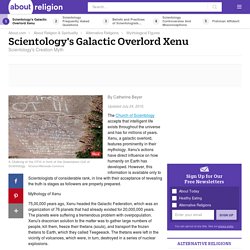 The Church of Scientology accepts that intelligent life exists throughout the universe and has for millions of years. Xenu, a galactic overlord, features prominently in their mythology. Xenu's actions have direct influence on how humanity on Earth has developed. However, this information is available only to Scientologists of considerable rank, in line with their acceptance of revealing the truth is stages as followers are properly prepared. Church of Scientology - Dianetics Answers and Authentic Information. Blogging Dianetics from cover to cover. In 1950, L. 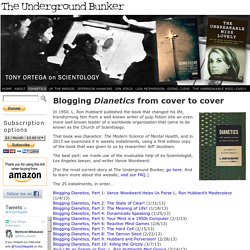 Ron Hubbard published the book that changed his life, transforming him from a well known writer of pulp fiction into an even more well known leader of a worldwide organization that came to be known as the Church of Scientology. That book was Dianetics: The Modern Science of Mental Health, and in 2013 we examined it in weekly installments, using a first edition copy of the book that was given to us by researcher Jeff Jacobsen. The best part: we made use of the invaluable help of ex-Scientologist, Los Angeles lawyer, and writer Vance Woodward. [For the most current story at The Underground Bunker, go here. And to learn more about this website, visit our FAQ.] Dianetics-seminar. Official Church of Scientology: Dianetics, Videos, L. Ron Hubbard Book, Auditing, What is the Mind.

The Dianetics symbol uses the Greek letter delta as its basic form. 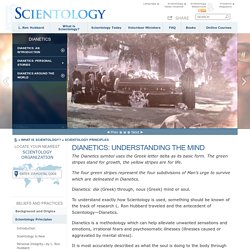 The green stripes stand for growth, the yellow stripes are for life. The four green stripes represent the four subdivisions of Man's urge to survive which are delineated in Dianetics. Dianetics: dia (Greek) through, nous (Greek) mind or soul. To understand exactly how Scientology is used, something should be known of the track of research L. Ron Hubbard traveled and the antecedent of Scientology—Dianetics. Dianetics is a methodology which can help alleviate unwanted sensations and emotions, irrational fears and psychosomatic illnesses (illnesses caused or aggravated by mental stress).

It is most accurately described as what the soul is doing to the body through the mind. Prior to 1950, prevailing scientific thought had concluded Man’s mind to be his brain, i.e., a collection of cells and neurons and nothing more. L. Ron Hubbard and The Church of Scientology. L. Ron Hubbard Quotes and Biography Resources (elrond hubbard) L Ron Hubbard is known world over as the founder of the Scientology religion. 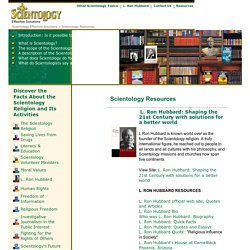 A truly international figure, he reached out to people in all lands and all cultures with his philosophy, and Scientology missions and churches now span five continents. View Site: L. Ron Hubbard: Shaping the 21st Century with solutions for a better world. Scientology, What is it? - L. Ron Hubbard. Most published works by one author. Understanding Scientology / Chapter 2: L. Ron Hubbard.

Understanding Scientology, by Margery Wakefield - Next - Previous Chapter 2 To his followers, L. 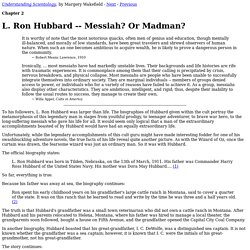 Ron Hubbard was larger than life. The biographies of Hubbard given within the cult portray the metamorphosis of this legendary man in stages from youthful prodigy, to teenager adventurer, to brave war hero, to the long-suffering messiah who gave his life for all. It would seem only logical that a man of the extraordinary accomplishments boasted of by Hubbard would have had an equally extraordinary life. Unfortunately, while the legendary accomplishments of this cult guru might have made interesting fodder for one of his swashbuckling adventure novels, the true facts of his life reveal quite another picture. The official biography states: L. Ron Hubbard, The Poet/Lyricist (Poems by L. Ron Hubbard) L. 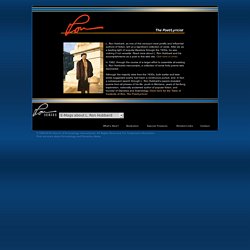 Ron Hubbard, as one of this century’s most prolific and influential authors of fiction, left us a significant collection of verse. After all, as a leading light of popular literature through the 1930s, he was nothing if not versatile. Read more about L. WISE — World Institute of Scientology Enterprises. The story of system of management and how WISE itself came into existence begins on May 9, 1950, when released his monumental and definitive work on the human mind, Dianetics: The Modern Science of Mental Health. 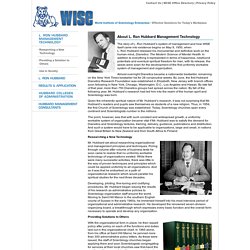 In addition to everything it represented in terms of happiness, newfound potentials and eventual spiritual freedom for man, with its release, the seeds were sown for the development of the first uniformly workable system of management and organization. Almost overnight Dianetics became a nationwide bestseller, remaining on the New York Times bestseller list for 28 consecutive weeks. By June, the first Hubbard Dianetics Research Foundation was established in Elizabeth, New Jersey with branch offices soon following in New York, Chicago, Washington, D.C., Los Angeles and Hawaii. By late fall of that year, more than 750 Dianetics groups had spread across the nation. The music of L. Ron Hubbard: Space Jazz and other Scientology albums. Photo illustration by Lisa Larson-Walker The early 1980s were a particularly strange time for Scientology. 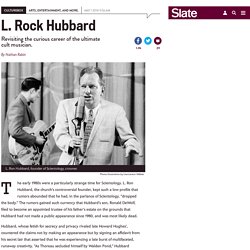 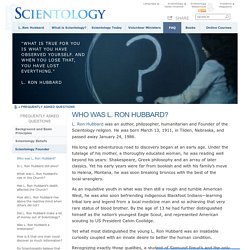 Ron Hubbard was an author, philosopher, humanitarian and Founder of the Scientology religion. He was born March 13, 1911, in Tilden, Nebraska, and passed away January 24, 1986. His long and adventurous road to discovery began at an early age. Under the tutelage of his mother, a thoroughly educated woman, he was reading well beyond his years: Shakespeare, Greek philosophy and an array of later classics.

Yet his early years were far from bookish and with his family’s move to Helena, Montana, he was soon breaking broncos with the best of the local wranglers. As an inquisitive youth in what was then still a rough and tumble American West, he was also soon befriending indigenous Blackfoot Indians—learning tribal lore and legend from a local medicine man and so achieving that very rare status of blood brother. Yet what most distinguished the young L. Scientology Basics. Scientology is a very new religion that has quickly become a world religion in terms of number of adherents and global reach.

While firm estimates are hard to verify, analysts estimate that up to 20 million people identify as adherents, and the religion has over 4000 groups, missions and churches in over 200 countries. It has grown especially fast in the last decade or so, faster than in all the previous decades combined. Some scholars say it's the fastest growing religion in the world. What is scientology? What does the word itself mean? This religion was classified by the United States tax code as a religious organization in 1993.

Click the links below to learn more about Hubbard and the central beliefs of this newest of world religions.