The Feynman Hypothesis. In preparation for giving one of the talks I am required to give to complete my PhD, I’ve been reviewing some of the greatest physics stories. 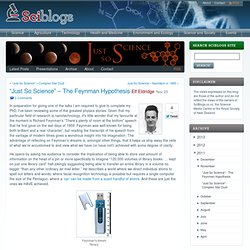 Given that my particular field of research is nanotechnology, it’s little wonder that my favourite at the moment is Richard Feynman’s “There’s plenty of room at the bottom” speech that he first gave on the last days of 1959. Feynman was well known for being both brilliant and a real ‘character’, but reading the transcript of his speech from the vantage of modern times gives a wondrous insight into his imagination.

The advantage of reflecting on Feynman’s dreams is, amongst other things, that it helps us strip away the veils of what we’re accustomed to and view what we have (or have not!) Achieved with some degree of clarity. Feynman's dream 'library' You don’t like it? Go somewhere else. Tractor beams on full! First steps towards light-based tractor beams. The tubes of the Internet saw some extra traffic recently when NASA announced funding for a team of researchers to study tractor beams. 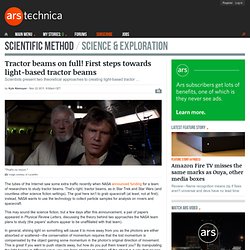 That’s right, tractor beams, as in Star Trek and Star Wars (and countless other science fiction settings). The goal here isn’t to grab spacecraft (at least, not at first); instead, NASA wants to use the technology to collect particle samples for analysis on rovers and spacecraft. This may sound like science fiction, but a few days after this announcement, a pair of papers appeared in Physical Review Letters, discussing the theory behind two approaches the NASA team plans to study (the papers' authors appear to be unaffiliated with that team).