Science communication potpourri. Over the past few days I’ve been following ScienceOnline2012, mostly via twitter. 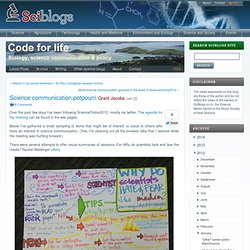 The agenda for the meeting can be found in the wiki pages. Below I’ve gathered a small sampling of items that might be of interest or value to others who have an interest in science communication. (Yes, I’m cleaning out all the browser tabs that I opened while the meeting was hurtling forward.) There were several attempts to offer visual summaries of sessions. For Why do scientists hate and fear the media? A good written follow-on to this session can be read at the Genomics Blog of GenomeAlberta. For all writers, or writers-to-be, Maryn McKenna’s concise but excellent summary of tools for writers is worth investigating. The self-same Maryn McKenna has provided a Storify account of David Dobbs and Deborah Blum’s session about shape and music as guides to long-form writing structure, which received critical praise. Vitamin C as cancer treatment – Sir Paul Callaghan reviews his trial.

In New Zealand we received news some time ago that well-respected physicist Paul Callaghan was trying vitamin C therapy for his cancer. 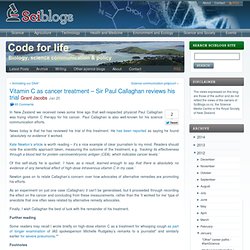 Paul Callaghan is also well-known for his science communication efforts. News today is that he has reviewed his trial of this treatment. He has been reported as saying he found ’absolutely no evidence’ it worked. Kate Newton’s article is worth reading – it’s a nice example of clear journalism to my mind. Readers should note the scientific approach taken, measuring the outcome of the treatment, e.g. ’tracking its effectiveness through a blood test for protein carcinoembryonic antigen (CEA), which indicates cancer levels.’ Why I refuse to be a spectator. Last weeks series in the NZ Herald on ‘alternative relaxation and remedies’ got quite of few of us peeved here at Sciblogs. 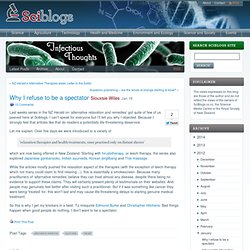 I can’t speak for everyone but I’ll tell you why I objected. Because I strongly feel that articles like that do readers a potentially life-threatening disservice. Let me explain. Over five days we were introduced to a variety of ‘relaxation therapies and health treatments, once practised only on distant shores’ What is the Difference Between a Naturopath and a Homeopath?

This week there have been several articles in the media about homeopathy, including one online at stuff.co.nz. 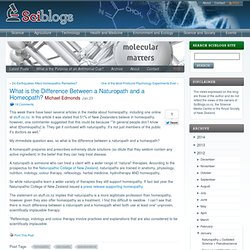 In this article it was stated that 51% of New Zealanders believe in homeopathy, however, one commenter suggested that this could be because “”In general people don’t know what it[homeopathy] is. They get it confused with naturopathy. Citizen Science – Globe at Night. Ah, citizen science. 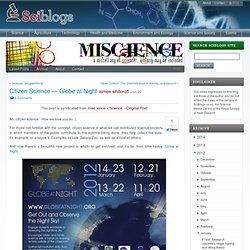 How we love you so :) For those not familiar with the concept, citizen science is what we call distributed science projects in which members of the public contribute to the science being done: they help collect the data, for example, or analyse it. Examples include Galaxy Zoo, as well as a host of others. And now there’s a beautiful new project in which to get involved, and it’s far from time-heavy: Globe at Night. As part of this project – which runs over four different periods this year – one takes naked eye observations of the night sky, the idea being to track the effect of light pollution all over the world. The GLOBE at Night program is an international citizen-science campaign to raise public awareness of the impact of light pollution by inviting citizen-scientists to measure their night sky brightness and submit their observations to a website from a computer or smart phone.

In order to take part, one has to: 1) Find one’s latitude and longitude. Sciblogs Events.

Plan hatched to view Milky Way's black hole heart. High performance access to file storage A conference being held this week in Arizona will lay the groundwork for an attempt to visualize the supermassive black hole that resides at the heart of our galaxy. 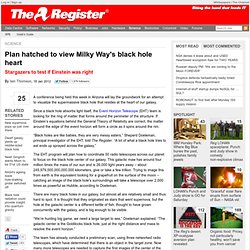 Since a black hole absorbs light itself, the Event Horizon Telescope (EHT) team is looking for the ring of matter that forms around the perimeter of the structure. If Einstein’s equations behind the General Theory of Relativity are correct, the matter around the edge of the event horizon will form a circle as it spins around the rim. “Black holes are like babies, they are very messy eaters,” Sheperd Doeleman, principal investigator of the EHT, told The Register. “A lot of what a black hole tries to eat ends up sprayed across the galaxy.” The EHT program will plan how to coordinate 50 radio telescopes across our planet to focus on the black hole center of our galaxy. There are many black holes in our galaxy, but almost all are relatively small and thus hard to spot. Multicellular Life Evolves in Laboratory.

An evolutionary transition that took several billion years to occur in nature has happened in a laboratory, and it needed just 60 days. 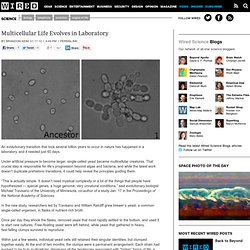 Under artificial pressure to become larger, single-celled yeast became multicellular creatures. That crucial step is responsible for life’s progression beyond algae and bacteria, and while the latest work doesn’t duplicate prehistoric transitions, it could help reveal the principles guiding them. “This is actually simple. It doesn’t need mystical complexity or a lot of the things that people have hypothesized — special genes, a huge genome, very unnatural conditions,” said evolutionary biologist Michael Travisano of the University of Minnesota, co-author of a study Jan. 17 in the Proceedings of the National Academy of Sciences. In the new study, researchers led by Travisano and William Ratcliff grew brewer’s yeast, a common single-celled organism, in flasks of nutrient-rich broth.