The Science of Architecture. We sometimes get things appearing out of left field that proves to be thought provoking beyond its original purpose. 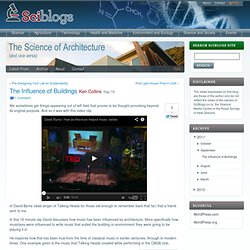 And so it was with this video clip of David Byrne (lead singer of Talking Heads for those old enough to remember back that far) that a friend sent to me. In this 16 minute clip David discusses how music has been influenced by architecture. More specifically how musicians were influenced to write music that suited the building or environment they were going to be playing it in. He explores how this has been true from the time of classical music in earlier centuries, through to modern times. One example given is the music that Talking Heads created while performing in the CBGB club, Where’s my Robot? [Part 1] Robots have been a promise and a fear for the last century. 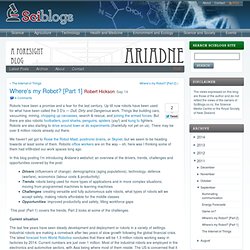 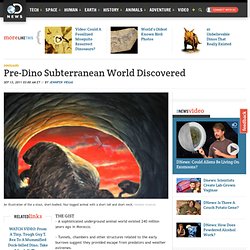 Astronomers discover a wretched hive of scum and villainy. PHD Comics Movie is coming, providing an inside view of science. Earlier this year, graduate students suddenly found themselves deprived of a major source of procrastination when updates of the Piled Higher and Deeper (PHD) Comics suddenly reduced to trickles. The hiatus led to a widespread speculation that Jorge Cham, the creator of the comics, fell victim to (*gasp*) procrastinitis after advocating for the habit over many years through his worldwide speech tour titled "the Power of Procrastination. " Knowledgeable individuals protect the wisdom of crowds. Science Magazine: Sign In. Jellyfishes have functionally replaced several overexploited commercial stocks of planktivorous fishes. 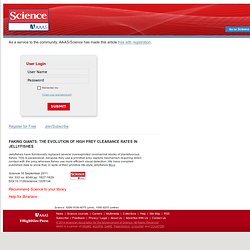 Where Can You Put Solar Panels? Almost Anywhere You Want. If you've given any thought to the benefits of solar power, you've probably realized at least two things: You need to live in a sunny climate and, most importantly, you need to have your solar panels facing south. Without these things, the conventional wisdom goes, you're not going to get much benefit from a solar array. A west-facing roof in Seattle? Polio in India: going, going, gone? India, ravaged by polio like no other place on the planet, has seen only a single case this year, back in January. 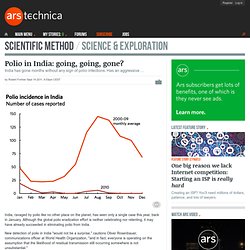 Although the global polio eradication effort is neither celebrating nor relenting, it may have already succeeded in eliminating polio from India. One Per Cent: Stealth tank morphs to transmit QR codes. Niall Firth, technology editor (Image: BAE Systems) They're more commonly seen on the side of drinks cans or on adverts to direct you to company websites. But now QR codes - the fuzzy squares of data that can be scanned with a smartphone - could be projected into the sides of tanks to send covert information, using only heat. Defence firm BAE Systems has developed a technology called Adaptiv, which uses hexagonal tiles that can change temperature to hide or even disguise a tank's infra-red signature. At the defence industry exhibition (DSEI) in London, UK, BAE demonstrated how input from a tank's on-board software can heat or cool the individual tiles to either hide the vehicle from enemy infrared sensors.

Coffee binging ‘genetic’ “With caffeine impacting gene expression, we believe that caffeine then influences chemical pathways in the body. 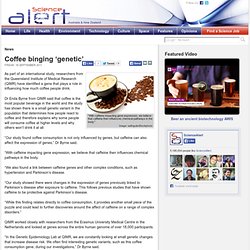 " Image: salihguleriStockphoto As part of an international study, researchers from the Queensland Institute of Medical Research (QIMR) have identified a gene that plays a role in influencing how much coffee people drink. Dr Enda Byrne from QIMR said that coffee is the most popular beverage in the world and the study has shown there is a small genetic variant in the population that determines how people react to coffee and therefore explains why some people will consume coffee at higher levels and why others won’t drink it at all ”Our study found coffee consumption is not only influenced by genes, but caffeine can also affect the expression of genes,” Dr Byrne said. “With caffeine impacting gene expression, we believe that caffeine then influences chemical pathways in the body. 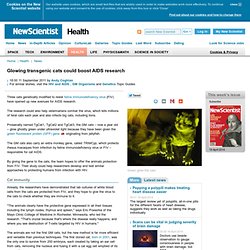 The research could also help veterinarians combat the virus, which kills millions of feral cats each year and also infects big cats, including lions. Prosaically named TgCat1, TgCat2 and TgCat3, the GM cats – now a year old – glow ghostly green under ultraviolet light because they have been given the green fluorescent protein (GFP) gene originating from jellyfish. The GM cats also carry an extra monkey gene, called TRIMCyp, which protects rhesus macaques from infection by feline immunodeficiency virus or FIV – responsible for cat AIDS. By giving the gene to the cats, the team hopes to offer the animals protection from FIV.

Cat immunity Already, the researchers have demonstrated that lab cultures of white blood cells from the cats are protected from FIV, and they hope to give the virus to the cats to check whether they are immune to it. More From New Scientist. Nasa unveils most powerful rocket. Last updated 06:40 15/09/2011 Nasa has unveiled plans for a mammoth deep-space rocket to carry astronauts to the moon, Mars and other destinations beyond the International Space Station. 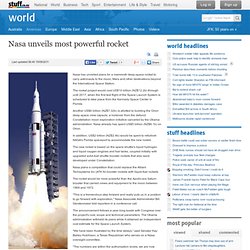 The rocket project would cost US$10 billion (NZ$12.2b) through until 2017, when the first test flight of the Space Launch System is scheduled to take place from the Kennedy Space Center in Florida. Another US$6 billion (NZ$7.32b) is allotted to building the Orion deep-space crew capsule, a holdover from the defunct Constellation moon exploration initiative canceled by the Obama administration. Nasa already has spent US$5 billion (NZ$6.1b) on Orion. Downunder bid for powerful radio telescope. Last updated 10:54 16/09/2011 Australia and New Zealand have submitted an official bid to host the world's most powerful radio telescope, the Square Kilometre Array (SKA). 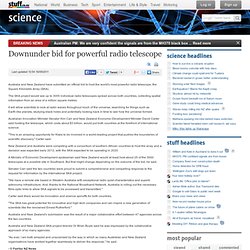 The SKA project would see up to 3000 individual radio telescopes spread across both countries, collecting spatial information from an area of a million square metres. It will allow scientists to look at radio waves throughout much of the universe, searching for things such as Earth-like planets, studying black holes and potentially looking back in time to see how the universe formed. Australian Innovation Minister Senator Kim Carr and New Zealand Economic Development Minister David Carter said hosting the telescope, which costs about $3 billion, would put both countries at the forefront of international science.