SAGE. TreeHugger. Home. Environmental News and Information. It's our Future. Choose wisely. Cool IT leaderboard. Techmeme. Energy [R]evolution. The Energy [R]evolution Scenario has become a well known and well respected energy analysis since it was first published for Europe in 2005. 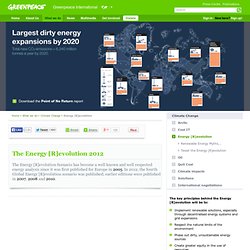 In 2012, the fourth Global Energy [R]evolution scenario was published; earlier editions were published in 2007, 2008 and 2010. The Energy [R]evolution 2012 provides a consistent fundamental pathway for protecting our climate through investment in renewable energy. Tech Planet Journal. For a sustainable and desirable future. Search spi resources by topic. CleanTech Future Conference II - San Francisco. In a certain present there is more of the future than in the future.

Environmental News, Commentary, Advice. GREEN POWER SCIENCE. Renew Economy - News and analysis for the clean energy economy : Renew Economy. The Story of Stuff. Earth Day from Space. There are many ways to celebrate Earth Day, from sustainability efforts (and check out our new blog, Guilty Planet) to simply appreciating nature. 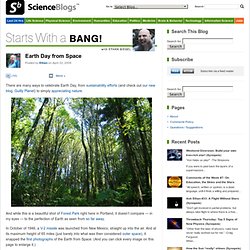 The 7 Most Terrifyingly Huge Things in the History of Nature. Antlers Twice the Size of a Man If there existed an award for "Most Underrated Badass" in the animal kingdom, the winner would probably be deer. 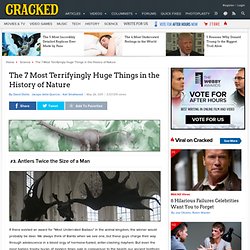 The plant is estimated to weigh collectively 6,000,000 kg (6,600 short tons),[4] making it the heaviest known organism.[5] The root system of Pando, at an estimated 80,000 years old, is among the oldest known living organisms.[6][7] Pando is located 1 mile southwest of Fish Lake on Utah route 25.[8] in the Fremont River Ranger District of the Fishlake National Forest, at the western edge of the Colorado Plateau in South-central Utah, at N 38.525 W 111.75. Michael Specter: The danger of science denial. Slavoj Zizek: Catastrophic But Not Serious. Satter and Eilperin failure to demonstrate learning. When delivered, on a silver platter, an opportunity to demonstrate learning and fulfill the Fourth Estate’s essential role of fostering a more informed public, Associate Press reporter Raphael Satter and Washington Post reporter Juliet Eilperin trip over themselves in a rush to press and disseminate deceptive truthiness rather than engage in truthful reporting. 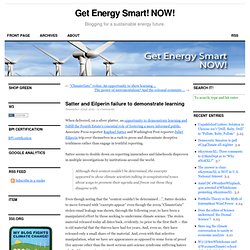 UN in Rome talks over Horn of Africa drought - Africa. As the drought crisis deepens in the Horn of Africa the UN's food agency is holding emergency talks in Rome. 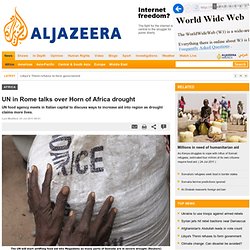 At the top of the agenda will be plans to ensure food packages and aid is delivered into Somalia, which is affected most by the drought. Gulf of Mexico oil spill: BP sues Transocean for $40bn. 21 April 2011Last updated at 02:10 An inquiry found the blowout preventer had snagged on a piece of drill pipe. 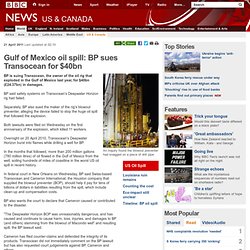 Big Oil's Dirty Secret: There's a Serious Spill Almost Daily in America - Environment. While most people have been paying attention to the debt crisis, another American disaster has been taking place under the radar in Montana. 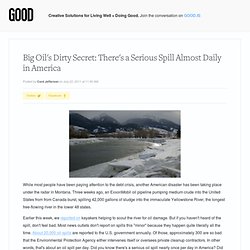 Three weeks ago, an ExxonMobil oil pipeline pumping medium crude into the United States from from Canada burst, spilling 42,000 gallons of sludge into the immaculate Yellowstone River, the longest free-flowing river in the lower 48 states. Earlier this week, we reported on kayakers helping to scout the river for oil damage. But if you haven't heard of the spill, don't feel bad. Most news outlets don't report on spills this "minor" because they happen quite literally all the time. About 20,000 oil spills are reported to the U.S. government annually. Sadly, poison being dumped haphazardly into our soil and waterways by big oil companies has become so common as to be boring to most media outlets. South Africa halts Shell's Karoo gas plans. 21 April 2011Last updated at 17:53 Oil company Shell wants to be the first company to extract shale gas in the semi-arid Karoo region South Africa's government has halted plans by the oil firm Shell to extract natural gas from the Karoo desert by using a method known as "fracking". 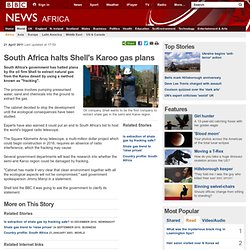 Plastic-Bottle Bulbs Shed Some Light on the Situation - Design. For the millions who live in the shantytowns of the developing world, there are better things to spend money on than electricity. 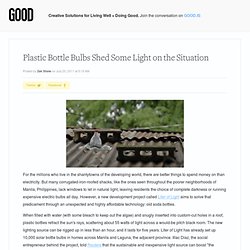 But many corrugated-iron-roofed shacks, like the ones seen throughout the poorer neighborhoods of Manila, Philippines, lack windows to let in natural light, leaving residents the choice of complete darkness or running expensive electric bulbs all day. However, a new development project called Liter of Light aims to solve that predicament through an unexpected and highly affordable technology: old soda bottles. When filled with water (with some bleach to keep out the algae) and snugly inserted into custom-cut holes in a roof, plastic bottles refract the sun's rays, scattering about 55 watts of light across a would-be pitch black room. The new lighting source can be rigged up in less than an hour, and it lasts for five years. Fukushima Nuclear Plant. Barack Obama to press ahead with plans to build new nuclear power stations. 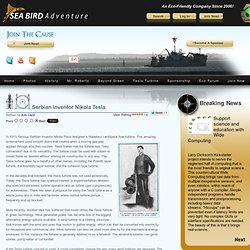 Fear for mass stranding of whales on South Uist. 20 May 2011Last updated at 22:28 Rescue team leader Alasdair Jack says some of the whales have serious head injuries Marine animal experts are preparing for a potential mass stranding of more than 60 pilot whales in South Uist in the Western Isles. The whales were spotted in Loch Carnan on Thursday afternoon and about 20 were said to have cuts to their heads.

If Everyone Moves to the City, What Gets Left Behind? - Environment. Global rural populations will peak in the 2020s, leading to mass abandonment of rural lands. (Data Source: UN Dept. of Economic and Social Affairs, Population Division) Since 2008, more than half of humanity has resided in cities, and city dwellers make up more of the world population each year. Soon more than 25 cities will have populations of 10 million or more. Much has been made of the problems and opportunities presented by swelling urban populations and their impact on the environment.

A growing, affluent urban class drives demand in energy and consumer goods. 7 car-free cities: Independent of the auto. Interested in uplifting stories on the natural world, sustainable communities, simple food, and new thinking on how to live well? Please enter a valid email address and try again! No thanks.